Of course, I mean "fairies" to be taken in a very positive sense, as in wondrous creatures who do are seldom seen as they go about the business of doing things from which many of us benefit. You know, like the Tooth Fairy. I've never seen the Tooth Fairy, but my discarded baby teeth were worth a quarter, which was good enough way back in the day. I've already mentioned the great work done on by NLR Parks, Central Ark. Master Naturalists and mountain bike volunteer groups in clearing the Burns Park and Pfeifer Loop mountain bike trails of recent storm damage. Other groups went to work cleaning up Allsopp Park and Pinnacle Mountain trails.
On Sunday, I loaded up my Niner and Willie dog to check out conditions at Camp Robinson. I had a folding saw in my pack and chainsaw in the truck, but I wasn't necessarily on a work mission. I only had a couple of hours and Willie and I both needed to burn some calories. 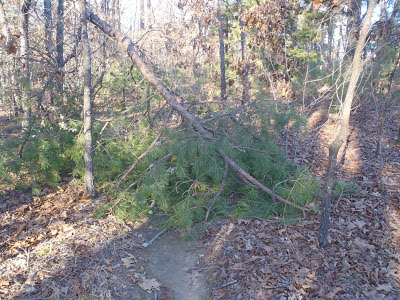 Early on in the ride, I came across an obstacle. 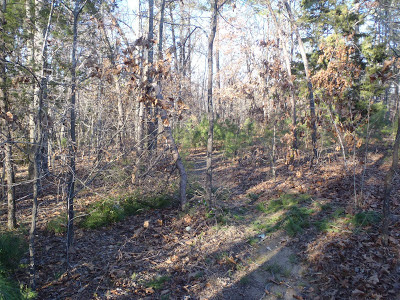 My inexpensive folding saw from Lowe's was surprisingly effective. 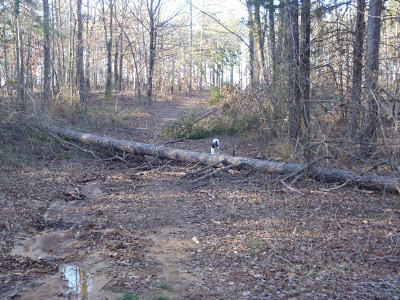 OK, OK. Willie looked a little impatient and slightly disappointed that I did not hop this log as easily as he did.
I had seen signs of trail work all along the way and I soon came upon a common sight on the Camp trails-- Basil Hicks Jr. and III, along with their pack of energetic Irish setters, out clearing trail. 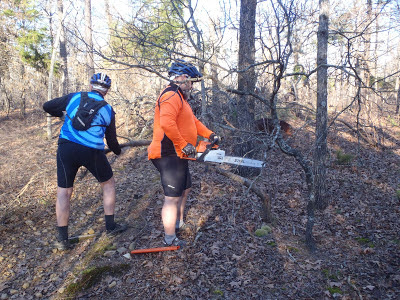 The Basils were getting some serious work done.
I followed the Hicks boys to a point where the trail was blocked and we went to work. After helping for a bit, I headed on up the trail, stopping from time to time to cut out a broken down cedar or white oak. 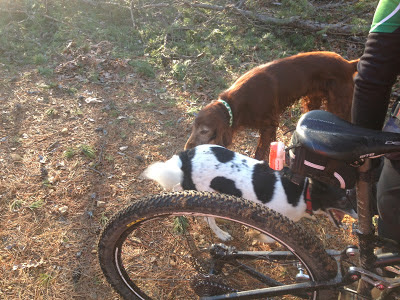 Willie is sociable enough, but having three large, red dogs sniffing his butt made him a little nervous. He would back up under my bike, only to get approached from the other side. 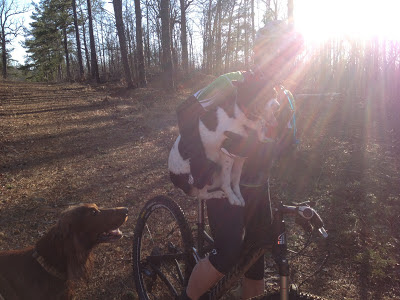 Seeking refuge: Willie had enough and made the leap to my hip without his usual command of "flying dog". He caught me by surprise but I caught him anyway. The halo effect comes from being kind to needy dogs.
The trails at Camp Robinson were in great shape other than the fast-disappearing obstacles. If you're a Central Arkansas mountain biker, you've got to get out there and explore to appreciate the wide range of quality riding opportunities that Camp offers. Remember that a Sportsman's Pass is required. My thanks go out to the core of folks, mostly CARP riders, who regularly contribute their labor to keep this resource in good riding condition for the rest of us.
﻿
﻿
Posted by JBar at 11:30 AM