Dusting It Off: Sofa To Saddle Ain't That Easy

Like many of you, I have spent a significant part of the last two weeks sitting on my ass while indulging in all-too-readily available holiday fare. Yes, I've played in the snow and participated in some very manly chainsaw work, but that has been more than offset by hours of lethargy and recreational dining.
Last Wednesday, determined to overcome the lingering effects of gravity, 10" of snow, and a string of miserable weather days, I ventured out on my road bike for a ride. It was 37 degrees, near dark, breezy, and there was still quite a bit of snow present in the shade ( Though shade implies sun, of which there was none top be seen). In other words, conditions were less than perfect, but I struggled through a fairly uncomfortable hour of freezing fingers before beating a whimpering retreat back to the comfort of my car. Friday saw me doing a short scout on the mountain bike--much more comfortable, but a late start and several detours around downed trees prevented me from getting into much of a groove, but I was on the bike and had a little mud to show for it. 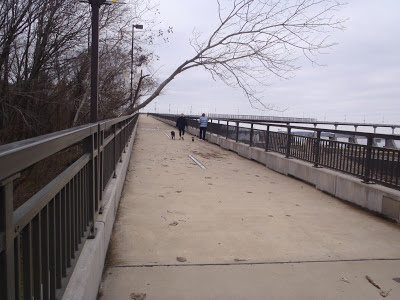 Saturday was another gray day, and even the BDB was not immune from the intrusion of fallen trees.
When Saturday came around, I knew that I had to venture forth with resolve. I e-mailed my small circle of regular ride buddies and got minimal response, the most positive of which closed with "call me in March". Actually, that statement is not true. One guy did commit to the ride. To save him the embarrassment that is to follow, we'll just call him by the pseudonym of "Jason W".  Jason had to beg off so that he could take his Shih Tzu to the groomer while his wife took his son deer hunting. Sonny boy got a doe and Jason got this post and a fluffy pup, but I digress.
Returning to the bike after a layoff  can produce a variety of results ranging from "ugh" to , "Hey, I'm feeling pretty darn good!" I started off with the former and was ready to head home and call 30 miles good, but after running into a couple of acquaintances and extending my ride, I started feeling pretty darn good! I certainly wasn't suffering from overtraining and the legs felt good. There really is something to be said for taking a few days off the bike.
The troops rallied on Sunday, so we had a small band of hearty souls on board to share the chill. There's nothing better than day of brilliant sunshine to awaken slumbering critters from hibernation, even on a still-cold day, and I appreciated the company! 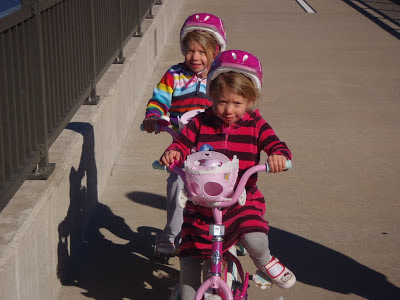 No, these were not my ride partners. Most of my ride partners whine a lot more than these girls. There were a lot of little Christmas bikes on the BDB Saturday, though the lead rider in this pair told me that she got her bike for her birthday. 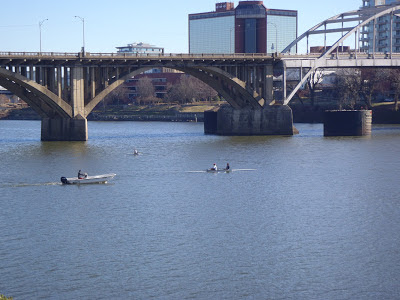 Cyclists were not the only ones anxious to take advantage of the day. The oarsmen from the Boathouse Club were seen getting in a little work near the Broadway Bridge.
Winter can be tough on those of us cyclists who don't have much of a "Plan B" for exercise, so it's important to jump on those opportune days and get in a few miles. Even though a couple of 50-mile days did nothing for my winter weight problem, the effort made me feel better about my slovenly self and put me about 100 miles ahead of my sofa-ridden brethren.