I'll preface my statement by saying that I have assumed for several years that Armstrong doped and I was still a fan. I thought that he came across as properly humbled and quite sincere, but he is SO good at that! 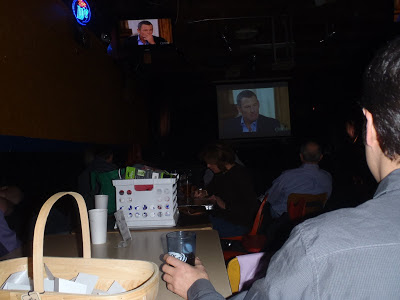 Lance Armstrong interview watch party at Vino's, sponsored by Arkansas Cycling and Fitness.
For me, it brings a kind of relief to hear him say that what most of us have believed was actually true. This may quite possibly just be my nature, but I have a tendency to believe people. That creates a bit of a dilemma when faced with conflicting information, as when almost everybody ever associated with Lance Armstrong has confirmed the doping suspicions, but a angry and earnest Lance is filing and winning lawsuits for defamation and passing drug tests. I think he's an asshole, bully, user, etc, but I still think he won 7 Tours de France against equally doped riders at the top of the peloton. The victims were the folks who refused to dope and who didn't succeed as a result, so it was wrong.
It has been very interesting to listen to the reactions to the interview that are coming out of the mainstream, non-cycling media. Some folks feel that he was not contrite enough and that he still came across as a coldly calculating character. If he had sobbed and begged forgiveness, he would have been painted, and rightfully so, as an insincere fake, because that simply is not who Lance Armstrong is. Cold calculation, even in a humbling public confession, is as much a part of his identity as were the yellow jerseys.
Other people seemed to feel that he owed the public a more detailed account, naming names and gushing details. I think that Armstrong got points with most folks for staying out of the trap of making accusations or providing information about others. He will probably be compelled to do that under oath at some point in time and there was nothing to be gained for pointing fingers in this venue. Most of his answers were direct and most were damning of his actions and character, so they came across as being honestly offered, but, again, Lance is good at that.
I'm still deciding how I feel about all of this, but I will say that I don't feel outrage or disappointment or anger. Too much time has passed and too much has been known or assumed for too long for this to rally strong emotions.
There was little humor in this 90 minutes, though when he was called out about calling Betsy Andrieu a fat, lying bitch. He said, "I never called her fat."
We'll be talking about this some more, I'm sure!
Feel free to comment.
Posted by JBar at 4:58 PM

I just remember how my wife and I taped all those Tour de France races and were glued to the TV every night watching. That certainly was a factor when we got into biking. I'm sorry about this mess, but even if I had assumed all the riders were doping, I still enjoyed all the races immensely.

I care more about this
http://www.dailymail.co.uk/news/article-2265030/Investigation-cop-caught-video-gives-ticket-bicyclist-annoyed-him.html

Lance said his cocktail had three components. If any other doped rider had less than three they were not "equally doped" in my opinion. Great blog Jbar.