...and I'm sure that girls can play, too!
One of the things that marks bridge building is that it seems to take a lot of cranes. These guys can be seen lifting pieces of steel, often weighing thousands of pounds, and precisely setting them or placing them into the hands of workers to be guided into place. This takes place high above the ground or the river. With worker safety and a fortune in equipment involved, one might ask how the operators learn their trade and how are they tested. While heading out of town on a Saturday ride a few weeks ago, I came across a clue as I crossed the BDB. In the open lot near the lock beneath the Big Dam Bridge, a towering red crane was in operation. Nearby were a couple of open barrels and an arrangement of posts that looked somewhat like the setup for a canine agility course. As I watched, the crane operator carefully dropped his hook and ball into one of the barrels. I assumed that this was either training, testing or a competition of some sort, perhaps a crane rodeo. 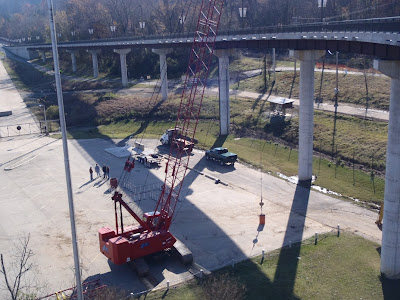 The first test I observed was putting the hook in the barrel. 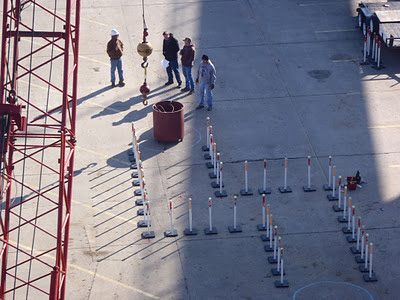 This adds a degree of difficulty. Put the hook in the barrel and get hooked up to the cables. 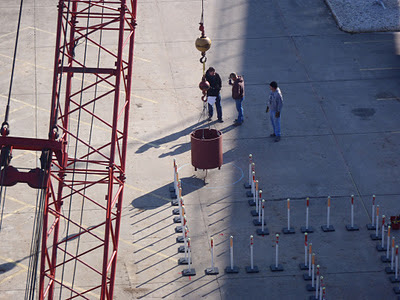 Then, move the load through the course without touching the posts. Remember the old game of "Operation"? I don't, but I'm sure some of you old people do. Actually, I just found that it's still in production, so even non-geezers may identify!
Admittedly, this has only the thinnest connection to cycling, but I'm easily amused and fortunately don't have a blog boss. During the construction of the BDB and the Two Rivers Bridge, we've been able to observe some fascinating construction processes, though far and away the big day for me was being able to watch the lift of the center span of the Two Rivers Bridge﻿. It was remarkable to watch a 208,000 pound 210 foot-long piece of steel set precisely in place by cranes which themselves were on barges in the middle of Maumelle Creek. Impressive stuff to a man who had only the most basic of Erector Sets as a kid.
Posted by JBar at 5:38 PM