I've mentioned before that my mountain biking experience seems to begin anew each fall. It's a little like the movie "Groundhog Day" in that I start over, relearning skills that really should be hard-wired by now but that have faded through a long season on the road. That's not to say that I can't get around on the trail, but I'm way off the back when compared to folks who are rightfully called mountain bikers. Having spent the last couple of days trying to pull out any faint muscle memory from my scant experience on the snow, I can say that I'm probably a better mountain biker than I am skier. By "scant", I mean that I had skied on 4 or 5 occasions over a 12-14 year period of time, with my last trip taking place over 10 years ago. That doesn't translate into any kind of a useful skill set, but at least gave me some confidence that I could get on and off of a lift without humiliating myself and that I was likely to be able to navigate beginner slopes with a few intermediates thrown in.
We travelled with a group from the Little Rock Athletic Club, of which Diane is a member, and we shared digs at Beaver Creek with Richard Machycek and Chrissy Fox along with Casey and Lane Huie. Casey is an old friend of Diane's and his son Lane is a near-local, living in Fort Collins, and everyone but Chrissy and me were on last year's version of the trip, so we settled into the shared space easily. 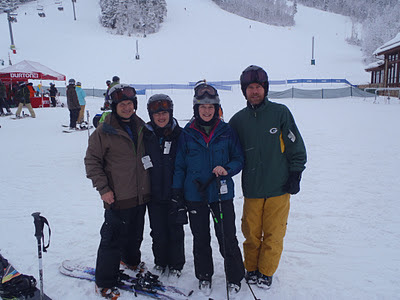 R-L, Richard, Diane, Chrissy, and me, prepared for a perfect powder day. That's what I was told, anyway! 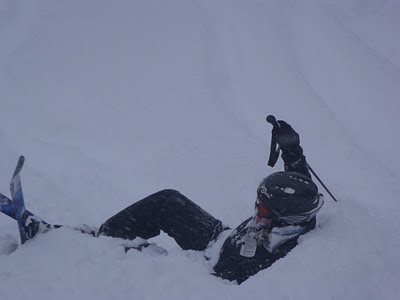 Chrissy loved the powder and couldn't get enough. Accomplished skiers dream of powder days, but for me it definitely added another facet to the challenge.

Proverbs 16:18 warns that "Pride goeth before destruction, and a haughty spirit before a fall."
I got some good advice from the more experienced skiers on the trip and it really helped. I was constantly reminding myself to bend my knees, keep pressure on the tongue of my boots, use the edges, etc., etc., but the little voice in my head also constantly reminded me that I could easily outdistance my abilities.Of course, I had to Google the origin of the more commonly quoted short version, but every time I started feeling a little cocky, I heard the phrase "Pride goeth before a fall". In this case the falls were quite literal and came with fair frequency. 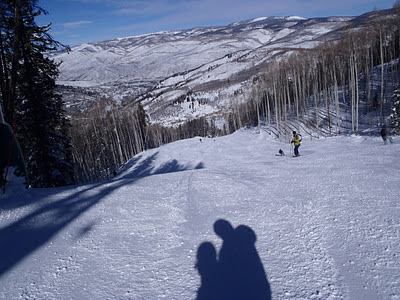 The weather ranged from sunshine to winter storm, but it was all good! This was a blue slope and near the top of my comfort range. 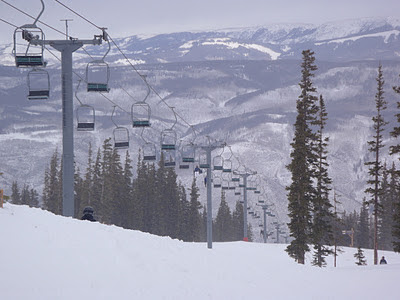 Damn those weekend crowds! Even with fresh powder, the lifts and slopes were uncrowded.

This relates to cycling only in the sense that, like riding and paddling whitewater, skiing is a gravity sport, so there are some similarities in some of the principles; however, in boating, even the inept have a chance of drifting through a rapid unscathed and cyclists can rely on mechanical brakes.  I found that skiing presents some unique challenges that I'd like to explore further, but it's resource intensive to be a skier in Arkansas and I've got a pretty full dance card as is!

Now, I'm looking forward to dry roads and some miles on the bike.