Two Rivers Bridge: We Have Lift Off

After a few delays, the steel center span of the Two Rivers Bridge was lifted into place on Wednesday morning. Everything was ready to go on Tuesday morning, but the first rain we've in over a month came sauntering in and set things back a day. 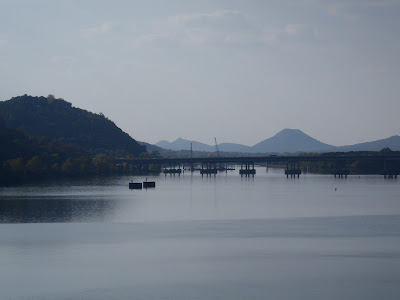 As seen beyond I-430 from the BDB on Sunday evening, the 210 foot truss span had been assembled on barges and moved into place. The cranes were rigged and at the ready.
After a wet, foggy daybreak on Tuesday, the skies rapidly cleared and the lift was underway. As the cranes took on the weight of the 208,000 pound span, their barges got low in the water.

The crane booms were kept pretty much vertical due to the big load. Adjustments in position were in the most part accomplished by moving the barges on which the cranes were mounted.
Crews were busily readying the supports on the pier tops in the final stages of preparation for the lift.
Here it comes, boys!
Almost there.
I've done some construction, but I prefer working at ground level. This is higher than it looks.
The precision of this operation was pretty impressive.

The dance was done.
I watched the lift alongside folks from Pulaski County, from the steel fabricator, Contech, from the designer, Garver, and from the Arkansas Highway and Transportation Department. There was a little anxiety in the air (Will this thing fit??), but it was an experienced team and everyone was very confident in the bridge contractor, Jensen Construction. Nonetheless, everyone was a little relieved when the span was resting on the piers.

Even as the span was being lifted, county officials and representative of the highway department were looking forward to the completion of the Two Rivers project and beyond.
John Ruddell is the project manager for Garver, and he seemed pleased with the way the project is shaping up. Garver also designed the Big Dam Bridge.
As many of you have, I've been keeping up with this project closely since I ride by it many times per week. I appreciated the opportunity to have been on hand with many of the professionals involved in the job when the lift was done. Today marked a milestone in a years-long development and it is always interesting to be able to share the perspectives of the people who make such things happen.
In visiting with Sherman Smith, Pulaski County Public Works director, I found that bids had been let for building a bike path to Maumelle Park from the corner of County Farm Road and Pinnacle Valley Road. This stretch of bike path will be "behind the power lines" so that cyclists will not have interact with vehicular traffic. This will mean a continuous bike route from the River Trail to the Corps of Engineers Maumelle Park. From there, the plan includes bike lanes on Pinnacle Valley Road and Highway 300 to Pinnacle Mountain State Park. This will be a remarkable accomplishment and most of the credit seems to go to Judge Buddy Villines. Along with North Little Rock Mayor Pat Hays, Villines' vision and persistence has helped to create a bike infrastructure that will continue to enhance Central Arkansas's growing reputation as a cycling destination.

Great report and photos! We expect nothing less of top notch journalism from John Barton.

Thanks! I always appreciate comments. Until I discovered that blogger has a "stats" feature, I sometimes wondered if anybody was really reading this stuff. I guess if I get really hungry for feedback, I can start a "Religion and Politics" column.