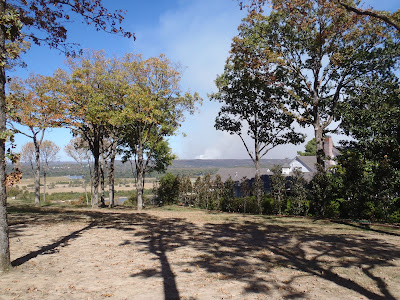 This photo was taken from Palisades Drive in Little Rock, over 12 miles away.
The C.A.R.P. trails were unaffected by the fires, but.....
Timber harvest underway
Thursday evening, I  decided to try to grab an hour on the mountain bike at Camp. I threw a headlight on the bike in the event that I pushed my luck on time or had a breakdown, but the moon is full and I figured to be out of the woods by dark. I headed down the new Shipwreck Trail to Merlin, then hopped over to Christmas Tree. Then came the Airport Loop and Ten Bridges back to the truck. I had a pretty good groove going, when I noticed a couple of trees that had been cut but had not been dropped, leaving them leaning on other trees. That's not a good situation, but it was a calm evening and the tree was stable, so I snapped a photo and rode on by.
The cut-but-standing timber was the first sign that my ride was about to change.
I didn't make it much further before I found the trail blocked.

I rolled the bike a few yards off-trail before I had to pick it up and carry it out.
I regained the trail here and found that I had jumped over to Yucca Trail from Ten Bridges, as all landmarks were pretty well wiped out .

I nosed down Dogwood and found that the skidders had already been in.

I often start my ride by going out Yucca or Ten Bridges, and almost always head down Dogwood when riding Merlin. If I had not taken what for me is an unusual route, I would have been disappointed early and probably would have packed it in since I didn't have time to explore. Instead, blissfully ignorant, I circled the affected area until I headed back to the truck and, as a result, had a really good ride.

Nobody seems to know the full plan for this timber harvest, but it is certain to close many of the trails in the upper part of the training area. Right now, Shipwreck-to-Merlin works, and possibly Five Mile, but it will be a guess until the cut is complete. After that, there's going to be a lot of trail work to be done﻿ and some of the terrain will be very different. Perhaps the creative trail builders will have some ideas for some cool new features.
Posted by JBar at 10:26 PM