And So It Begins: Seasonal Winding Down

The warm weather of the last few weeks has made it easy to forget that it is almost November, but as we learn over and over, time marches on. Those sweat-soaked 30-40 mile evening rides, whether social cruises or heart-thumping group rides, have come to an end. I've tried to take advantage of extended Daylight Savings Time as much as possible,  but my after work rides will soon be limited to a quick 50 minute routine of riding from downtown to the BDB and back. Those rides will begin in dusk and end in darkness, so it's time to replace the batteries in the blinkies that reside on my road bike and get the headlight charged up. I rode in a sleeveless jersey Wednesday night, but a cold front was already roaring our way. Saturday morning was a cold 37 degrees and I was donning long sleeve base  and jacket, tights, ear band, toe covers and full gloves. 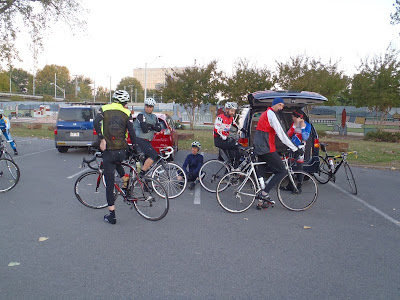 Some of the boys milling around before Saturday's CARVE cruise. The temps were in the high 30's to start, but it was a beautiful day and warmed to near 50 by the time we finished up. 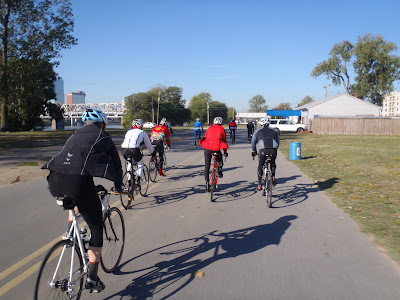 Some of the jackets were unzipped, but it was still cool as the pack rolled back to the sub.
.

A week from Sunday, the clocks get set back and sunset will be at 5:10PM. That is simply rude.
So, do we simply curl up and surrender? Hell, no! We don't simply surrender! We curl up, fret about lost fitness, eat too much, put on a few pounds, then fret about getting fat, and that's just next week! We have months of this shit coming our way. Some redemption will come due to the fact the election will soon be over and I won't have to see another nasty attack ad. I really had not realized that Nancy Pelosi was running for office in Arkansas, but a whole lot of folks seem to be running against her.  As usual, I'll keep slugging away on the bike this winter, driven by fear of fat and lost fitness, and I'll throw in some weight work and a little running. I plan to spend more time on my mountain bike on weekends, which should provide a little intensity. That's about as detailed as a training plan gets for me, but, hopefully, it will be enough to allow me to stay in my race cut jerseys without facing undue ridicule when Spring rolls back around.
Posted by JBar at 12:52 PM

I wish for you a speedy winter.