Oh, Really? On Bikes and Burgers 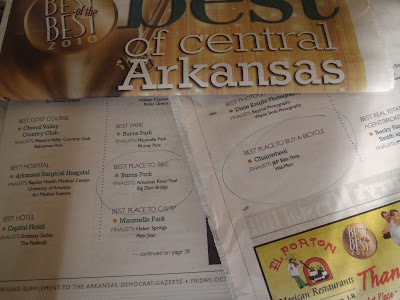 The Arkansas Democrat-Gazette arrived this morning with it's "Best Of.." insert this morning. We're all familiar with these advertising selling vehicles employed by the Dem-Gaz, the Arkansas Times and other print publications. They solicit feedback from readers for opinion on "Best Of.." in every field from neurosurgery to snow cones, aggressively sell ads to everybody mentioned and publish the insert. Of course, I always check out the bike shop ratings. This morning, I was not surprised to see Chainwheel listed as the "Best Place to Buy a Bike" and I pass my congratulations to Pat, Ernie, Sarah and the rest of the crew. They have earned the loyalty of many riders and spawned much of the bike business that has grown up in Central Arkansas. In second place was J&P in Sherwood. Those guy have been around and serve their customers well, so that also made some sense. In third place was Wal-Mart. Wal-Mart?? I would expect Wal-Mart to be the best place to buy dry dog food in the 20 pounds and up category, or perhaps the best place to buy Tide (family size box), but bicycles? Wal-Mart also got top honors for "Best Oil Change and Lube". Burns Park was voted Best Place to Bike, edging out the River trail and BDB. I guess that most folks who ride bikes were out riding their bikes instead of filing out newspaper surveys and most voters have likely never bought a bike. It made a little sense when I scanned the page and saw that under "Best Burgers", Wendy's was the big winner. What? I though sure that McDonald's would have topped that list.

I have some good friends at the Dem-Gaz, but this is the same publication that endorsed Tim Griffin on his principles, so I can't be too surprised.
Posted by JBar at 11:09 AM