So...what are those kickers for?

Some of my nerd friends reported from the Burns Park mountain bike trails that some fellow trail users had been less than polite. Apparently, a number of equestrians had used the trail. I say "apparently" because nobody saw the horses, but they were pretty certain that there had been horses there. 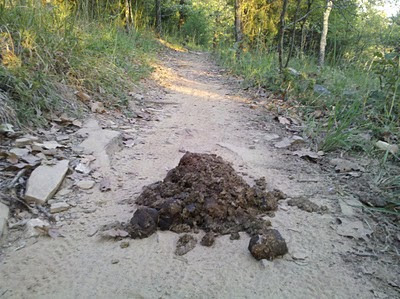 From what I was told, the trail was pretty well littered with gifts like this. Photo compliments of J. Gaston.
I don't blame the horse folks for not wanting to deal with the poop, but if you're going to ride horses on an urban multiuse trail, you need to kick it off of the trail. You'll feel better about it and it will make those shitkickers look and smell authentic.
On a similar thread, Labor Day weekend was cool and sunny, so the crowds came out to the Big Dam Bridge and the Two Rivers Bridge, bringing their dogs but leaving their manners at home. After the published warnings from Judge Villines that dogs could be banned, and the efforts of Nancy Elliott in spending many evenings at the BDB gathering signatures and speaking to dog owners in an effort to prevent the ban of dogs from the bridges, the bridges were a mess after the holiday weekend. Somebody ventured that it has just been too hot for the dogs to poop for awhile, but that's not quite the case. The folks who use the trail year-around seem to know the drill. The regular runners, walkers and riders get along pretty well , as we know what to expect from one another, but the tourists and other people who only show up on peak days seem to leave a trail of complaints and dog turds. They certainly have a right to be there and I'm glad to see the big crowds, but their poor behavior can threaten the privileges of responsible trail users.
Posted by JBar at 9:22 PM

I noticed multiple landmines throughout the burns park trails over the weekend. I almost took pictures, but decided to just keep riding. Watch where you take your lines or step.

I've bumped into a couple of equestrian trail users over the last few weeks in Burns Park. We've had very amicable encounters, especially with me and my MTB yielding the trail when oncoming and asking equestrians how they'd like me to proceed when overtaking.

But, yes, I'd appreciate it if they'd bring pooper scoopers, especially as the horses all seem to know where my good lines are! ;)

I spoke to NLR parks director Bob Rhoads today about the manure on the trail. The riders are obliged to remove it from the paved trails, but not from the dirt trails. Bob is going to look into to the situation and has contacts with the equestrian trail users. The horse folks seem to be a pretty agreeable bunch from what I've seen, but they may not perceive that it's a problem for us. The situation may resolve itself when they become aware of complaints.

Seriously how much did you have to shove together ...that's more along the lines of elephant poop ... NEVER seen a horse poop this much in one spot ... Think someone was pulling a practical joke

Seriously, do you really think that some guy out riding his mountain bike, with absolutely no horse agenda, would actually stop to assemble a mound of horse manure? Mountain bikers around here generally don't have a problem with horses and we all seem to get along fine on the trail. See ya' out there.