From One End To The Other

Things seem to be in a constant state of evolution along the River Trail. The shine is still very much on the new Two Rivers Bridge and now two new features are open for use or soon will be.

From one end....
Next Friday, September 30, dedication ceremonies will be held for both the long-awaited Clinton Park Bridge and the adjacent Bill Clark Wetlands, with the event being kicked off by President Clinton walking across the bridge from North Little Rock, then I assume he speaks, then cyclists are invited to ride en masse across the new bridge. Cyclists who want to participate should meet at the River Market Pavilion at 10:45 on Friday morning to gather with the BACA folks. I would suspect that there will be some waiting around before the riders are dispatched for the grand procession, but it should be fun nonetheless. The bridge will then be open until 2:00PM, after which it will be closed until it is opened to the public on Monday. I'm going to miss the dedication, but will scout out the new bridge very soon thereafter, I'm sure.

There is now a mountain bike trail(in the rough, at least)/hiking trail off of the base of River Mountain Road. It was reported as very rough with plenty of unridable hike-a-bike by some visiting nerds. Initial reports had it only needing a little "riding in", but I'll go with the more recent reports from the folks who have ridden it. Or tried. 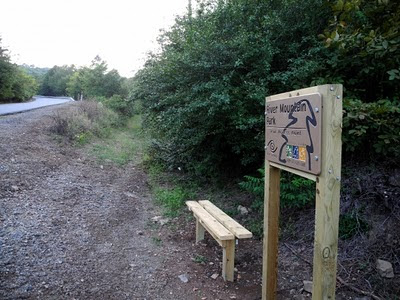 I'll poach this photo from Joe Jacobs's excellent Arkansas Outside blog and then invite you to follow the link above for his article and more photos!
Posted by JBar at 9:11 PM

I recently rode this trail, 1.5 miles each way, I would say it is a beautiful hiking trail, but not much for biking. I would have been faster on foot, on and off the bike multiple times. I highly recommend this trail for hikers and trail runners!!