As the sultry dawn broke over the river Saturday morning, riders, walkers, and runners from all over Central Arkansas were rallying in small groups and converging on the Two Rivers Bridge. As I rode up the River Trail and across the BDB, the bike traffic picked up as groups came together, friends greeted one another and we all rolled out to the new gateway to Two Rivers Park and many miles of primo road rides west of the city! Judge Buddy Villines was present and accounted for as the gates opened at 7:00, not presiding over a ceremony, but passing out free water and encouraging support for Two Rivers Park. 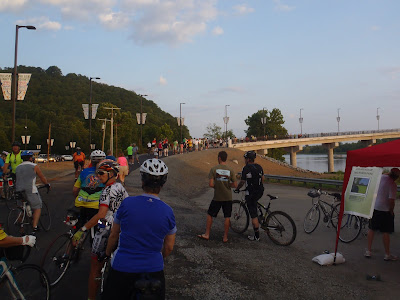 Riders were ready to roll when the gates to Two Rivers Bridge were opened Saturday morning. 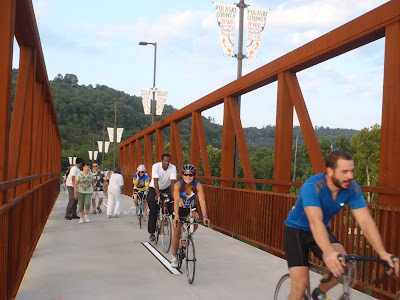 Our friend Chrissy Fox was heading out for some crazy 100 mile Iron Man training ride. She's still the smartest rider in this photo, as she is wearing a helmet and not talking on the phone while riding through a gaggle of riders and oblivious pedestrians. 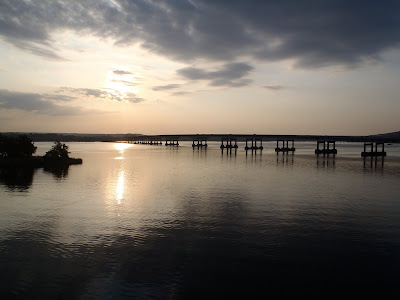 Two Rivers Bridge offers yet another point of perspective for the spectacular views along the river.
It appeared that many of the riders crossing the bridge were simply out for a morning of exploring Two Rivers Park, but many others were eager to head out to Wye Mountain, Pinnacle, the Barrett-Garrison loop and roads beyond. I think it will take awhile for us to fully appreciate the benefits brought by this new trail link. When you consider that we have a system of trails and road routes that extend from Harper's Loop to the east all the way to Pinnacle State Park to the west, all of the possibilities will take some time to explore. TRB is not just a bonus for road riders, either, as a gaggle of my bike-nerd mountain bike friends were heading over the bridge to ride the single-track of the Jack's Fork Trail near the Pinnacle visitor's center. 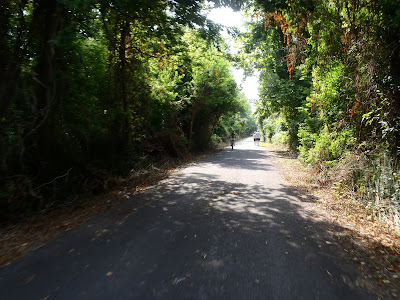 Two Rivers Park offers miles of shady trails, a welcome relief from the hot asphalt of the open road. 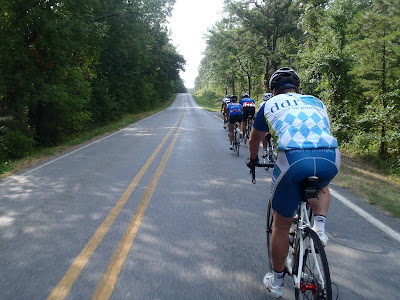 OK, much of the open road was shady, too, for awhile! There was little traffic on Highway 300 this morning, but that is not always the case.
Our little group rode out Hwy 300 past Roland and took Ross Hollow Road up the back side of Wye Mountain. Ross Hollow get very little traffic and is quite scenic. Of course, you still have to climb to get to the top of Wye Mountain, and Ross Hollow teases with a climb, followed by a long descent in which you give back most of your climbing gain, only to resume the climb to the intersection with 300. None of the climbing is too bad and the flying descent down Wye on 300 makes the climb worthwhile. 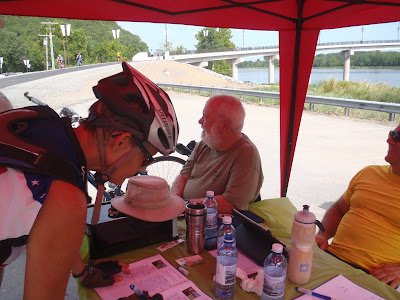 As we returned to town, Judge Villines was still there as folks signed up for the mail list of  Friends of Two Rivers Park, and looking quite pleased at the number of citizens who were out enjoying the new bridge.
The new bridge is a hit! Tell your friends.
Posted by JBar at 2:37 PM

Thanks for posting this. Can't wait to try out TRB but was doing the WampooRoadeo in Scott today. I could have used some of that shade!

I don't know that the act of wearing a helmet makes anyone more or less smart. Helmets aren't required by law in this city/county.

Each person is free to choose whether they want to wear one or not. And the number of people choosing to wear one improperly is rather high (based on unscientific observations of River Trail users).

Whether helmets are required by law is not an issue. My own personal opinion is that properly wearing a helmet is often the difference between catastrophic head injury and walking away. My own recent experience bore that out. To each his own, but my opinion is that riding without a helmet is less wise than wearing one.

I've broken three helments in crashes. One crash was on an easy, Sunday afternoon, bride ride.

You are going to have a lot more ground to report on now!

As far as helmets go, it is good to remember that chains drop, tires slip, and concrete poles don't give. If you want to stay in the gene pool, you should wear one.