Though we are still a couple of weeks away from the "real" opening of the Two Rivers Bridge, the ceremonial ribbon-cutting was held today and riders, walkers, runners and even a couple of in-line skaters got a chance to explore Central Arkansas's newest masterpiece. As announced, Judge Buddy Villines and Transportation Secretary Ray LaHood made short speeches as a very large crowd of cheerful citizens watched on. I want to thank everyone who turned out, as area cyclists were there in force, especially considering the heat and the fact that it took place at midday on Friday. Judge Villines was very appreciative of us coming out to demonstrate to Sec. LaHood the degree of support in our community for projects such as this. The press was well-represented and I feel that everyone left with a very positive impression. 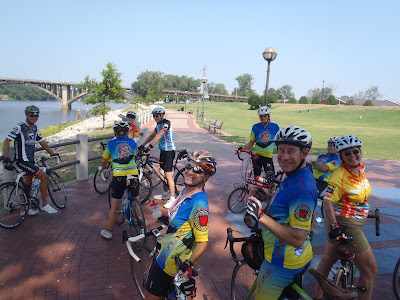 Groups of cyclists gathered at points along the River Trail to ride to the ribbon-cutting. These smiling faces of ABC riders pretty well indicated the mood-of-the-day! 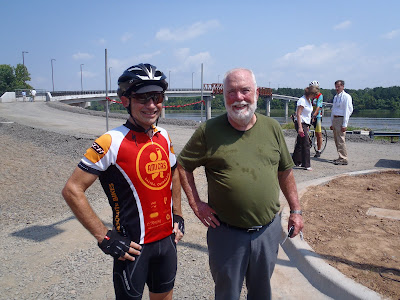 I got a moment to visit and express my gratitude to Judge Buddy Villines  before the formalities began. Thanks to James Gaston for snapping this photo for me. 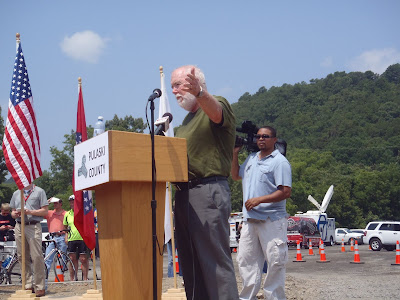 Judge Villines thanked former parks director Julius Breckling, Sec. LaHood, former Transportation Secretary Rodney Slater and others, but we would not have been there without Buddy's vision and ongoing drive to make our cycling and pedestrian infrastructure world class. 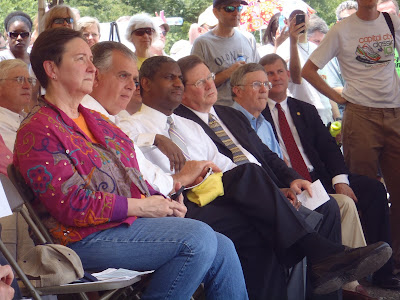 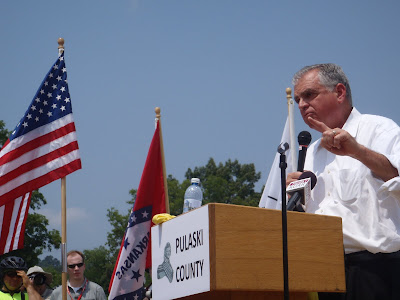 U.S. Secretary of Transportation Ray Lahood is a cyclist and a strong advocate of funding for alternative transportation projects. 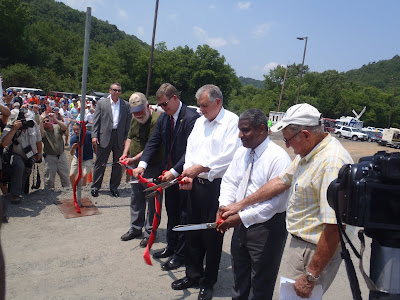 And the ribbon is cut! It was appropriately made of bicycle tubes wrapped in red ribbon. 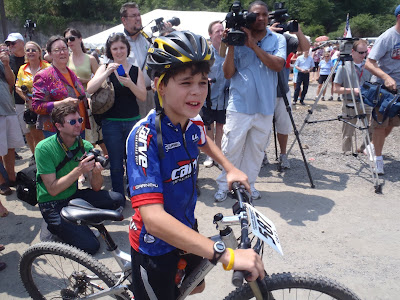 I think this rider said his name was Jordan. He was at the front of the crowd and one of the officials told him he could be the first across after the VIP golf cart, so he immediately became the center of attention of the press. He asked me, "Which camera do I look at?"  Take your pick! 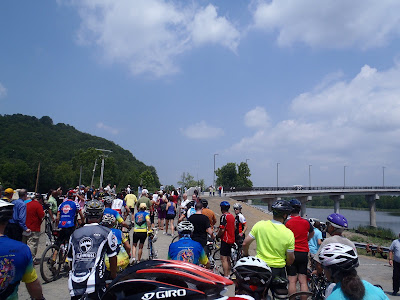 Over we go! I'm a poor estimator of crowds, but I suspect that 100-200 cyclists showed up to demonstrate their support and to get a chance to ride the new bridge, which is a beauty! 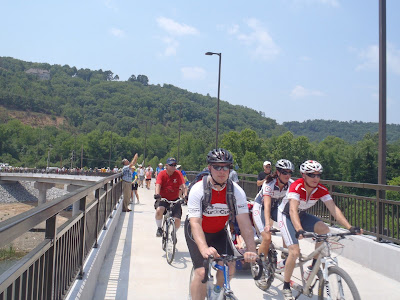 Craig and Elaine Zediker (r) towed their girls across the TRB on the tandem. They'll be representing Competitive Cyclist as they tackle the Leadville 100 mountain bike race on the tandem. We call tandem canoes on the Buffalo "divorce boats", but if anybody can pull this off, it will be the Z's! 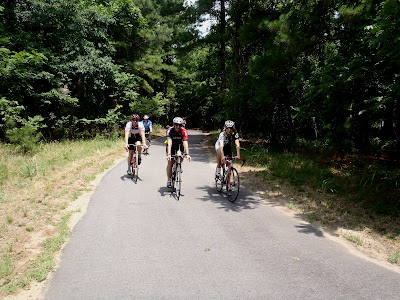 Once you cross the bridge, it's like entering another world! Two Rivers Park is quiet, shady and full of wildlife, a perfect complement to the more urban scene of the River Trail.
Folks, once again, I am very proud of our cycling community and our local governments (OK, Little Rock still has a lot of catching up to do!). I can also tell you that there is more to come. The west approach to the BDB has been funded and there are more ambitious plans for Two Rivers Park. We hear a lot about limiting government spending and there are many vocal critics of this type of project, but I can't think of a better role for government. Alternative transportation resources reduce oil consumption, increase adjacent property values, and enhance the health and fitness of our citizenry. At a time when we're fighting intractable wars that are ultimately over oil, when our air and water resources are threatened, when 3 of 10 Arkansans are obese and 1 in 10 has diabetes, it is time for us to get vocal about supporting changes for the better! One of those changes was dedicated today.
Posted by JBar at 6:08 PM

Cutting projects that reduce our dependence on oil and improve health are penny wise and pound foolish. Which means of course it will be cut and new freeways to nowhere will be funded.