﻿After having spent the week sequestered in Dallas hotels and meeting rooms, I was anxious to get outside and on the bike Saturday. The ride choices were many, but I elected to join my Bike Nerd friends for a ride at Camp Robinson and it turned out to be a good decision. I met some folks face-to-face for the first time and we had a fine ride on trails that were framed in snow, yet were in remarkably good shape. 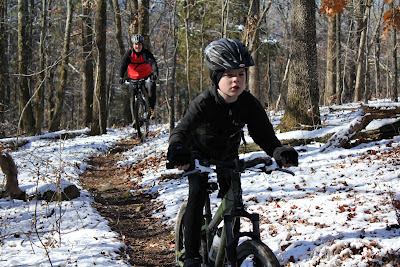 Jarod Yarbrough, followed by his dad, David, enjoying great conditions on Airport Loop. There was no snow at my house about 3 miles away, but the woods at Camp were beautifully dusted with the white stuff.
I had expected it to be really cold on Saturday morning and was therefore appropriately overdressed for the sunny 45 degree weather. ﻿I was also surprised to find the woods decorated with a nice bit of snow, though the sun had cleared the darker trail surfaces making for near perfect riding. There has been a lot of recent activity at Camp Robinson as riders have come to realize that the trails are  open and in great  shape as the result of fairly dry weather and the hard work of a few C.A.R.P. trail builders.  I keep getting corrected when I call them "Trail Fairies", but I mean that in the most positive sense. Riders seldom see the work being done, but it's as if the fairies come in the night and magically make things all better, so you fairies shouldn't be so sensitive. Next thing you know, these guys will take offense at the light-hearted individuals among them being referred to as "gay".
Since the timber harvest was completed, there has already been a lot of progress made toward the re-establishment of trail access. Of note is the fact that Dogwood Trail is now open from the main parking area, thanks to the efforts of the National Guard forester in clearing a path through the debris from the harvest and the work of the Basil Hicks crew in raking and cleaning up. Some other important links have been made to tie the uneffected portions of Ten Bridges and Yucca Trails into a single loop, accessed from the Center Road by way of either the old Yucca or Ten Bridges trailheads. A new patch of trail has been established near the old Christmas Tree that gets riders to the Yucca trailhead and beyond to Christmas Tree. Much of Christmas Tree is trashed,  but it remains a link to Dogwood, Merlin's, Can O Corn and the rest of the lower trails. Riders are realizing that they have been overlooking this valuable jewel of a trail system and trail usage has really been on the upswing. In fact, by Saturday afternoon, 25 riders had checked in to ride at Camp, a far cry from just a few weeks ago when 2-3 sign-ins had become the norm. 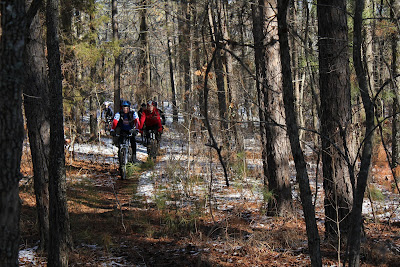 This jolly band of riders enjoyed the Ten Bridges/ Yucca loop, with the scenery enhanced by a little snow cover.
In addition to the leaf clearing efforts that has resulting in miles of clean trail, there has also been some more heavy labor going on. As I cleared leaves on Ball of Nails a while back, Bryan Shipman followed behind moving a bunch or rock from sections of that trail. He later went on a personal mission to improve Elevator. Elevator is a well-placed link in the system, but it has really been nobody's favorite trail. Climbing it's rock strewn off-camber surface could be an exercise in frustration while climbing with pedal strikes on boulders often causing moments involuntary unclipped flailing, stalling and falling. Descents were slow and totally lacking and flow. Unlike a rather infamous declaration of "Mission Accomplished", Bryan's offensive proved to have lasting results. We rode down and then back up and the consensus was that Elevator is a changed trail. 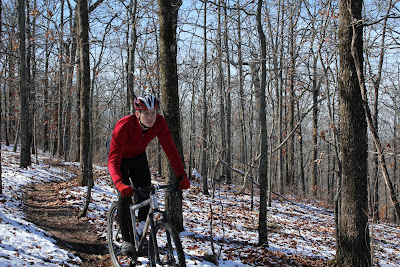 Stephen Durham proves that Elevator is, if not "single-speed friendly", at least single-speed do-able! 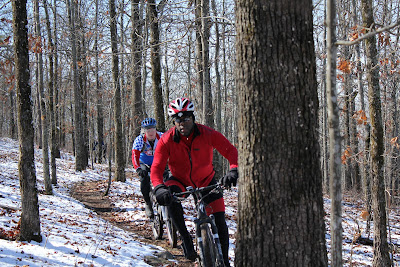 Chris Randle and Bryan Shipman taking the Elevator up. The change at Elevator is a good example of what we can do if we take the personal responsibility to make improvements to things that we usually just complain about. Bryan invested a day of work to implement change that will be appreciated by many people for years to come. 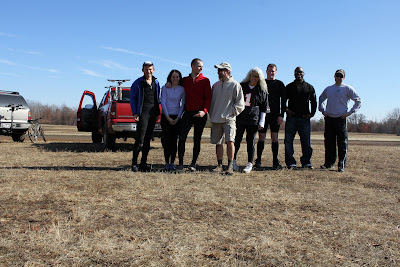 It was all smiles at the end of Saturday's ride. We had covered some good miles and enjoyed the beautiful day among friends.

What's Next For the C.A.R.P. Trails at Camp Robinson?
As noted above, there has been a lot of work done to make the best of current conditions at Camp. The many miles of open trail are in great shape, mostly hard packed and cleared of leaves and debris with only a few muddy spots, probably the best that I've seen them for this time of year. C.A.R.P. is working with the folks at Camp to continue the rehab of trails taken out by the timber cutting and, at the same time, make some improvements to the system. A new network of signs is in the works which will clearly mark trailheads, junctions and emergency pick-up points. The emergency markers will be means for a distressed rider to get help by providing an emergency response phone number and a location designation to allow responders a means to rapidly deploy help to a specific point. These markers will generally be near a road access. My understanding is that the signs are being funded by the purchase of the Sportsman Passes by riders, so our money is going for more than just access. I was also able to sit down with C.A.R.P. president Gary Lamb, Basil Hicks and Bryan Shipman to discuss C.A.R.P.'s status and plans to the trail system. Despite rumors to the contrary, C.A.R.P. is alive and well and moving forward. The consensus was to allow the foresters to complete whatever work they are going to do to help re-establish the trails in the clear cut areas before calling for some work days to complete the task. In the meantime, new routes are being scouted and some minor links are being cleared to maximize the access to the still-open trails.
Even though a C.A.R.P. card is no longer required for access to the Camp Robinson trail system, the club remains as a communications link to Camp and allows us to speak in a unified voice. There have been some complaints about the lack of information regarding the logging activities, but that was not due to a lack of interest or effort from C.A.R.P., and there seems to be a renewed initiative by the folks at Camp to keep us informed, as it is in everyone's best interest. C.A.R.P. also remains as the primary force behind the trail building and maintenance efforts. The National Guard forester is helping do some basic restoration of trails wiped out by the timber harvest, but C.A.R.P. troops continue to provide the vital energy that keeps the system alive, as they have from the humble beginnings of making natural game trails ridable many years ago.