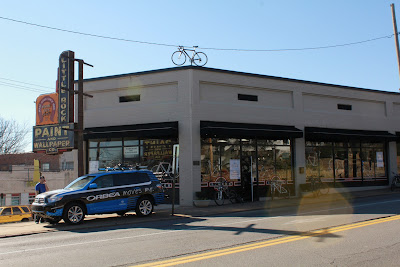 The bike on the roof of Spokes says this isn't a paint store anymore, in spite of the historic sign!
Little Rock's newest bike shop held its Grand Opening on Saturday and I must say that is was quite the party for local cyclists. The weather was as good as one could hope for in January, with sunshine and highs in the 40's, which helped bring out about 20 mountain bikers to join USXC National Champion Georgia Gould for a morning romp through Allsopp Park. I don't think the local boys were able to show her anything new but everyone was pumped after the ride and she has a cadre of new fans. 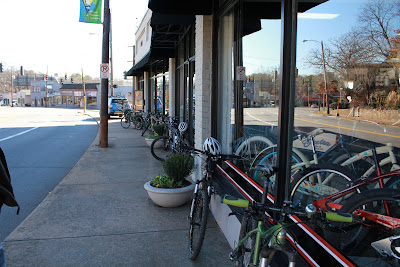 Parking spaces for both cars and bikes were at a premium for the Grand Opening of Spokes. 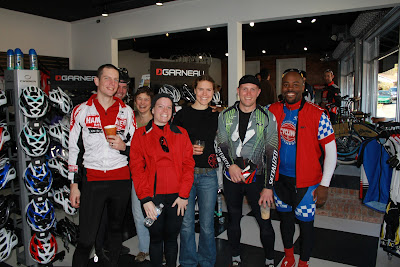 Local Bike Nerds ( I can assure you that I am not insulting these riders!) pose with the charming Georgia Gould shortly after their educational experience of riding the Allsopp Park trails with a US Cross Country and USGP Cyclocross National Champion. 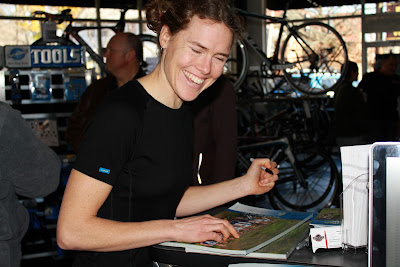 I would like to think that it was my stellar sense of humor that tickled Gould, but that big smile seemed to come easily and naturally to her.
I decided to get my ride in early on Saturday so that I wouldn't be hanging around in my sweaty bibs, so I made the 7:30 CARVE ride, then headed to Stifft Station in time to enjoy some good BBQ, Doma coffee, a bunch of nice swag (or schwag, depending on your position in that spelling discussion), and good company﻿. 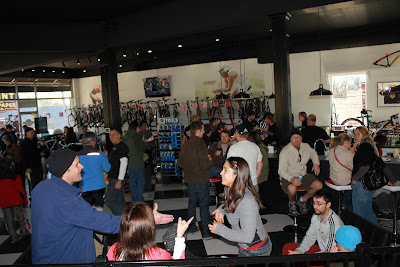 Though this was a new store opening, the event had the comfortable feel of a community event, with many local riders, curious neighborhood residents, friends and casual shoppers dropping in. 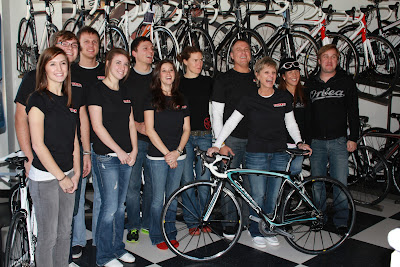 Store owners Mat and Regina Seelinger (with bike) pose with Gould, Suzanne and Tony Karklins of Orbea USA, along with family members and Spokes staff. 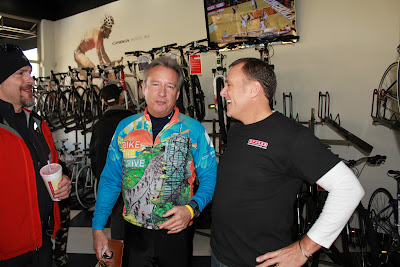 I'm not sure if Mat is laughing with Steve Bentley or at him, but the mood was light at the Spokes opening.
The highlight of the day for me was an appearance by Pulaski County Judge Bubby Villines. After being introduced by Orbea USA's Tony Karklins, Judge Villines spoke about the years of effort to bring us to where we are today with bike infrastructure and the plans for the future, which are ambitious and expansive. That is material for another post or two or six, but I'll just leave it at this: Central Arkansas has bike and pedestrian resources that are unmatched anywhere in many ways and will only get better. 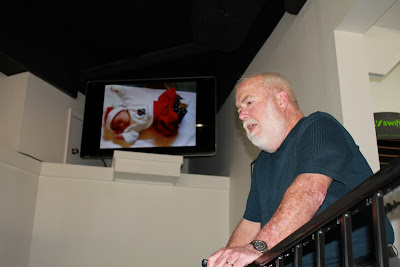 Pulaski County Judge Buddy Villines.
Judge Villines wowed us with a citation of what has been accomplished and what is yet to come for cycling in Central Arkansas. He also reminded us that the biggest benefactors will be future generations, using a photo of his granddaughter as an illustration. He noted that Iroquois Indians had a philosophy of basing decisions on how they affect the next seven generations. That  kind of vision is rare in today's world in which politicians are concerned only with the next election cycle and corporations rarely look beyond the next quarterly report.
The Spokes Grand Opening was a very nice event in every respect and I wish Mat and Regina well with their new store. If the opening was any indication, they will do very well, indeed.
Posted by JBar at 10:13 AM

Awesome shop! I'm so excited to have a quality shop close to home. The coffee rocks too!

So, a coffee shop that sells bicycles? That sounds too fascinating to pass up. Since I live just south of Little Rock, I will get by there soon just to see (and taste) for myself how great it is :-)