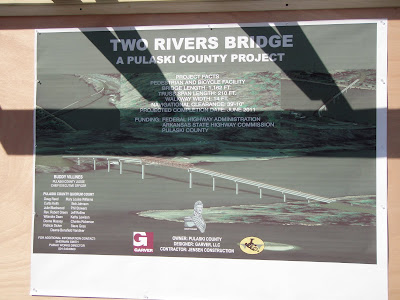 This sign showing the design of the new bridge has gone up. Looks good to me!
It didn't take long for the parking situation at  River Mountain Park to become a problem. All it took was some sunshine, warm temperatures and a weekend to overwhelm the relatively limited parking. From what I've heard, the parking lot at the River Mountain launch ramp was madness on Sunday, lovely day that is was. Even the addition of parking spaces west of the driveway will not be enough to absorb the temporary loss of parking due to the bridge construction. The county has prohibited trailers in the new parking area, and would hope that cyclists would use that area first to allow the more open spaces to be used by boaters and fishermen pulling their rigs.  It's easy for me to say since I can easily access the trail at several points, but I'm going the again suggest that riders with other reasonable access options employ them. West Little Rock and Maumelle folks looking for an option can always jump across the river to Cook's Landing. The best idea, of course, is to ride your bike to your bike ride, but that's not always practical for everyone. Pulaski County is trying to accommodate everyone while Two Rivers Bridge is being built, and I'm sure the different user groups will work out the crowding while the construction is underway. When it's all over, there will be more parking than previously existed and the turn-around will be moved further west, allowing for more traffic-free ride/walk space

While the bridge construction has created some parking problems, the plan is to keep the River Trail open to pedestrians and cyclists for the duration of the project. The contractor appears to be ready to roll, with site work well under way. There is a sign up with a rendition of the new bridge. Another sign is being added that includes information about Two Rivers Park, as it seems many people were unaware that there was a park over there.

I got this story second-hand at best and make no claim of accuracy, but...

While gathering information on the bridge project, I mentioned the problem of car break-ins along that stretch of road. I was told that the police had installed a surveillance camera and caught the culprit on camera. He was pulling up with a bike on his car and milling around as if preparing to ride. When he thought the coast was clear, he'd smash a window, grab some property and drive off looking like any other park patron. After becoming a video star, the culprit was met by Little Rock's finest at the top of River Mountain Road.
Posted by JBar at 8:33 PM

Thanx for the bridge info ... I thought it was going to have a little curve ... And glad hear about the perp