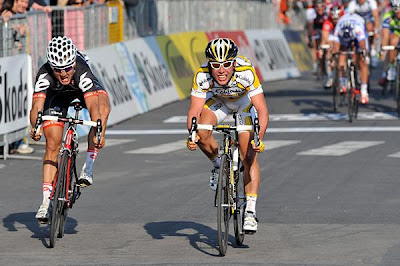 Cavendish at the line: Milan-SanRemo 2009
Photo poached from Cycling News.

This ~180 mile slugfest should be some great racing. Unlike stage racing, there are no time bonuses, no time trials, no second chances. The first man across the line wins. Last year, Mark Cavendish pipped Heinrich Haussler at the line for a dramatic finish. A little road racer named Lance will be getting some attention this year, though I'll be surprised if he is a contender. Ya' just never know!

Update, Fri, March 19: Lance is out for M-SR due to a tummy ache. His nonstart is unlikely to affect the outcome of the race but I'm sure the organizers are disappointed due to the increased interest that his participation would have brought to the event.
Posted by JBar at 5:47 PM