The good news for me is that my business is good. The bad news is that, as a result, I've been working my ass off and haven't had time and energy to ride as much as I'd like, much less keep up with the steady stream of events and ideas for articles. Here's a shot at catching up: 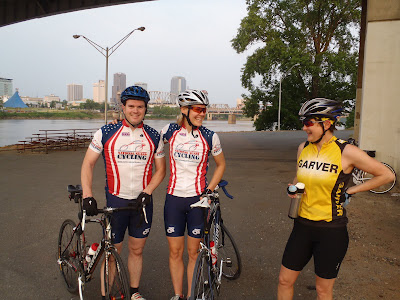 Bryan and Melissa Shipman rolled in with a large group of National Guard Cyclists,
though Diane's Garver bunch once again prevailed in bringing the most riders, something Bryan intends to correct for next year! Good luck, buddy. 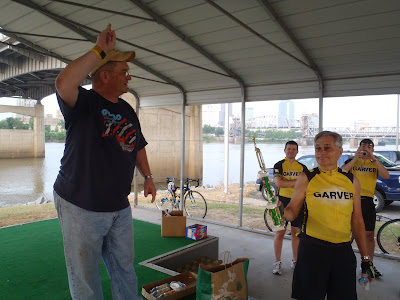 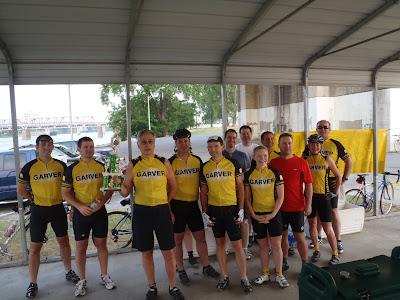 Team Garver with their trophy. Photo by B. Shipman 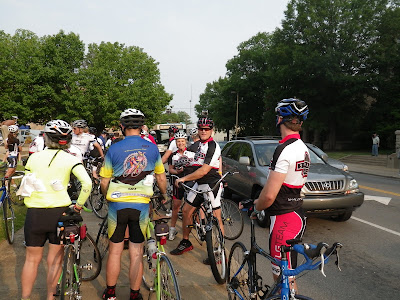 There were activities on both sides of the river. I had to scamper off to work, but the Garver gang rolled across the Broadway Bridge to join the LR festivities. Spokes was well represented, including an appearance by owners Mat and Regina Seelinger on a tandem. Diane has made it clear that she will not ride a tandem with me as pilot.
Want to help that turtle crossing the road? Be sure of your turtle ID! 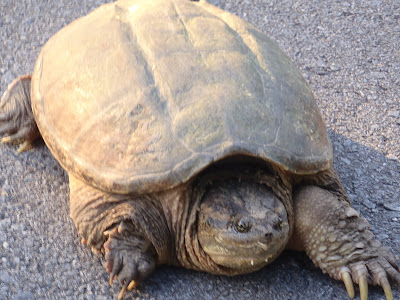 I spotted this guy crossing River Mountain Road Tuesday evening.
As a critter lover, I decided to help this turtle on his way, fearing his demise under the wheels of a speeding car. Being aware of his potential, I gave him a nudge with my foot, which caused him to be flipped onto his back. He was on his feet in an instant, using his long, strong neck, and into an aggressive posture. He's at the top of his food chain and was not going into his shell on my account! I broke off a finger-thick branch from a tree and tried to encourage him along off of the road, resulting in a lightening fast strike that snapped off the end of my stick. His reach was a good 6 to 8". I left it at that and resumed my climb, only to find a visibly shaken good Samaritan in the road as I descended. He had picked the turtle up, only to have the snapper go for him, "He didn't get me, but I felt the wind from the strike. I'm used to box turtles". 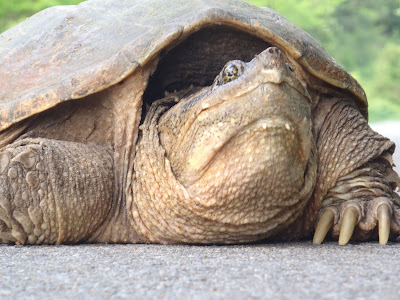 No box turtle! This is a face that only a mother could love.....   This is a snapping turtle. Alligator snappers have pronounced ridges on their back and are equally voracious.
High water is back
The River Trail once again is flooded in some areas, though not nearly as much as we have seen recently. The S-turn bridge and the area near the ski lake/dog park were under water as of Thursday night. 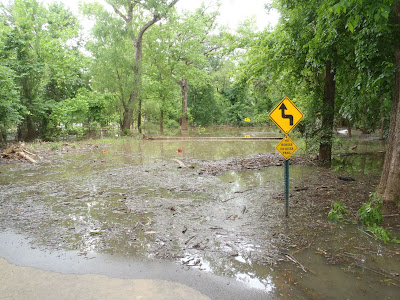 Water once again covers this bridge near the BDB. The weather outlook is dry for the next few days so, hopefully, we'll see a return to lower water levels.
Well, folks, that's all I've got for now. Enjoy the holiday weekend, be safe and try to get in some miles.
Posted by JBar at 4:46 PM

I rode the NLR River Trail on the 29th and other than having to take the detour across the bridge coming from Cooks Landing it was fine. It appears that the "S Curve" was clear so the water must have been over the trail before there.