If A Tree Falls In The Woods, And Nobody Is Around....

...does it still make a sound?  I may have heard an "awshit" or two, but I don't think it came from the tree. As I headed home from a ride on the River Trail Monday evening near dusk, a passing rider called out what seemed to be a warning of something in the trail near the Emerald Park sign. Sure enough, a good-sized tree had fallen across the trail; just fallen, according to some riders who said they'd passed unimpeded only 10 minutes before. 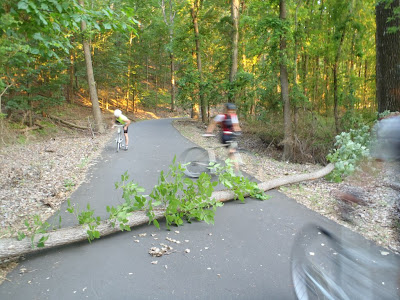 The greenery looks like leaves sprouting from the tree, but it's actually part a very robust poison ivy vine. NLR Parks has been notified and I'm confident that it will be gone by sometime Tuesday morning. 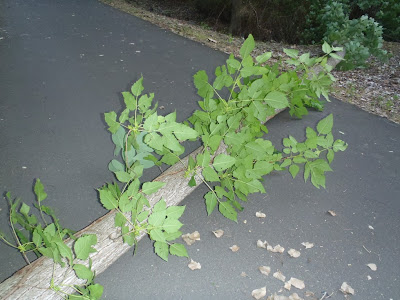 I must admit that I got a little chuckle at the expense of a rider who, while wearing full, over-the-ear head phones and carrying on a phone conversation, failed to hear my warning and stepped right through the poison ivy.
What do you call a gaggle of 'coons?
I was running a little later than planned as I climbed Fort Roots on my way home, but that allowed me to catch sight of a bit of a parade as I approached the gate at the top of the hill. What I first thought to be a line of squirrels parading down the street turned out to be a family of 6 to 8 raccoons. They streamed into a storm drain and what I assume was Momma Coon stood watch as I stayed back and took pictures. Curiosity was getting the better of the kids, as one by one , more little heads appeared. 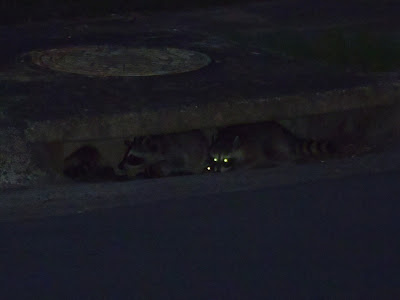 Parts of four coons can be seen in this shot.
I continue to be entertained by life along the river. Within sight of downtown high-rises, we city folks can observe a wide variety of wildlife, there is plenty of good fishing, and things like mulberries, plums and blackberries are there for the picking. I think we have it pretty good with the river painting a nice streak of nature through the middle of town.
Posted by JBar at 10:15 PM