On May 18, 2011 at 7:00 PM, the Ride of Silence will begin in North America and roll across the globe. Cyclists will take to the roads in a silent procession to honor cyclists who have been killed or injured while cycling on public roadways. Although cyclists have a legal right to share the road with motorists, the motoring public often isn't aware of these rights, and sometimes not aware of the cyclists themselves. 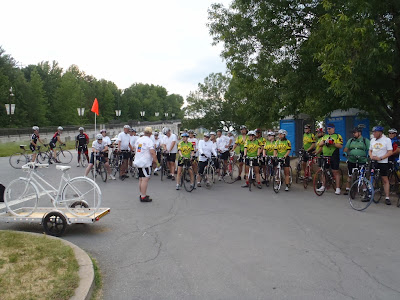 Tom Ezell of BACA reads names from the growing list of fallen Arkansas cyclists. Sadly, a young man passing through White County on a coast-to-coast cycling trip joined the list as he was struck by a vehicle and killed just this week. Ghost Bikes are left at the scene of accidents to remind motorists to watch for cyclists. 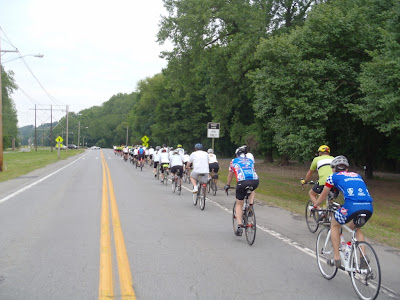 The long procession of cyclists rode in silence two abreast. Motorists were mostly patient, if a little confused. It might be a good idea to have some simple signs posted along the route to inform folks of the intent of the event. 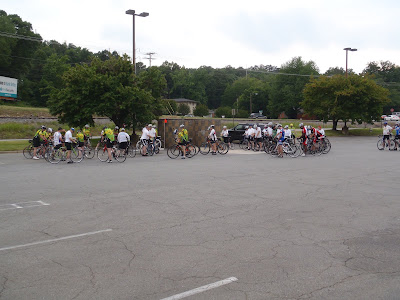 The fallen are remembered at the end of the ride.
The Ride of Silence﻿ can be a good reminder to the driving public that sharing the road and paying attention is a duty. For us, it is a reminder of our vulnerability and of how much we count on the responsible actions of others. Even as we started the ride, my friend Robert was reporting that he and another rider had just descended River Mountain Road with a pissed off driver in a pickup riding their wheel, honking his horn and screaming at them. Needless to say, it was a frightening experience. Too bad the Ride of Silence had not been meeting at the launch ramp.
Be careful out there.

Email ThisBlogThis!Share to TwitterShare to FacebookShare to Pinterest
Labels: Ride of Silence