The water level on the Arkansas River is dropping pretty rapidly, but enough of the River Trail was still underwater Tuesday night to create a dead end at Burns Park west of the soccer fields. The situation demanded a little more imagination than usual to get in some miles, a mild inconvenience and a reminder of how good we've got it with a trail system that normally allows riders to jump on and do any number of routes with nothing in the way of a plan. I dropped by the Specialized bike demo, presented by Arkansas Cycling and Fitness, and then rode upriver toward the BDB to see how far I could get, which turned out to be the last soccer field. It was there that I encountered a crew from Competitive Cyclist bent on riding from CC to join the Tuesday Nitro ride as they pressed on crossing the "deer field" through hub-deep water. I did complete a loop of sorts, riding back downtown, up to the BDB, then rode out to Crystal Hill Rd and back to Burns Park via city streets. 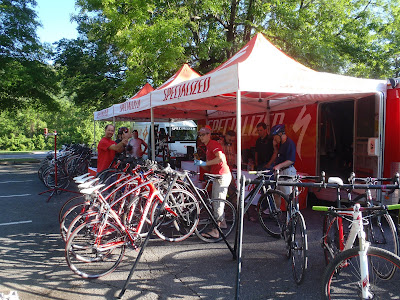 The Specialized bike demo at Burns Park was successful in spite of compromised trail conditions and unusually cool weather. Richard Machycek is showing off his freakishly large hands in response to a comment I made in a recent post. 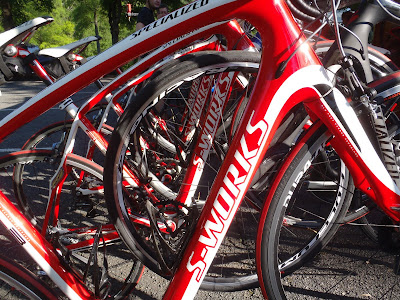 The Specialized Team had a bike for you! 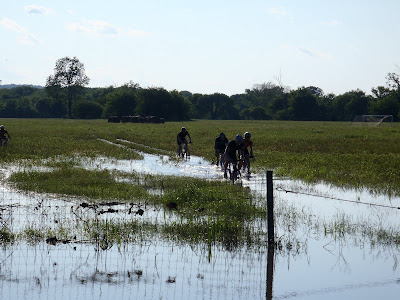 Noah Singer, Ryan Johnson and a couple of other boys were not going to miss Tuesday Nitro! At the rate the river level is falling, we may have dry pavement by Wednesday. 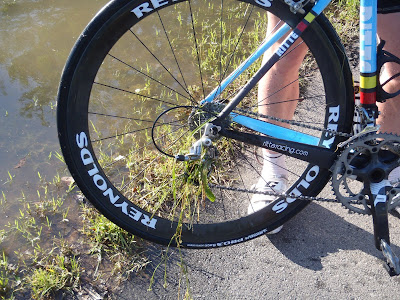 Noah did his part to clear the Yellow Trail equestrian path of vegetation. It's a good thing these guys are in the bike business, as I think they will need to service their hubs and bottom brackets.
New Pavement Markings For the BDB: When all else fails, read the instructions.
Painters had been busy on Tuesday with stencils and a spray rig adding some new messages for Big Dam Bridge users. Walkers are now clearly instructed to keep to the right, while cyclists are advised to reduce their speed on the downhill ramps. Hopefully, this will help interaction on the bridge a bit, as most rudeness is the result of oblivion rather than aggression. 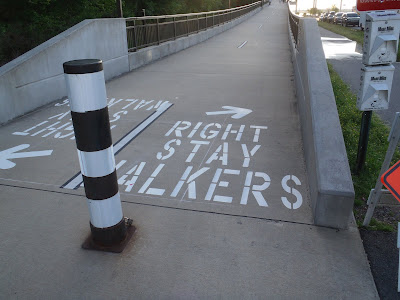 These signs now appear every 500' on the BDB. 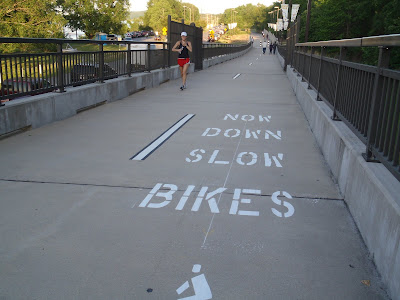 Don't feel left out. There are new instructions for everyone!
As soon as the water recedes and the weather warms to normal, I expect an explosion of trail use, so the signage is probably a good thing. I've heard rumblings that the speed limit on the bridge will be increased from the present silly 5MPH to 10MPH, and that some effort will be made at enforcement. Folks, the rude riders among us can be our worst enemy.I'd rather see riders simply behave responsibly than force the hand of county to call in the law. A strict speed limit should not be required if folks behave responsibly and ride appropriately for the conditions-of-the -day on the BDB.﻿
Posted by JBar at 9:42 AM

So one could ride from NLR to Burns Park, then up to Funland? It sounds from your description that the only submerged part is the section from just below the BDB over to the soccer fields. Correct?

Yup. I did just that last night.

Thanks to reader Shannon for this link to Ark. River levels. According to the tabular data, the river came up about a foot overnight and is peaking. From there, we should see a steady drop in the level.

Bottom line: more of the trail will be underwater Wednesday than there was Tuesday, but it will get better from there!

Could you come across the BDB from LR and circle up around Garver/Garver and make your way back to NLR trail east of soccer fields that way?

I THINK you can cross the BDB and get to Garver OK, but it's unlikely that you can get to the soccer fields tonight. It may be Friday before that's passable, but that is my conjecture.

On Saturday, Cooks Landing Rd was underwater but your link shows it's down a foot since then.

The other option would be take Crystal Hill Road to McArthur and get back to Burns Park that way, but I've not gone that route. As I recall, Crystal Hill gets narrow north of I40.

Cooks Landing road was dry on Saturday (there's a photo from Saturday afternoon a couple of posts back)as it was last night. It was partly covered but ridable tonight. The gate was closed, but you can easily ride around. You can take Crystal Hill Rd. to Kelly, right to MacArthur, right on MacArthur to Parkway, right on Parkway to Burns Park. Hopefully we'll be able to ride a trail loop by the weekend.

I rode my old mtn bike tonight in case I wanted to ford the stream and tried to find a way around by the driving range and then beside Pollution Control, but no dice either way. Looking forward to the weekend and lower water.