Giro d'Italia: A Race To Watch

I know that most of my readers are very aware of the fact that the Giro d'Italia, one of the three Grand Tours, is in its first week. In terms of historical importance, the Giro is second only to the Tour de France and, in some ways, the Giro does more to embrace the challenge and drama of the three week road races that include the Tour, the Giro, and the Vuelta a Espana. After fading in its glory for a few years as many top riders used it for a warm up for the Tour de France, then dropped out after a couple of weeks or simply failed to seriously contest the race, the organizers simply stopped inviting some top teams  who they perceived as not coming to race. That got some attention and the Giro has been re-enlivened by torturous courses, many summit finishes and multiple stretches of strade bianche, or "white road". The strade bianche sections are gravel, many of which cross the highest passes of the stage involved so that riders must both climb and make very technical descents on steep and narrow gravel roads. The course has already taken a bitter toll with the Stage 3 death of Wouter Weylandt but, that tragedy aside, the Giro is a beautiful and it's not on Versus....

…..but, you can watch!
Though US teams and riders have more presence than ever before in the European peloton, the lack of Lance Armstrong means most Americans simply are not interested, so there is limited TV coverage. Universal Sports has come to the rescue! For 14.99 (or, you can get the 19.99 package that includes 5 issues of Bicycling Magazine), you can get both live and delayed feeds of every stage on line. I bought Milan-SanRemo earlier in the spring for 1.99 and was very pleased. The quality is good and it became part of my "library", so I can watch it as many times as I want, though once is usually enough for me. 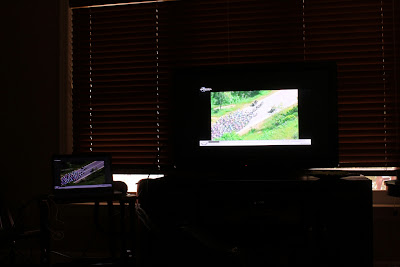 This is my preferred set-up for watching bike races on Universal- HDMI cable from my notebook to the HDTV.
Universal coverage uses the same Italian TV feed that Versus has used in the past, typically showing the last three hours or so of the race. Depending on your point-of-view, it is a good or a bad thing that you don't get Bob Roll, Paul Sherwin, and Phil Liggett commentary. The announcers are OK, but there are long stretches that simply have no commentary and it is sometimes frustrating when they say, "There goes a Liquigas on the escape followed by Aqua-Sapone and a Radio Shack....". I guess I need to have my team rosters close at hand. The upside is that there are virtually no commercials and you can watch on your schedule. Check it out. The best of this race is yet to come, as the mountain top finishes are all yet to come.
Posted by JBar at 5:57 PM

Can I come watch with you? :P