The past weekend was a real break in our routine of late, and a bit of a return our pre-bike boater lifestyle. Well, kind of. We headed up to Richland Creek to remember the passing of our good friend Dave Wood by depositing his ashes and planting a big bed of flowers near the cabin that Dave shared with his brother Zach and close friend David Alexander. Dave wanted to be pushing up daisies and I'm sure he'll do a fine job.
As we headed up into the heart of the Ozarks, we were sure that each passing wave of thunderstorms would be the last, but that was far from being the case, as it stormed all night Friday. The creek was pretty high on Saturday morning, so we loaded boats on a 6-wheel ATV and headed a mile or two upstream for a little play time. 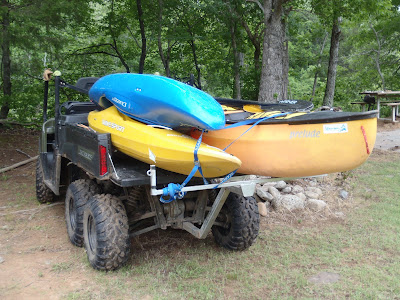 This makes for a cool shuttle vehicle, much better than carrying in the boats on foot! 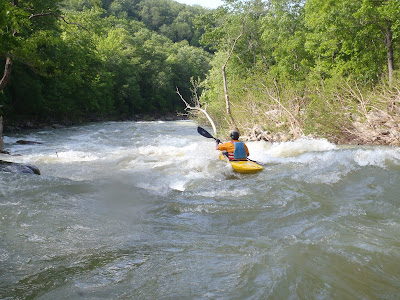 Our friends' cabin is on lower Richland Creek and is at the bottom of a very nice stretch of whitewater. David Alexander leading down a little drop. 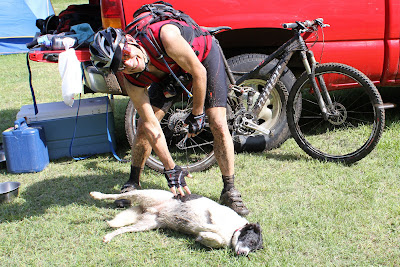 Willie shows off his dirty belly after a 6 mile run. He was much dirtier at the top of the climb, but a few creek crossings on the way down gave him a little belly rinse.
In between  morning and afternoon kayak runs, Willie and I headed up the three mile climb to the top of what is jokingly referred to as a road. It averages about 10% and is made up of big rocks, red clay, creek crossings, ruts, washouts and poison ivy. I did it last year and should have known better. I found it difficult and Willie and I both got dirty. I had to wash my kit twice and it's taken me a few passes to get the Niner clean. It took me nearly an hour to go three miles, but it takes about half an hour in a 4-wd truck, and I can come down much faster on the bike! 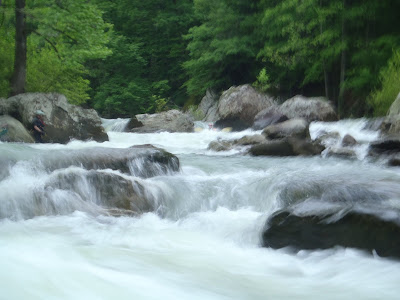 On Sunday, Diane facilitated another, longer creek run by driving shuttle for me on upper Richland. There were a lot of old friends on the river and, though I've spent more time on the bike than in a boat in recent years, I felt like I belonged there. It's one of the most beautiful places I know.
After a miserable ride experience a couple of weeks ago, I've been trying to prepare for an upcoming Colorado trip by doing some climbing on the bike, but I've been more concerned about spending some time in my boat. Up until the last couple of weeks, I have been unable to paddle since my crash, so it was good to get some quality river miles in.
Posted by JBar at 10:34 PM