The weather has been absolutely miserable for cycling. Normally, I'd just load up the kayaks (or build an ark) and head to the hills under these circumstances, but an still-gimpy shoulder has limited me to a few opportune sessions on the bike and a lot of whining about the rain and flooding. On Saturday morning, I joined my friend Karen for road ride out to the Barrett-Garrison Loop, my first open road ride since my crash, and got in a little climbing before the deluge-of-the-day started. After the ride, I stopped by Cook's Landing and walked to the BDB just to take a look at conditions. In a nutshell, it's a mess! The water has receded somewhat, but it is still very high and has left some amazing debris in its wake. 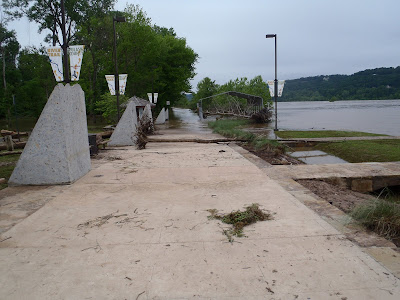 The flows on the Arkansas River have diminished enough to allow access to the NLR side of the BDB, but much of the trail remains submerged and littered with mud and large logs. 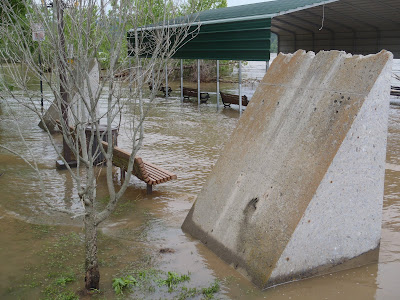 Seating was readily available. Take your shoes off and soak those tired feet! 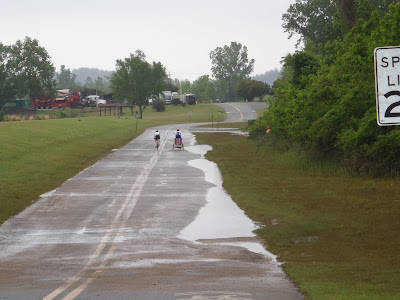 The gate to Cook's Landing was closed, but the road has emerged from the flood, leaving schools of small fish occupying the roadside puddles. Allison and John Martin, shown here with daughter Emerson safely cocooned in her enclosed trailer, got in a little spin as the showers returned, then headed home for a run.
Sunday was a total wash out for me. On Monday, I ran an errand at lunch that took me to Rebsamen Park Road, so I drove to the Little Rock side of the BDB to check things out and take a few photos. It was a quick stop due to the cold drizzle, but it revealed some of the impact that the high water had on river users. The big eddy in front of the lock contained a swirling mass of dock floats, boat docks, logs, gas tanks, soccer balls, basketballs, ice chests, and just about anything else that floats. 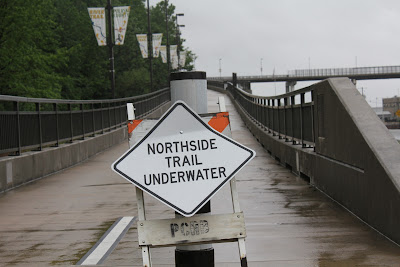 There is a lot of truth here! 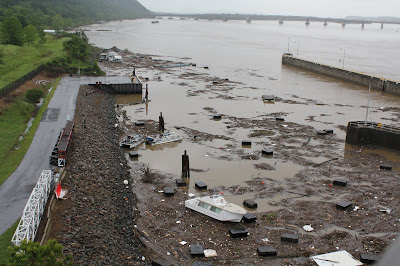 Many boats and boat docks, some with boats still in them, were tied off along the bank from Little Maumelle Creek to the dam. Others simply swirled in the eddy along with the huge mass of flotsam. 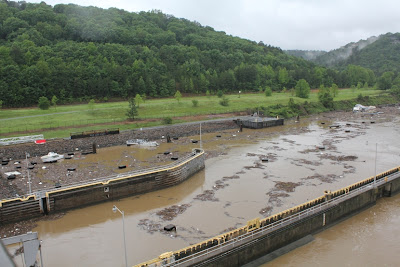 The folks at the marina on Little Maumelle Creek saw many of their boats and docks blown downstream by a flash flood a couple of years ago. That may have just served as a practice run for the mess they face this go 'round.
There's still a lot of water up in the hills that has to pass through Little Rock, so we'll be facing compromised trail conditions for awhile. Most of this rain fell in Arkansas as opposed to further upriver in Oklahoma as in the last few flood events, so perhaps the water will recede sooner rather than later. In the meantime, it is presently drizzly and 47degrees, so another night off of the bike will have to be OK. I might dress for it and go out in February, but not in May!
Posted by JBar at 7:17 PM

Any word on changes for this weekend's trail summit?

This from Bert Turner:

I’m in the process of writing the email and press release now. Essentially, we are going to cancel only the Burns Park activities for Trails Day. Other events are going on in other places around the state, but the forecasts for the Arkansas River levels at Burns Park make using the River Trail, Pfeifer Loop, some of the parking lots, Victory Lake, and other facilities questionable. The water is supposed to be off most of the River Trail late Friday/early Saturday, but that does not give the crews much time to clean up the mess—and if the forecasts are off by a couple of inches or a couple of hours, we could have a very bad situation on our hands. We hate having to cancel those activities, but the water levels and the soaked ground just aren’t conducive to safety and fun, and we may do more harm than good by misusing the trails. We decided to cancel all of the events in Burns Park instead of just some because it gets too confusing and we wouldn’t get to critical mass for the big celebration with only a sliver of the many trail users.

Thanks for the query.

The river should be cresting today and dropping off over the next week. http://water.weather.gov/ahps2/hydrograph.php?wfo=lzk&gage=lita4&view=1,1,1,1,1,1,1,1