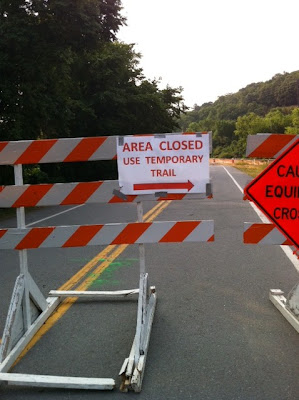 The west end of the Little Rock River Trail is temporarily detoured for construction at the Two Rivers Bridge.

The detour is gravel and is ridable, but caution is advised for road bike riders. It's a bit rough.

Bridges rumors
I had a chance to visit with NLR mayor Pat Hays at the Ride-To-Work event this morning and asked about projected opening dates for Two Rivers and the Clinton Park Bridge. He could not answer with complete certainty, but his rumors are probably fresher than mine!
Two Rivers Bridge will likely open in late June or early July. The Clinton Park Bridge will probably not open until October when President Clinton can be present for the festivities.
My previous report that construction would start in June on the Shillcut Bayou bridge (wooden bridge) replacement was apparently in error. I'll try to get an updated schedule on that project.
Posted by JBar at 2:43 PM

Glad to see your photo and update on the detour on the LR River Trail. I ran into that on Thursday. I wouldn't advise trying it if you have real skinny tires. It's rough as all get out and you worry about running over something that will give you a flat. If you are coming East to West and intend to turnaround and go back East you would be just as well off to do it when you hit the detour sign.