Jeff Caplinger , NLR Parks and Rec Projects Director, recently sent out a short update on the mountain bike projects underway at Burns Park, the centerpiece of which will ultimately be the Big Rock Bike Park.

Phase One is underway:


-          The new trail north of the Tennis Center has been flagged.  CATA will be clearing a corridor later this month and will schedule a work day in January* to try to finish it out so it can be open for riders in February.  Date to be announced by CATA.
-          The downhill portion of the green trail leading toward Arlene Laman Drive is complete.  The new section that will parallel Arlene Laman Drive has been flagged.

I was only superficially familiar with the woods north of the tennis center so I decided to walk the area and follow the flagging. The new trail will start at the Hospitality House and parallel the road for about 3/4 mile to a point near the softball fields to the west. 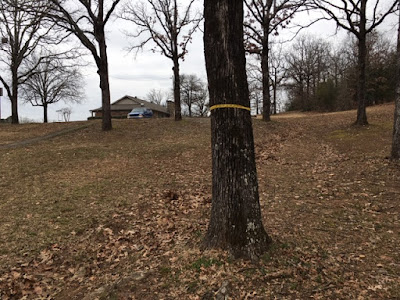 The trailhead at the Hospitality House 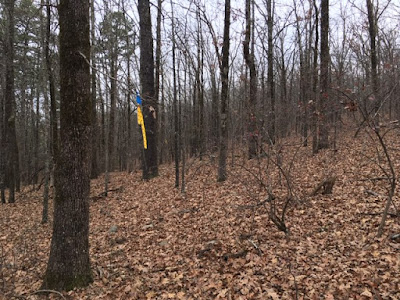 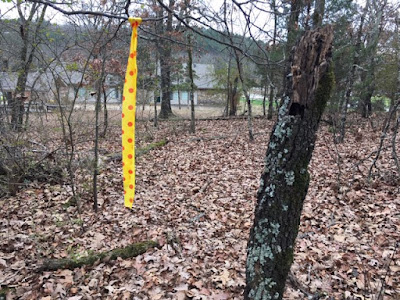 The hill visible in the background is the site of the Overlook Pavilion. There are also plans for trail development in that area. 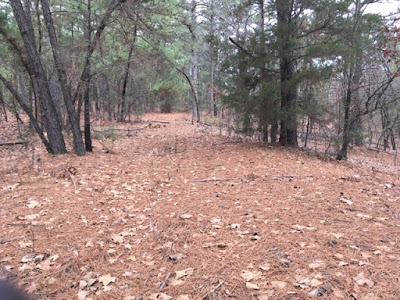 The new trail is on the shoulder of a ridge which is topped by a remarkably clear old road bed. There is also potential for more trails on the north side of the ridge, making for a nice little complex of a few miles, easily linked to many more nearby. 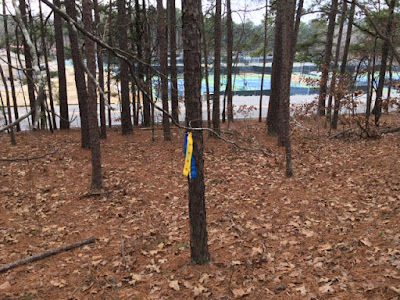 The road is visible from the trail for most of the way, at least in winter. 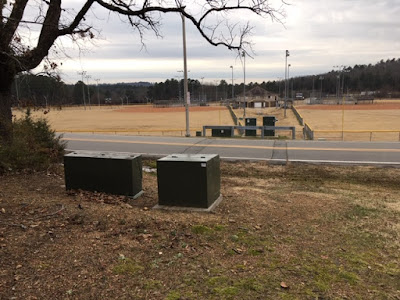 End of the line. It is just a short hop from here to the Boy Scout trailhead across the I-30 overpass and the existing red and green trails.

* The work day has been set for noon, January 20, meeting at the Burns Bark Hospitality House.

I did not go over to check out the work on the downhill section of the green trail but will do so soon.

Phase Two:
-          Architect has finished new renderings for pavilion and will have an estimated cost later this week.
-          Engineering cost estimate to come next week.

The pavilion mentioned would be the main building at the Big Rock complex. The first pass was had a modern look and I think it was thrown out there to elicit feedback from the committee. The consensus was that the buildings should be consistent with the rustic look of the existing Burns Park pavilions with a nod to the industrial vibe of the old quarry structures. It will be interesting to see how that has evolved.