Okay, I'll confess to adding the term "Regional" in the title of this article because that is the kind of vision I was hearing about at a meeting I attended last week at the North Little Rock Community Center.


A Visionary Plan
For several months now, North Little Rock Parks officials, along with local bike advocates from Central Arkansas Trail Alliance (CATA), and others, have been working on a far-reaching plan for a mountain  bike trails and skills complex on the north side of the river. At the heart of this broad plan is the development of a bike park at the Big Rock Quarry. The working name for the project is Big Rock Bike Park.

Some Recent History
Big Rock Quarry has seen a couple of other development plans rise and fade in the last few years. The first, and most ill-conceived, plan was the sale of the quarry for a real estate project consisting of a couple of apartment towers and a couple of hundred town homes. When this plan was exposed, initially here at JBarCycling, the public was outraged and  rapidly responded. That project was quashed by the waves of protest and bad publicity that followed. The property was eventually integrated into the parks system.

The Future
Initially, the existing mountain bike trails at Burns Park and the adjoining Emerald Park would be improved and extended. The work will make the riding experience on the existing trails better and will enhance the connections to Big Rock. 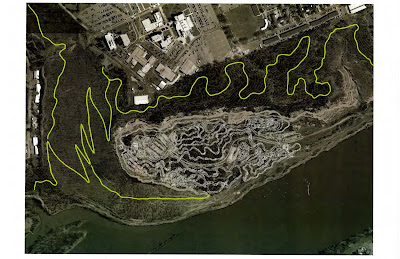 The yellow lines represent existing trails. The proposed Bike Park drawing is overlaid in the center. The switchbacks near the left side are on the old road bed that climbs to Emerald Park from the River Trail. Current talk is that it will be rebuilt to facilitate climbing to the top of the bluffs. Multiple downhill routes are planned to rejoin the trail near Paul Duke Drive.

Setting The Stage
The other older Burns Park "Boy Scout" trails (Red, Yellow, etc) will be improved or rebuilt as needed, and a large parcel of previously unused park land off of Overlook Dr. will see new trails and the restoration of the existing pavilions. 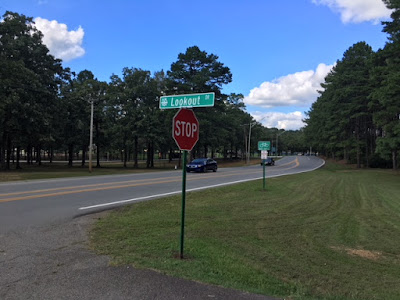 Lookout Dr. near the I-40 entrance to Burns Park has long  been gated due to "inappropriate activity" at the isolated pavilions at the top of the hill. 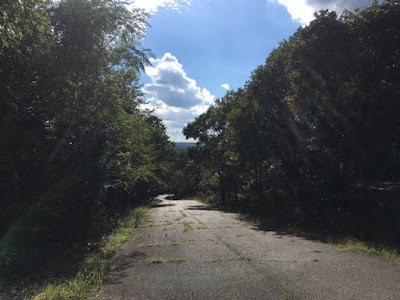 Overlook Drive- There is plenty of elevation on this large island of park land. 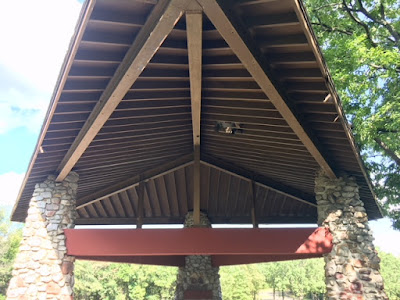 The roof is in disrepair but the rock, steel, and concrete bones of the Overlook Pavilion are stout. 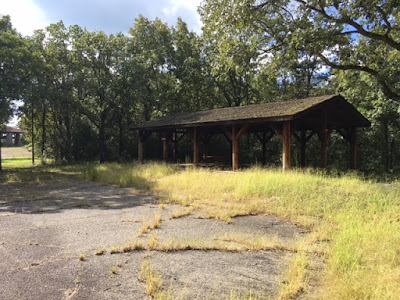 The Overlook was a favorite spot in Burns Park for many folks, but, over the years, vandalism and misbehavior led it to be closed. Trees will need to be cut to restore the vista, and there is plenty of other work to be done, but this will be a valuable "re-addition" to the park.

At the heart of  all of this will be the Big Rock Bike Park. I was blown away by the scope of this plan. Though the designer with whom I spoke at Progressive Trail Design described this as a very preliminary "cartoon drawing", you can get an idea of the direction of this development. Get ready for some mountain bike action!

This Is For Real
Obviously, an endeavor of this scope will take time and money, but what I saw at the recent meeting told me that this is not a pipe dream. I have questioned the commitment of the current NLR city government to cycling infrastructure, as neither Mayor Joe Smith nor Parks Director Terry Hartwick have many ties to cycling. The mayor was NLR's director of development and Terry comes from the Chamber of Commerce. Ultimately, those leaders understand that the strength of this project will be its contribution, not only to quality of life for us locals, but to the economic growth that will follow. Visits to Northwest Arkansas provided a close look at the kind of dollars that follow the introduction of first-rate outdoor lifestyle amenities.
The Railyard at Rogers serves as a bit of a model, but the quarry offers several times the area of that park.

The Mayor is all in, saying, "We don't want to do this on the cheap. We want a Taj Mahal." That's the right way to do it, Mayor.

The vision is long range, and will require several phases and budget cycles. With eyes wide open, the group is already discussing financial and operational plans for maintenance and sustainability of the trails system and supporting facilities. The Parks Department included money in this year's budget for preliminary engineering, and I was very impressed at how far along the project concept has come.
North Little Rock's commitment, along with CATA, of land and labor to the overall plan represents substantial local investment as the City seeks grants from entities such as the Walton Family Foundation and the Arkansas Department of Transportation (ARDOT) recreation trails program (RTP).

It looks like I've resurrected JBarCycling just in time to follow the next very big step in making Central Arkansas a major cycling destination. Watch your mail box for notices of programs at CATA meetings and elsewhere.

It's hard to even define the scope of all of this in one article, so I think I'll be writing about Rig Rock for several years to come. I'm excited.

This looks like an awesome plan! Has anyone included discussion of a possible outdoor velodrome as part this development? As far as I know there are none in AR, and the closest one is 5+ hours away at the very least. An outdoor veledrome would be a great addition to the state and this masterful plan!

Funny you should ask...
I discussed the possibility with Jeff Caplinger of NLR Parks, and we went so far as to do a brief search of dimensions. My spiel was that there are no tracks in the region, making it a draw from a large area, and that an outdoor concrete track would be relatively low maintenance.
After attending the committee meeting and getting a better view of the scope and intent of the current plans, I think a velodrome would be a difficult fit. That said, Jeff seemed to find it interesting and even mentioned another location that might be suited for one.

CATA is a big driver and has a proven record of trail building and volunteer recruitment, important aspects of the viability of the proposal. I think it would take similar activism to bring a track into active discussion.

Try to incorporate the planting of fruits & berries along the trail wherever possible. I recently participated in the bicycle/pedestrian survey as a volunteer and one of the regular riders mentioned his favorite secret muscadine patch along the river trail in Burns Park and would like to see more of the same.