There are many trail projects at some stage of development in the State of Arkansas, but perhaps none have more potential than the proposed Southwest Trail. The trail will connect the Little Rock Central High School Historic Site with Hot Springs National Park, and will appeal to hikers, cyclists, birders, and just about anyone who enjoys the outdoors. The preliminary engineering and environmental study began in April of 2018 and should be complete by fall of 2019. It was funded by the three counties involved and by a federal transportation grant . The contract for the study was awarded to Garver, the North Little Rock based regional engineering firm.

Last week, public information meetings were held in each of the three counties through which the Southwest Trail will pass, Garland, Saline, and Pulaski. The purpose of the meetings was to inform the public of the proposed route, along with alternatives, and to seek comments and concerns from those along the routes. The meetings were each held from 4:00 to 7:00PM and were of an open house style. There was a 5-minute PowerPoint presentation that gave a broad overview of project, and large scale photographic maps were laid out on a number of tables. In addition, several members of the Garver team were on hand and available to address specific questions using laptop computers with detailed maps and more detailed information. 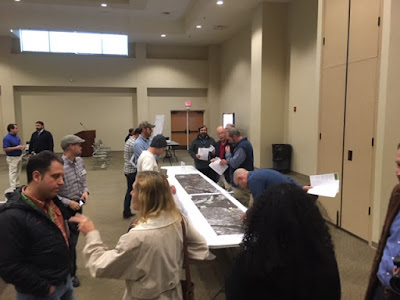 Dan Lysk getting a word from Lynn Bell of Metroplan. Jon Hetzel of Garver looks on as participants check out the proposed routes.

I attended the Pulaski County meeting, which was the last of the three. I took the opportunity to speak with Jon Hetzel, communications manager for Garver, and to ask him about the feedback he had received thus far in the process. Jon stated that most of the attendees at the Garland and Pulaski County meetings were potential trail users, while the Saline County event drew a larger number of land owners concerned about the potential impact of the trail on their property. I had heard that there was some significant pushback at that meeting but Jon didn't see it that way. "People got a mailed notice of a meeting about a trail right-of-way that might cross their land so they were understandably concerned."
The intent of the routing is to minimize negative impact on the environment and on private landowners so it will largely follow existing right-of-ways. Hetzel said most seemed satisfied when they saw the plans. Of course, there will be more direct discussions as the plans become more firm, and, as with any large scale project, funding for engineering, land acquisition, and construction will be key. This is a years long project that will have multiple phases but it got a good start when the three counties approved the initial funding for the environmental plan. 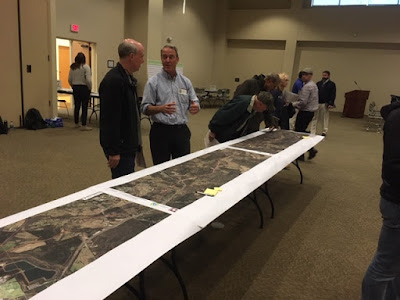 A Garver representative discusses the plans with the aid of large scale, detailed maps. 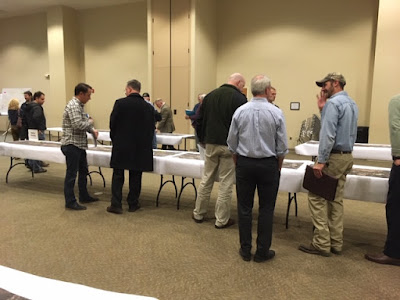 I showed up as the meeting opened at 4 o'clock and there were already a number of interested people on hand. 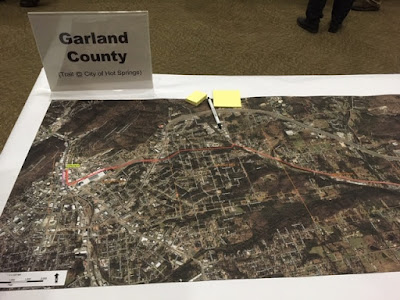 The maps of were laid out in a linear manner and divided by county, making it easy to locate specific points. 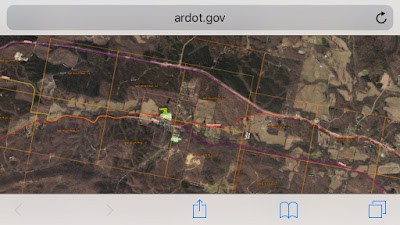 The Southwest Trail will build on out state's already impressive portfolio of cycling and trail resources. One needs only to look north to the Katy Trail in Missouri to see how a point-to-point route for cyclists and hikers can become a regional magnet for tourists. Local economies all along such route benefit as BNB's, hotels, restaurants, gas stations and other retailers grow their businesses on the influx of new visitors. The proximity to the Arkansas River Trail, the new Northwoods Mountain Bike Trail, the Iron Mountain Bike Trails at Arkadelphia, and the proposed Big Rock Bike Park in North Little Rock would make central Arkansas a destination for cyclists of many disciplines.

This kind of growth is good for our economy, good for our image, and good for the health of the citizens of a state where 35.9% of adults are obese. For our youth to have a chance to break this cycle, we need to continue to provide more opportunities for healthy activities. My personal experience is that better nutrition follows regular exercise. Put that fast food burger down and give peas a chance.
IF YOU ENJOYED THIS POST, SHARE IT WITH YOUR FRIENDS.
I don't sell anything or don't have a clue on how to collect data.