OK, as many of you know, I'm pretty marginal as a user of social media, so it won't come as much of a surprise that I don't pay as much attention as I could to my own JBarCycling Facebook page. I post links to my articles and have welcomed local shops and clubs to post there as well. This morning, I noticed that Spokes was holding a New Rider Orientation Clinic hosted by Eric Easterly and Leah Thorvilson, so I decided to drop by. 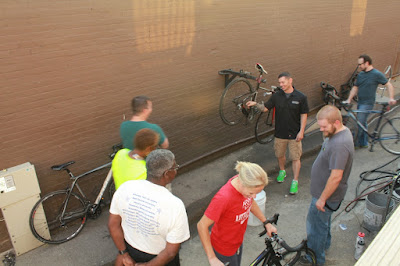 This class covered bike cleaning and lubrication.
I had not seen the previous announcements, but I found out that this was the third class in the series that Eric and Leah had held. The sessions are held more or less monthly and previous topics included fixing flats, proper shifting, and making minor mechanical adjustments. 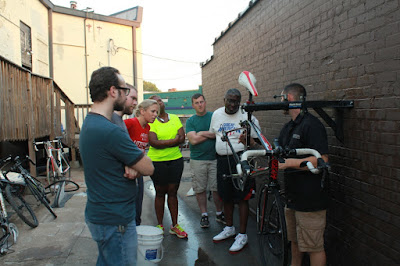 Eric was thorough and patient in explaining each step of cleaning the bike, adding in bits about the function and features of various components as he went. 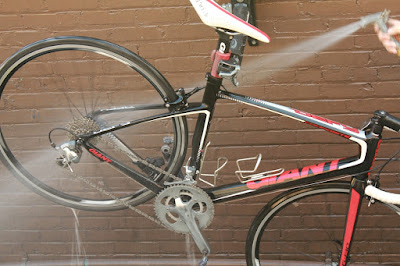 I keep my bike pretty clean, but Eric put me to shame with the clean he put on this rig.
This apparently was their smallest class to date, with six students, and most of the riders had attended all three sessions. Eric mentioned that he would do a class on wheel truing, and I'll be first in line for that. I do most of my own work, but have shied away from messing with my wheels. That said, my wheels road have seldom needed to be touched and disk brakes allow me to ignore the minor wobble of my mountain bike wheels.
Most of us start out knowing very little about modern bikes, and we are often hesitant to reveal our ignorance to our presumably more learned friends. I have a near insatiable curiosity about anything that I use, so my first few years on the bike were spent reading, pestering friends, and annoying the shop guys. Simple things like using barrel adjusters to fine tune my shifting totally eluded me until took one off and disassembled it.  Of course, then I had to replace the cable and adjust my derailleur. Using barrel adjusters is very straighforward, but it took me two years to figure out which way to turn it. I blame the shop wrench who gave me the old "lefty loosy-righty tighty" line. He knew what he meant but confused me completely. (Lefty-tighty is more like it to my perception. A counterclockwise turn of the adjuster tightens the cable. )
You can always learn something if you start off ignorant enough....
I will confess that I am not above the arrogance of thinking I know more than I do. My first demo ride on a bike with STI shifters (if you don't know what that is, you're likely riding them. ) was on a Cannondale from Competitive Cyclist, then Bikeseller. I knew that the shifters were the little levers at the brakes and promptly shifted to the small front ring and the smallest rear cog. Hmmm, now what? I called Craig Zediker just before closing time at the shop, who explained between snorts and chuckles that the brake lever was also used to shift gears. Eureka! What will they think of next!?
So, if you're new to riding, accept that you need to learn a few things, many of which you have no idea that you need to learn. Look for opportunities such as what Spokes is offering, pester your friends, ask the guys in the shop where you bought your bike or have it serviced, or even stop somebody on the River Trail if you have an immediate need. Most people who have a bit of knowledge are glad to share. Helping others is a rewarding and empowering thing, so let folks help you. You're doing them a favor.
Follow local bike shops and clubs on social media or get on their e-mail list.
Other shops in town also offer events to welcome new cyclists and help them learn some skills or just meet like-minded riders. In fact, Chainwheel is hosting a Ladies Night on October 8. This looks like less of a technical event than an opportunity to meet other riders and learn about group rides and clubs around the area. Take advantage. Heck, we can all use some new friends.
﻿
Posted by JBar at 9:31 PM