Time flies when you're having fun, and I guess that I've been having a blast over the nine years that have passed since the Big Dam Bridge opened. The bridge opening was on Saturday, September 30, 2006 and the inaugural BDB100 took place the next day on Sunday, October 1. 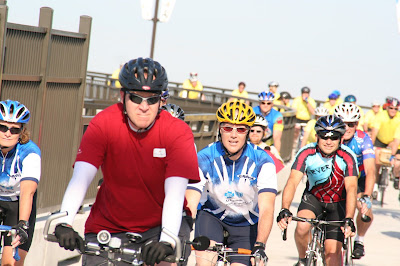 This was the first "official" ride over the new Big Dam Bridge in 2006.

Diane and I were invited to be among the Garver folks to join the VIP crowd at the ribbon cutting and the first ride across the new bridge. Having watched the construction on a near-daily basis, it was an thrilling moment to actually ride across the BDB with its sweeping views and dizzying height, while pondering the possibilities of the many routes that it opened for cyclists. 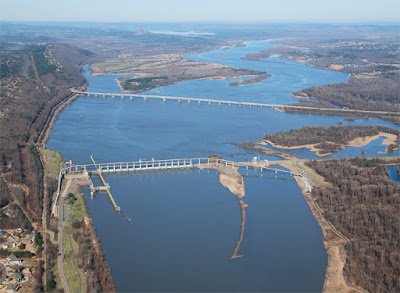 I don't think the BDB was yet open when this photo was taken by a Garver photographer, and the Two Rivers Park Bridge was not yet even a twinkle in Judge Buddy Villines' eye. 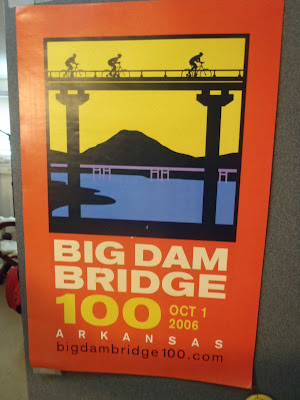 
With no Two Rivers Bridge to safely funnel riders to the roads west of the city, it made sense to keep most of the 2006 route north of the river. There was enthusiastic buy-in on the parts of Maumelle, Mayflower, Conway, and other communities along the route, so one of the biggest challenges to organizers was how to incorporate the Big Dam Bridge itself into the route.
The solution was to start and finish near the Burns Park soccer fields, where around 1000 enthusiastic riders lined up for a mass start and then immediately took a hard right turn onto the River Trail in order to head the the BDB. It was a thrill to cross the bridge en masse and then head back toward downtown Little Rock on closed roads. After crossing back to downtown North Little Rock, we headed up the trail toward Maumelle Blvd., to Mayflower and beyond for a circuit around Lake Conway. Along the way out, the ride crossed the old tooth-rattling wooden bridge near Burns Park. There had been a lot of conversation among riders as to how that would go, but it went well as local riders were aware of the danger, and by then the ride had spread out quite a bit.
The 2006 BDB course would likely be considered far too sketchy for this year's bigger crowd, though the 2015 NLR start is somewhat reminiscent to part of the original. Staggered start times and trail improvements should serve to help spread the peloton out early on. 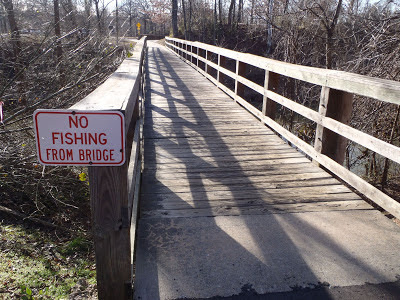 The thought of 1000 riders crossing the old wooden bridge over Shillcut Bayou was a concern for many of us in 2006. The 2015 route will benefit from a wider, smoother bridge surface and a better approach.

Growing Community-Growing Event
Like the BDB100, our cycling community has grown and matured over the years. The course changed  most dramatically when the opening of the Two Rivers Bridge made possible a grand loop crossing the Arkansas River at Toad Suck and added a notable climb in the form of Wye Mountain. Traffic control on Maumelle Blvd. had always been a problem, particularly in the afternoon of the ride, as stragglers came in for hours. Now the course been has moved yet again to the more rural south side of the river valley, making for a less disruptive, safer, and more scenic ride. The ride has grown to around 3000 cyclists, and the activities surrounding the event have evolved in quality and increased in number.
When the BDB100 was introduced, there was an idea to model it after the hugely successful Hotter'nHell100 in Wichita Falls, TX, which was already drawing over 12,000 riders. We haven't achieved that magnitude, nor is Central Arkansas situated in the wide open terrain of the Texas-Oklahoma border region, and thank goodness for that! While HnH is undeniably successful, the event also has the reputation of limited facilities and price-gouging hotels the go along with having a big event in a small city.

My 2006 bike log shows that my 100.11 mile ride took 5 hours and 17 minutes. The finish "festivities" consisted mainly of food and Gatorade returned from the rest and perhaps a beer vendor. The organizers ran out of finishers pins long before the last riders came in. As I recall, I snagged a beer from somebody, and may have gotten a burger or a hot dog as I waited for Diane to come in from her first century. We had no expectations, so that was a fine afternoon. Compare that to this year's Expo and post ride party.
I've only missed one year of the BDB100, but I had a good excuse. In 2009, Diane and I were spending 18 days kayaking the Grand Canyon. I'll give up a ride for that experience every time. 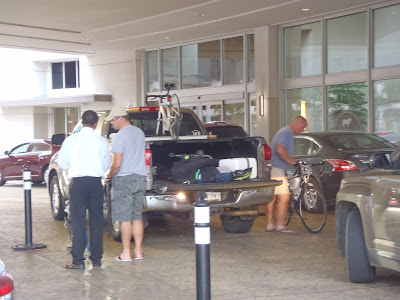 On Saturday, a revived Main Street Argenta will be the scene of live music, including a Big Dam Blues Party that stretches until midnight, multiple local craft beers, and many food opportunities as thousands of cyclists, spectators, and locals in search of a party crowd the street. With the guidance of the Big Dam Bridge Foundation and the good organization that continues under the hand of Fred Phillips' DLT Events Management, the Big Dam Bridge100 has enjoyed steady growth and and  has developed a solid reputation as a quality event that attracts cyclists from around our region.

When we all ride out on Saturday morning, keep in mind how cycling has helped change the shape of our community for the better, and we are all a very dynamic part of it.

Interesting post. It's so great to see how the BDB has benefitted riding enthusiast and the community of businesses that the riders support. We are blessed to live in such a beautiful state. I always meet new interesting people each year of the ride and so much of the BDB experience is about the connections we make that often blossom into friendships.