Along The Trail-More NLR Detour Improvements, The Usual Crowds, And Some Observations

The City of North Little Rock responded quickly and very well to feedback on the Broadway Bridge area trail detour.

Before
Before the recent changes, riders exiting Riverfront Park and turning left (west) were tempted to ride behind the orange barrels in the eastbound lanes. The barrels were meant to keep eastbound cyclists and drivers out of the construction area. 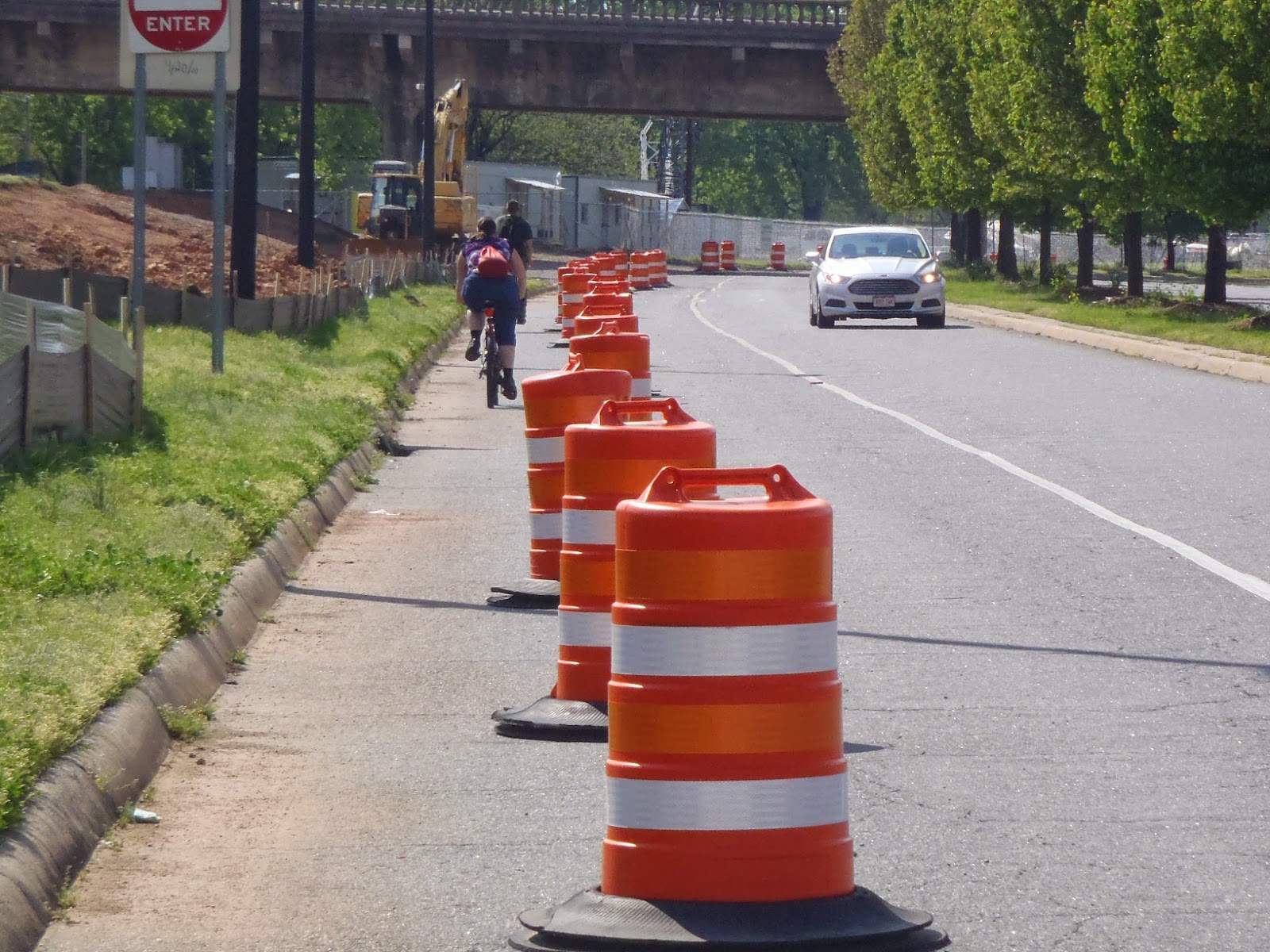 As seen looking west from the Riverfront Park gate, the traffic barriers seemed to provide a protected path, but were intended to keep traffic out of the prohibited construction area. 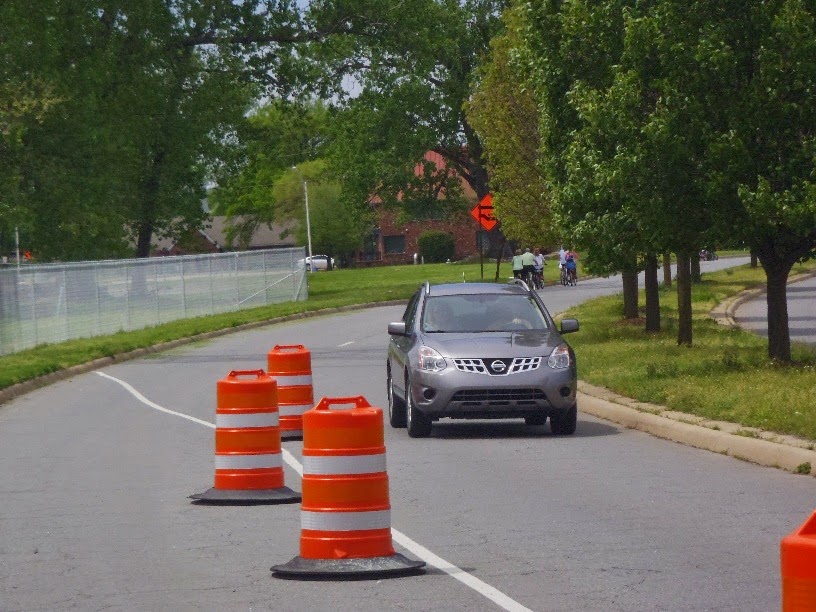 Cyclists who chose that option, like this large family group on rental bikes, found themselves dumped head-on into two lanes of 40-MPH traffic. The speed limit has been reduced to 30, but it is seldom heeded. Eastbound riders were either funneled into the construction zone or forced into the single traffic lane.

Riders following the detour on to Riverfront Drive now are given clear direction. 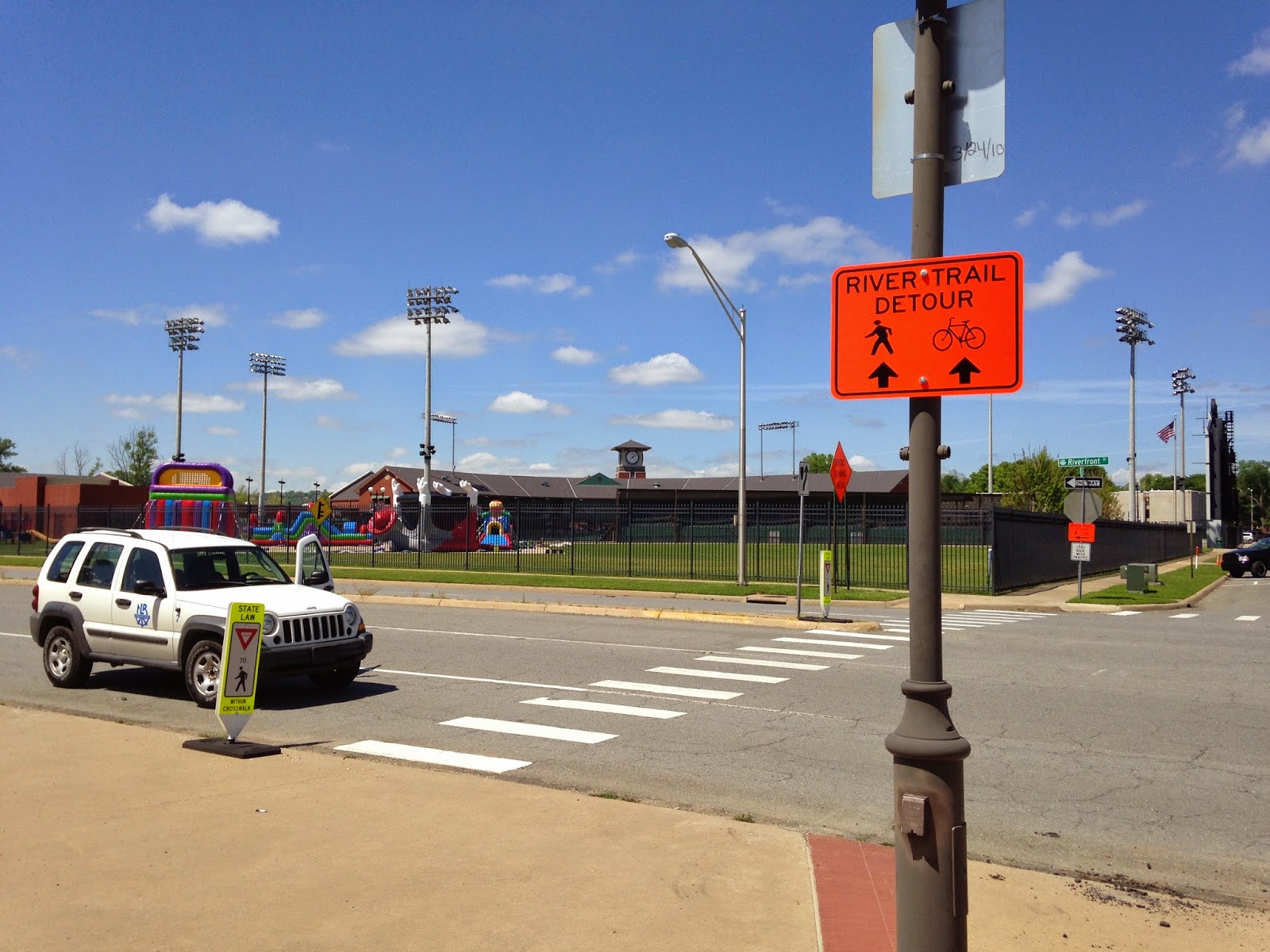 Signs clearly indicate that both pedestrians and cyclists should cross to the westbound lane or to the sidewalk.

Eastbound riders now have a marked bike lane, and the correct placement of the barriers should help keep cyclists from entering the construction zone.
The "after" photos are compliments of Chris Wilbourn, NLR Planning/Traffic Engineer (Director).

I had sent Chris some photos and feedback last week and when I called to follow up, he was already on the site making changes. Thanks also go out to Danny Dillon, NLR Chief of Staff Danny Bradley, and Alderman Charlie Hight. All of them, along with Massman Construction and the AHTD, have worked to help keep the River Trail open and safe for cyclists and pedestrians during the bridge construction.
I have also been working with Jeremy Lewno of Bobby's Bike Hike, as many of the "confused" riders were on rentals. Jeremy and his crew have scouted the area and are making it a point to inform their customers about the detour. Jeremy is also the Little Rock Bike-Ped coordinator, so he is busy with the many issues on the south side of the river.
The improvements are the result of a city being responsive to feedback from the community and responsible in maintaining the viability of the River Trail. The trail is a big draw for the entire area and an important part of the character of our city.

The Usual Crowds and Complaints

Spring has been kind of punk in central Arkansas this year, continually being thumped back by a stubborn winter, but the few really nice days have seen big crowds on the Big Dam Bridge and the Two Rivers Bridge and Park. Most of us know the drill by now. On the nice days, folks who seldom venture out join the trail regulars and make up a discombobulated, multi-directional moving (or not)  cluster that can try the patience of all of the players.

With some close observation, you can usually start to identify sub-sets within the crowd:

Regular Trail Users: These may be riders, runners, or walkers. Some are people you know by sight if you spend much time on the Arkansas River Trail. The frequent riders will usually ride solo or in a small group, riding single file in crowded areas, calling out politely to let others know they are passing. When you see them involved in a group ride, there's usually good order and "the rules" number 2, 3, and 43  are in effect. They save their speed work for the open road or empty trail sections, which are easily found.
Runners and walkers stay to the right side of the trail or bridge and know to glance over their shoulder before making a sudden stop or change in direction. If ear buds are in use, music is low enough to hear a greeting or warning. They keep an eye on their children and a short leash on their dogs. These practices are a matter of both good manners and self-preservation, along with a dose of respect for other trail users. 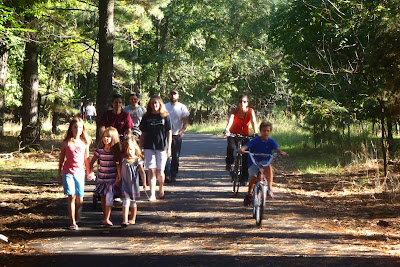 Weekend warriors: The riders in this set may actually ride frequently and have enough miles on their legs to believe that they are pretty fast. Unfortunately, many also believe that their average speed, Strava KOMs, and very sexy aerobars are more important than the safety and good manners mentioned above. "On your left" is shouted as an imperative and what should be a polite alert comes to simply piss people off. Ear buds, the bane of multi-use trails, are often present. Attire may range from gym shorts to full kit. The full kit guys in this subset don't usually really ride the team represented or they would have enough experience to have graduated from this group.
Runners in this set are often in pairs or small groups. All will likely have ear buds in and can somehow manage to take the entire width of the trail so that they can run abreast while not talking to one another (See "ear buds"). Passing riders often have to shout loudly in order to get their attention. In extreme cases, a shoulder tap may be used. Walkers in this group may follow the same patterns, or they may easily drift into the next classification.

The Blissfully Oblivious: Unfortunately, many very nice people fall into this category. They love getting out on the trail from time to time, often with family or friends. They have absolutely no clue that anybody else is doing anything with any purpose or direction. They'll stop in mid-trail and mid-stride to chat or look at deer/dog/bird/flower/sky/river without a thought. They'll walk 4 or 5 wide with kids, dogs, or strollers blocking the width of the trail. They don't think anything of leaving their kids' bikes laying on the trail and they may find the foot of a bridge a great place to congregate. In many cases, both their children and their dogs should be on shorter leashes. These are the people who actually create the most potential for conflict and danger on the trail, but they would never guess it. They can try the patience of most folks and may enrage type-A personalities. Some of these people come across as inconsiderate a-holes but, for the most part, they are just oblivious.

The RTUs are often grouped in with the WWs by the BOs, as the differences are subtle to the untrained eye. There are inconsiderate a-holes within each group, but the vast majority of people on the trail are polite, considerate, and follow the simple protocols of the trail.They are happy to be outside doing something that they enjoy, and they don't mind sharing.


For me, "typing" people along the trail is a form of entertainment, and if you ride the trail much, you'll encounter everything from swimsuit models to Chick-Fil-A cows.  People come and go, but over time you start recognizing "the regulars", then you exchange a nod or a greeting and start forming a bit of a bond. The trail is the only place I see some of the folks that I consider to be friends. I've known them for years and may not have their phone number or even know their last name, but we share something important.
Go out and ride with your friends. And look out for the BOs. They don't know any better, so just say, "bless their hearts" and know that most of them will be back home on the couch once it gets really hot, and you'll be back among the RTUs.

Good article John,
it's hard to resist the temptation to ignore an imperious," On your left" screamed at you by a Garmin rider in full kit ( you're here in Little Rock ?)or slow down or reply in french............