Updates: BDB Policy, Detours North and South of The River

On the BDB...
In statements to media, Pulaski County Judge Barry Hyde seems to have softened his positions on nighttime closure and the banning of dogs from the BDB to say that such actions are "under consideration". I think we can all appreciate his frustration with irresponsible pet owners and those who would use the BDB as an after-dark party spot, leaving behind litter and damage. I have confidence that Judge Hyde will act fairly and appropriately.

North
North Little  Rock elected officials and staff continue to evaluate and tweak the River Trail detour required by construction of the new Broadway Bridge. I met alderman Charlie Hight, chief of staff Danny Bradley, traffic director Chris Wilbourn, and Danny Dillon recently at the site to observe traffic and take an on-the-ground look at the current situation along Riverfront Road. The City had already responded to input from the cycling community by adding signage cautioning drivers of the presence of pedestrians and cyclists, and by reducing the speed limit to 30 MPH. 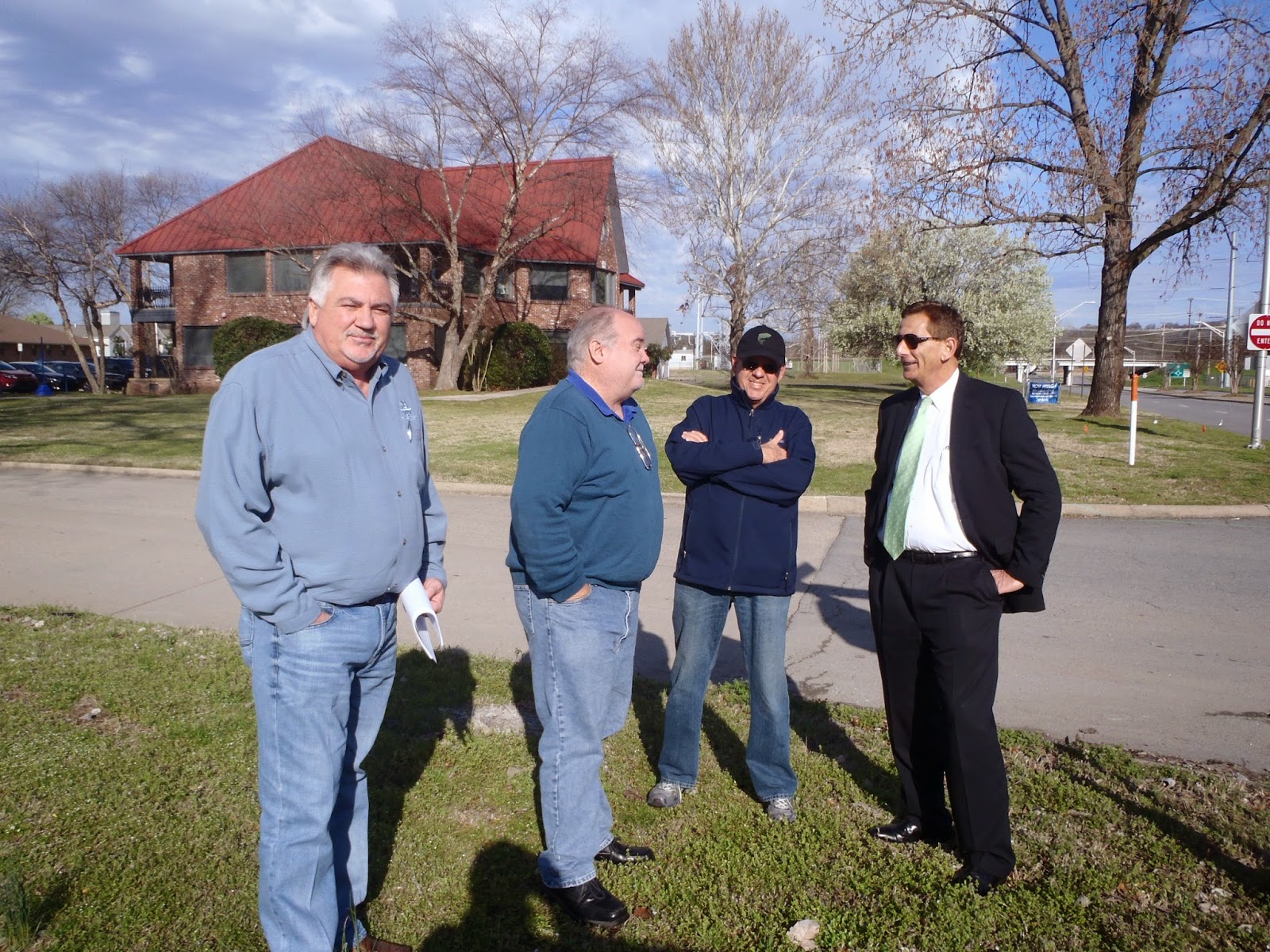 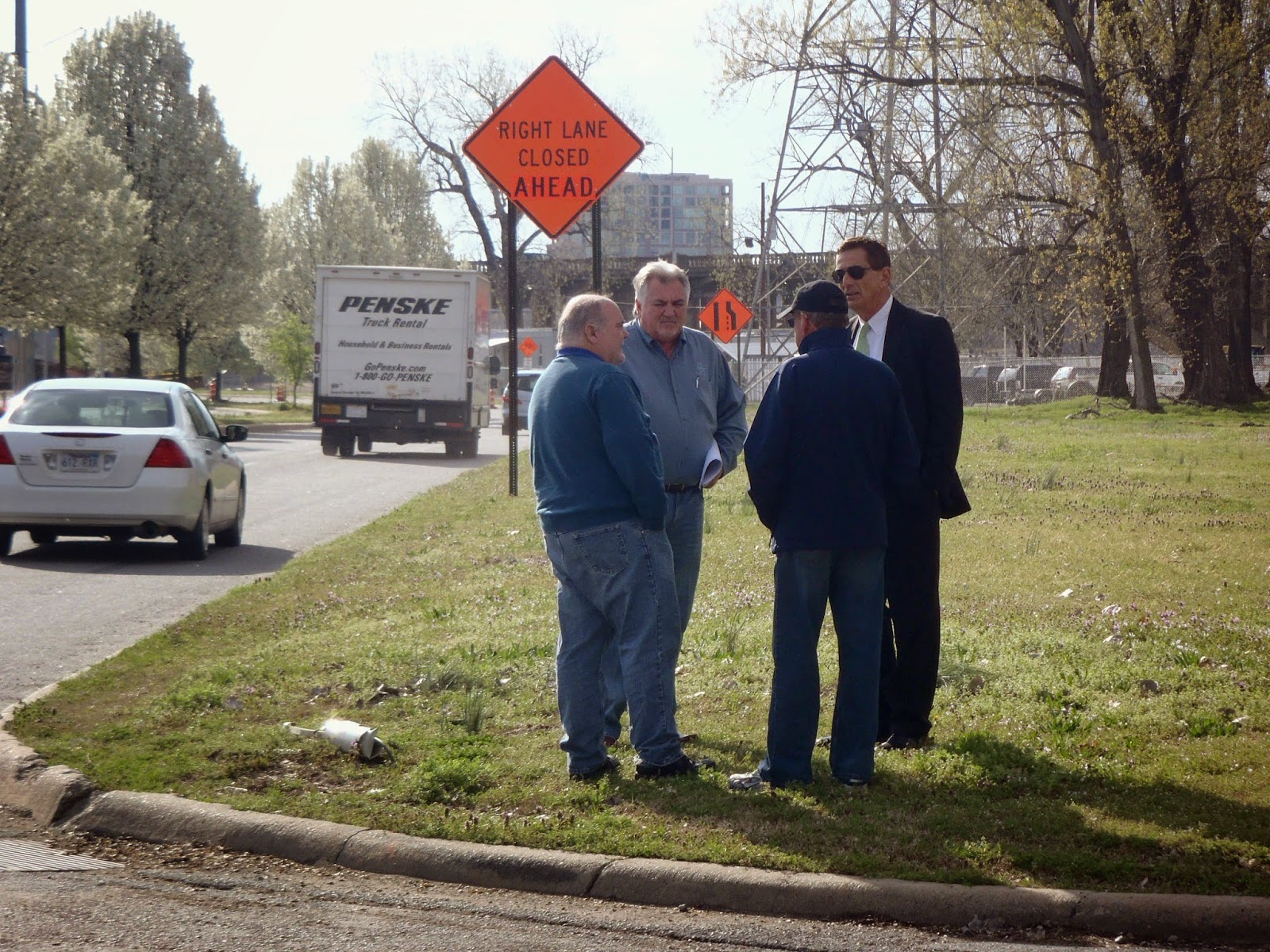 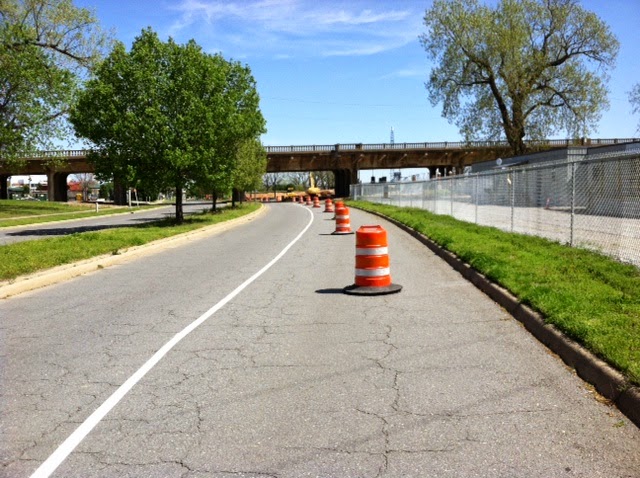 Striping was added to provide a bit of a buffer between the traffic lane and cyclists traveling east on Riverfront.

A radar speed indication sign has been placed west of Smarthouse Way to alert motorists, and there was discussion of making the intersection of Riverfront and Karrot/ Smarhouse Way a 4-way stop in an effort to slow traffic. My understanding is that the AHTD (this is a state highway) has approved that measure should it be deemed necessary.
The situation here will be dynamic as construction progresses, so be alert for changes to this route. There is no doubt that both trail users and drivers will be inconvenienced, so we'll all need to be patient.

Most of the pipeline construction along Cantrell Road near Episcopal Collegiate School is complete, though I did notice equipment still on site last week.The sidewalks on both sides of Cantrell have been improved slightly. 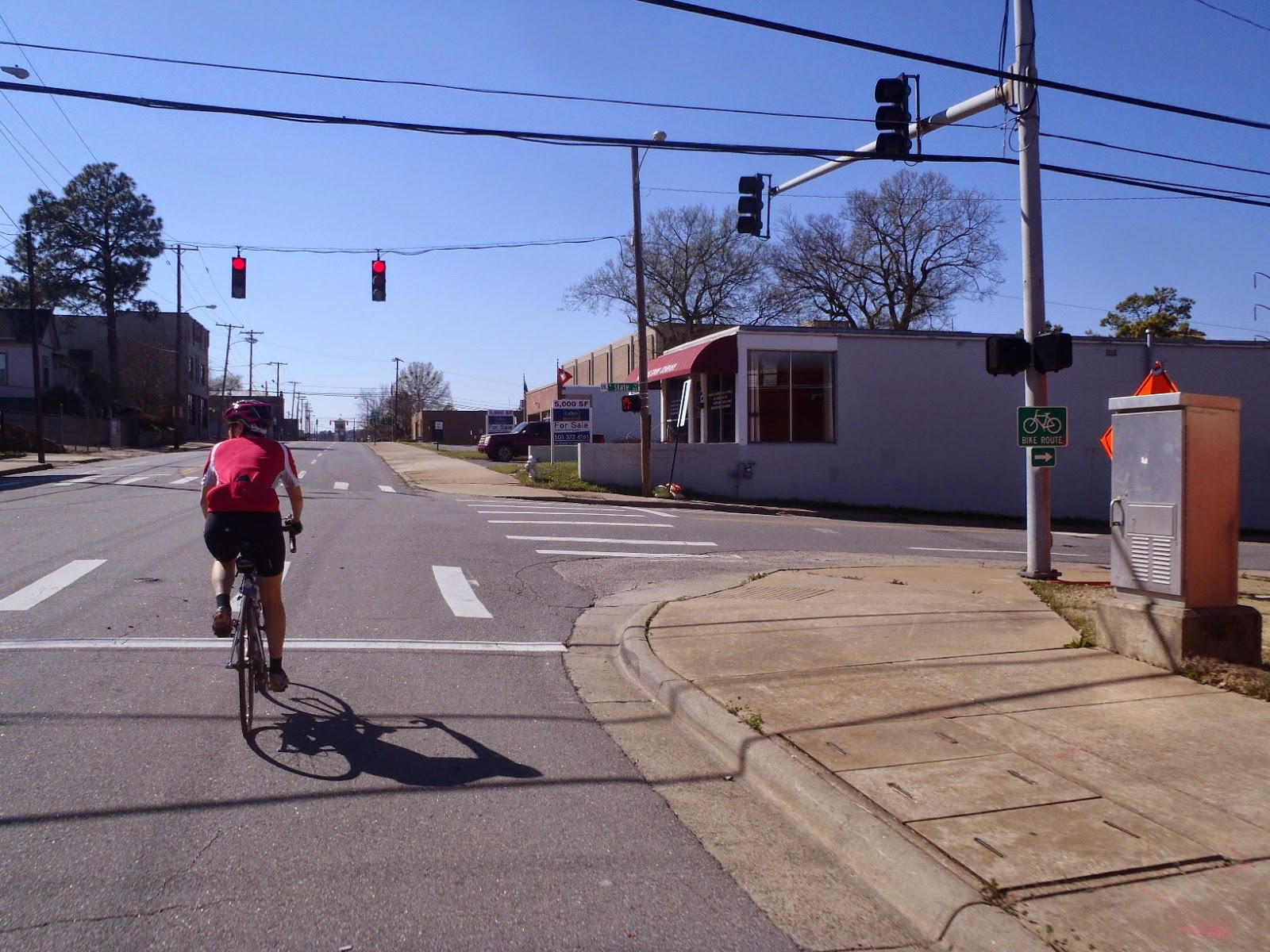 River Trail signage on Markham from downtown now directs westbound cyclists to cross to the north side of LaHarpe at State Street. After crossing LaHarpe, the trail continues west on North Street. 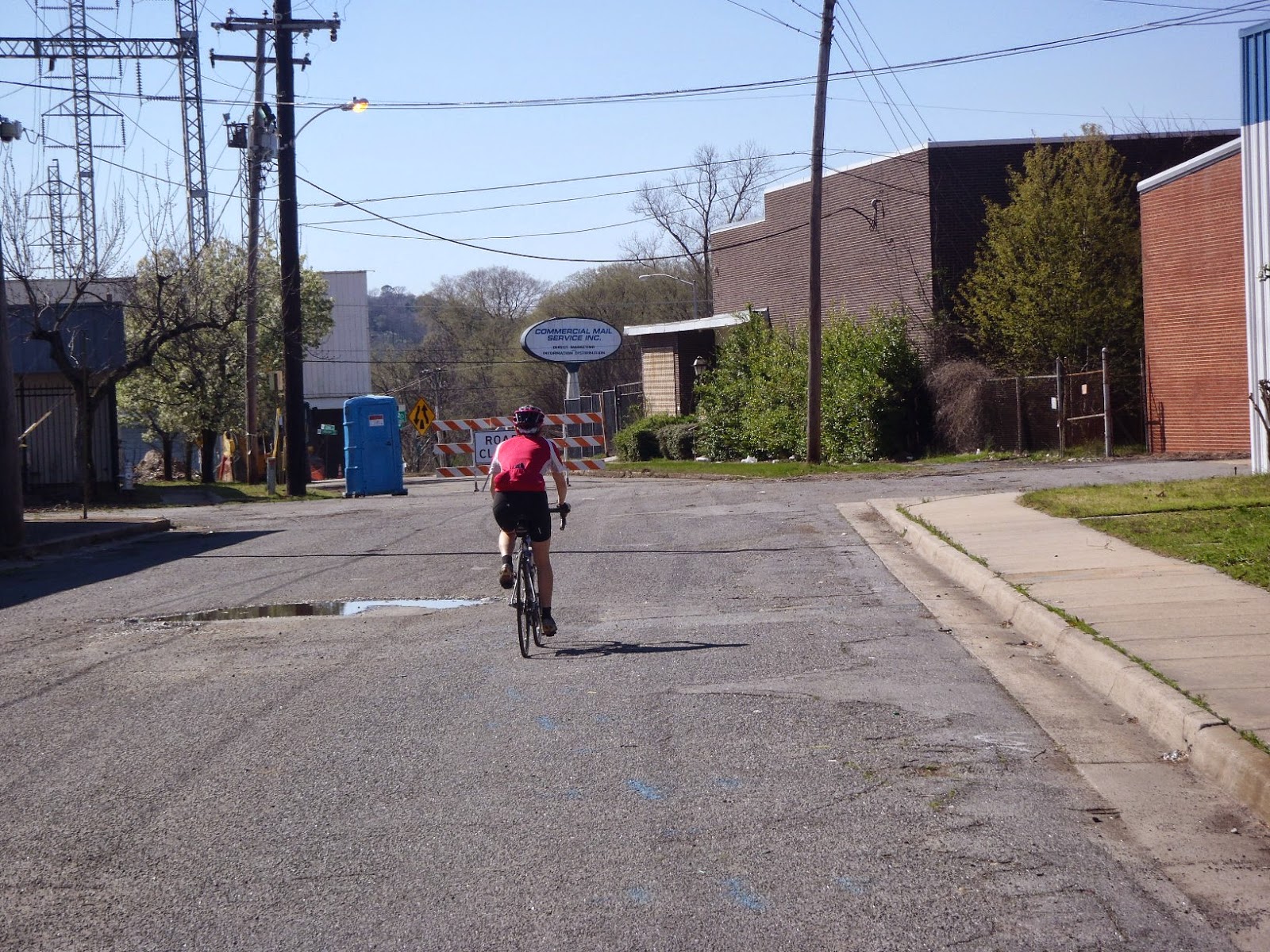 It appears that Mayor Mark Stodola has given up on the idea of a grand River Bluffs trail section running along the Arkansas River behind Dillard's Corporate headquarters. Dillard's has apparently consistently refused  to allow the project, and there is little or no interest in or support for it among members of the Little Rock Board of Directors. Stodola is said to be trying to gather support for the idea of designating the sidewalk along the north side on Cantrell as the route of the River Trail. 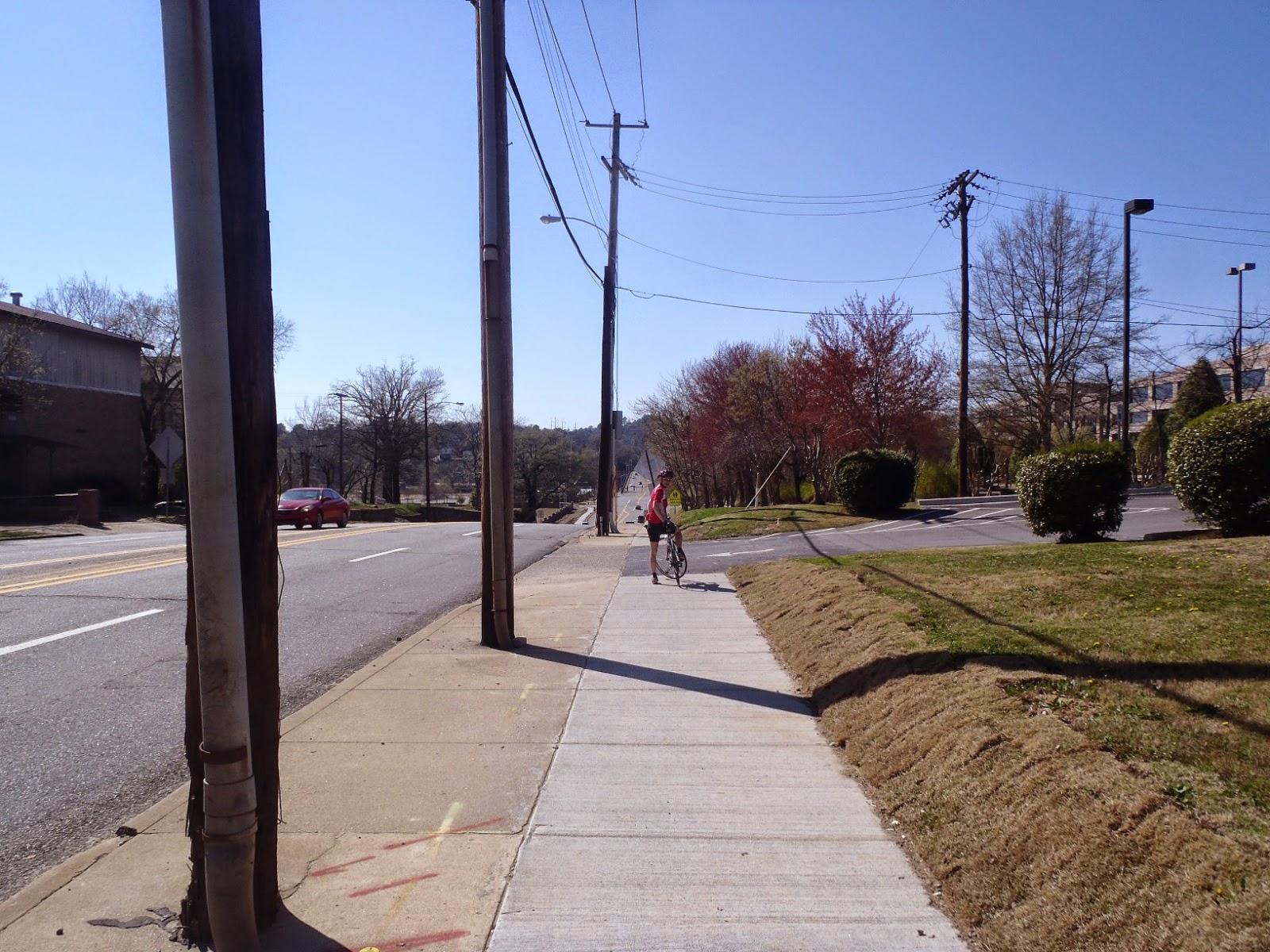 The sidewalk near the Packet House has been widened to allow riders to bypass utility poles that had been centered on the walk,. 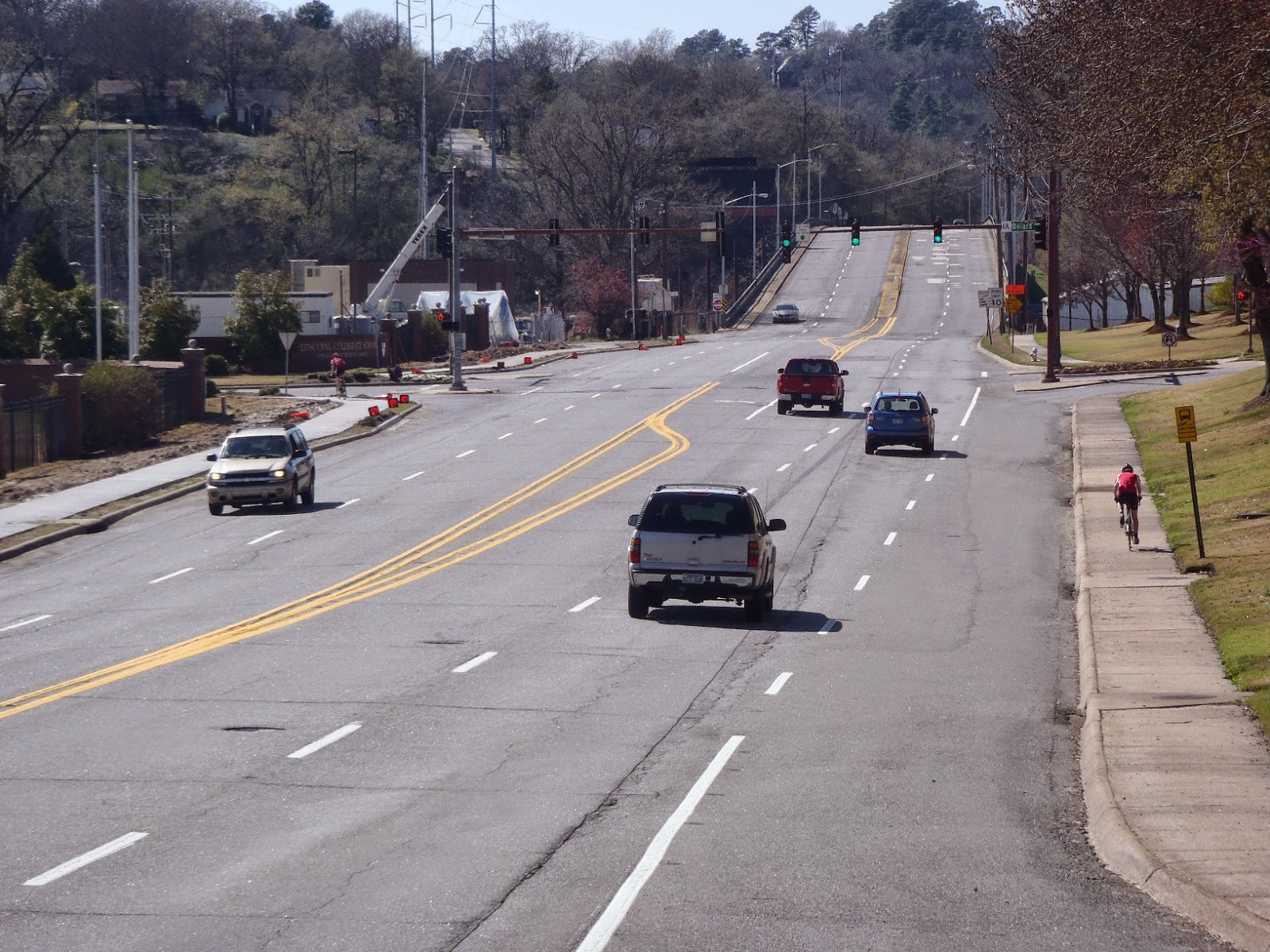 Though improved, passage along the north side of Cantrell makes for poor riding. The planned connections at either end of the section will certainly approve the approaches, and will eventually allow riders to make their way west from downtown without using Markham Street or crossing LaHarpe and Cantrell. 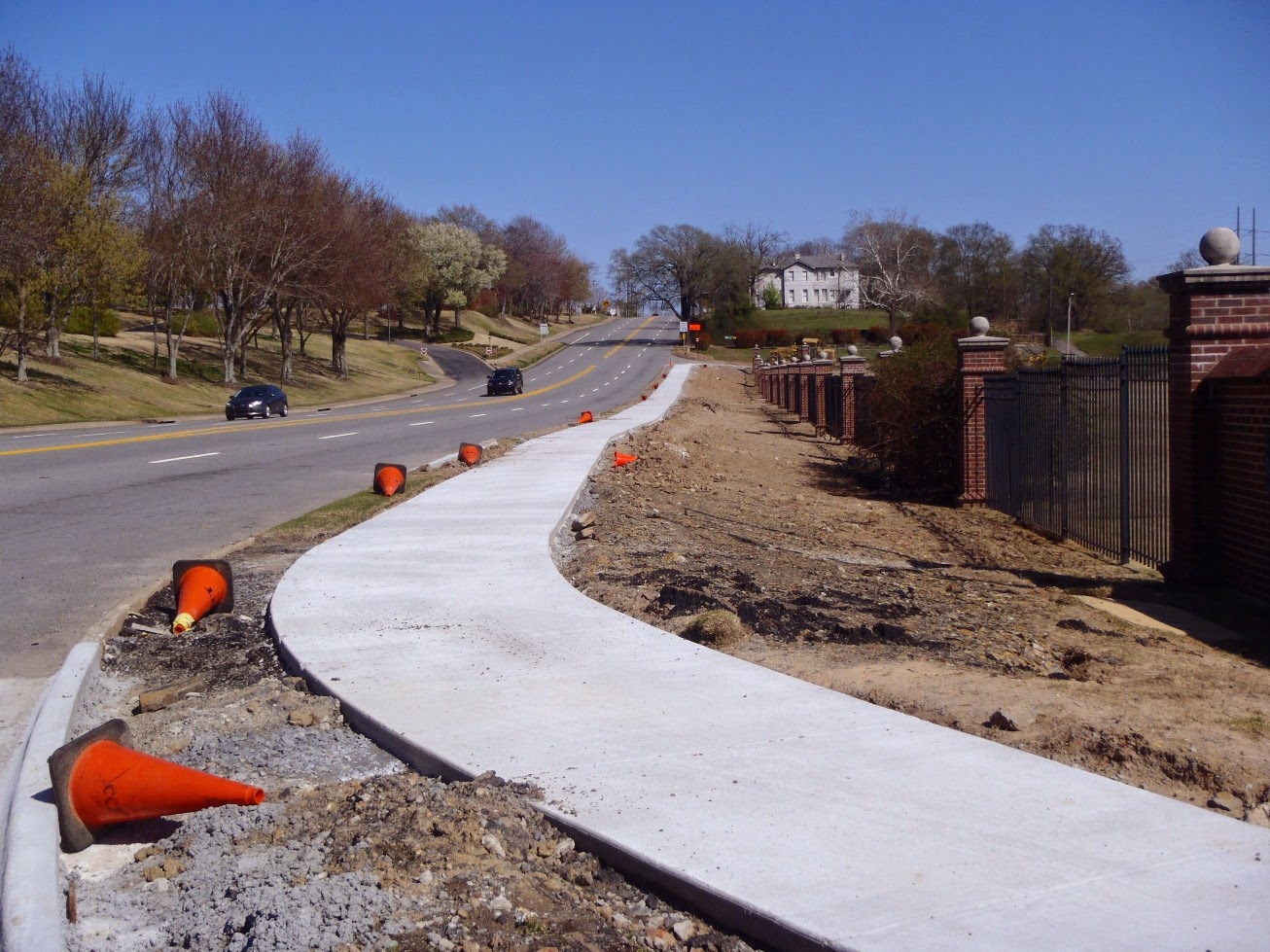 The long-term "detour" on the sidewalk in front of ECS is much improved, and I believe that, given the choice, most riders will choose it over the north side of the road.

Without unlikely cooperation from either Dillard's or the ECS interests, the choices are few for routing the River Trail through this densely developed area. Changes of heart or changes in leadership may ultimately allow for a more visionary plan, but it appears we'll be riding sidewalks for the foreseeable future.

The construction of the new Broadway Bridge is going to challenge all types of transportation along both sides of the Arkansas River for the next couple of years. The closing of the present bridge, currently planned for June 2016, will likely create more mayhem than we can imagine. It will be interesting to see if the end result is an improvement or a detriment to our trails system. I'm optimistic that progress will continue with Broadway becoming another viable river crossing for pedestrians and cyclists. Questions remain as to what their options will be when they land on the south side of the Arkansas.

We should float the idea of putting movable barricades up on n the weekends that make Cantrell one lane in each direction as it passes in front of Dillard's.

I was thinking the same thing, I find it pretty awesome that NLR pretty much shut down a lane for bikes. In NorCal they would shut down entire roads that were big cycling Routes and Golden Gate park for cycling. That stretch of Cantrell isn't busy on the weekends wouldn't be much to ask.

For the sake of transparency, NLR did not shut down the lane for bikes. The lane closure was required for construction of an approach pier for the new bridge. NLR, along with the AHTD and Massman Construction, worked to minimize the impact on traffic while making narrowed road as safe as possible for cyclists.

Here's a cheap and dirty solution to the problem.
Put a ped/bike bridge over cantrell to dillards by the school, widen the dillards sidewalk,go to north st to the end, go right and left on garland beside la harpe, left on north state where there's new blacktop to the river trail.
The new stuff must be for trucks doing the bridge but wtf.
If the city buys the marina below the cantrell viaduct you don't need the bridge.
Or blow up dillards...just kidding

Sorry,
it's N. Gaines that has the blacktop
leading to the river trail, just beside the romantic electricity sub station.