Spring Classics Are Upon Us!

Before I became absorbed with all things bicycle, like most Americans, my knowledge of the international bike racing scene was limited to an annual dose of the Tour de France. I will admit that even my interest  in the Tour only became quasi-serious when American Greg Lemond won it, and then, of course, Lance Armstrong made cycling fans of all of us with his years-long dominance. I thought that the best bike racing always took place in France during the month of July right up until my neighbor Darwin loaned me a VHS tape of a very muddy Paris-Roubaix. 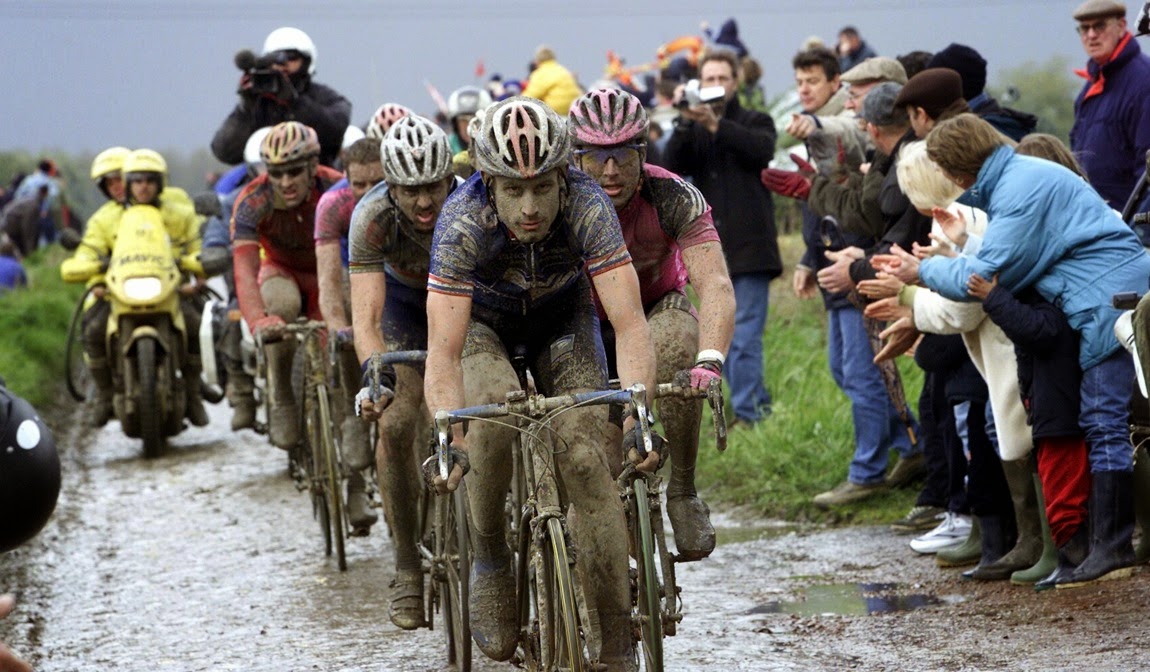 George Hincapie in the 2002 Paris-Roubaix . In conditions like this, riders are forced to the crown of the road or to the gutters in order to avoid crashing out on the slick pavé.
Photo from Cyclingtips

I won't say that it convinced me that the Tour was for pussies, but I came away convinced that the real hard men of cycling show their colors in the spring in Belgium where rain, slick cobblestones, cold, and cow shit defined the race course. The winner was decided not by team time trails or weeks-long strategy, but man-to-man in one day contests in which the first rider across the finish line wins. Period. Game over. The only second chance is next year.
Check out schedules at CyclingNews , VeloNews, this get a good overview from entry on Wikipedia. Live video can usually be found at SteephillTV or Cyclingfans.com.

A note on cycling websites: I was introduced to Velonews as the "go to" site for live race blog-style coverage. Over the years, Velonews dropped live coverage in the face of competition from CyclingNews. One was usually no better than the other but it costs money to have folks pecking away on the keyboard with live descriptions of the action. I subscribe to Velo magazine and their VeloNews website still has excellent content; just lacking in immediate coverage.
Video streaming sites: They often require some finessing. You'll usually see several sites for English language, and many will ask you to download software. I advise against downloading from any of those links. When you find a broadcast that you want, there will often be a banner ad obscuring the view. Maximizing the image usually bypasses those ads and their pesky links.

Live and delayed broadcast coverage of some races can be found on NBCSports  or beIN Sports (Comcast channel 268). I have my DVR set to record events with CYCLING as a keyword so that I can catch events without having to search for an obscure listing. You can also usually find highlights or the closing kilometers of a race on YouTube by searching the race name.

Don't miss out on some of the best racing of the season! The drama is already increasing as perennial classics contenders Fabian Cancellera and Tom Boonen have already fallen to injury, and Peter Sagan has had several poor performances, having been dropped in the final kilometer of Wednesday's E3 Harelbeke. Sagan, Tour green jersey winner and all-around top rider, had been anointed as a likely classics star.
This is vital information for those of you already plotting to take prizes in the JBarCycling Fantasy MiniLeague.
Posted by JBar at 12:10 PM