Along The Trail- Slow Times, But Just Around The Corner.....

Though the calendar is telling us that it is spring, the lingering cold, drizzle, snow and ice seem to disagree. As I type this, our weather forecast is calling for thunderstorms, then 3-5 inches of snow followed by single-digit temperatures. The Razorback baseball team  and staff spent 4 hours Monday shoveling snow and ice from Baum Stadium in order to get in a double-header. Buy me some peanuts and Cracker Jacks...and hot chocolate and a parka.
Events like the Crosswinds Classic and the Little Rock Marathon took place last weekend in dismal conditions, so hats off to those who raced or supported those in challenging conditions.

As previously announced, the ART through North Little Rock's Riverfront Park has been detoured on to Riverfront Road. The detour is fairly well marked, thought the promised signage alerting motorists to the fact that they are sharing the road is minimal. 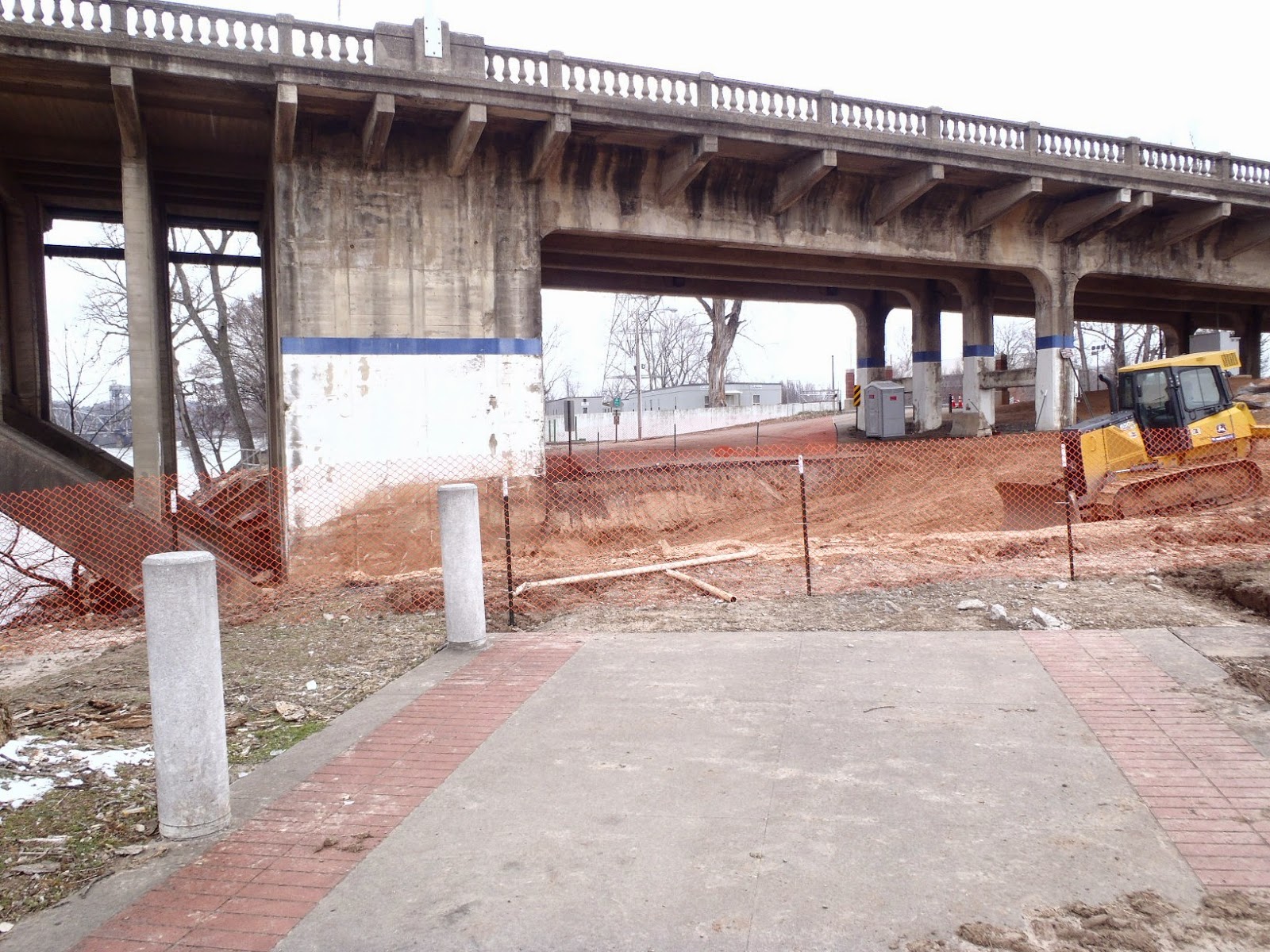 Last week, a few scofflaws disregarded the signs and rode through the construction zone. I think that we can safely say "Trail Closed" now. 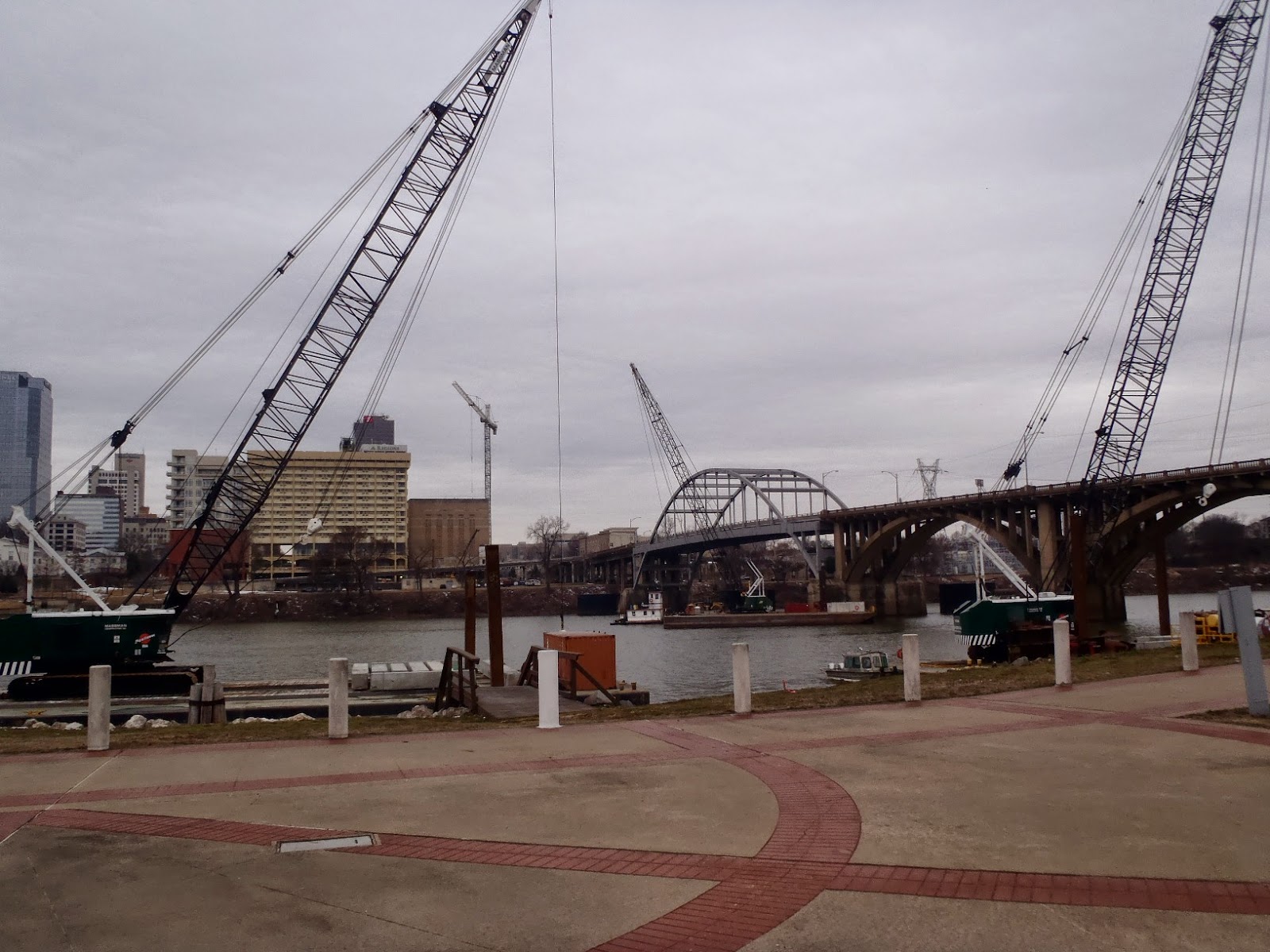 Barge mounted cranes will be the norm along the downtown waterfront for the next year or two.

We all knew that the replacement of the Broadway Bridge was going to disrupt road and River Trail traffic, and that disruption is upon us. The crappy weather has kept trail traffic to a minimum, but as daylight savings time kicks in and spring inevitably comes, the riding community will have to make adjustments. Many groups ride from the submarine and they will immediately be forced out on to Riverfront Drive. I think that will be manageable until the Broadway Bridge  is closed to automobile traffic. I think that we will have an opportunity to give the City some feedback in the interim. If you ride this stretch and see room for improvement, make suggestions through your alderman if you are a North Little Rock resident.

Some big event rides are already adjusting, with the BDB100 shifting the start to Riverfront Drive and Olive St. in North Little Rock (near The Enclave)  and the CARTI Tour de Rock moving its start from Burns Park to the US Bank at Broadway and Main.

Where are those pesky weekend crowds? 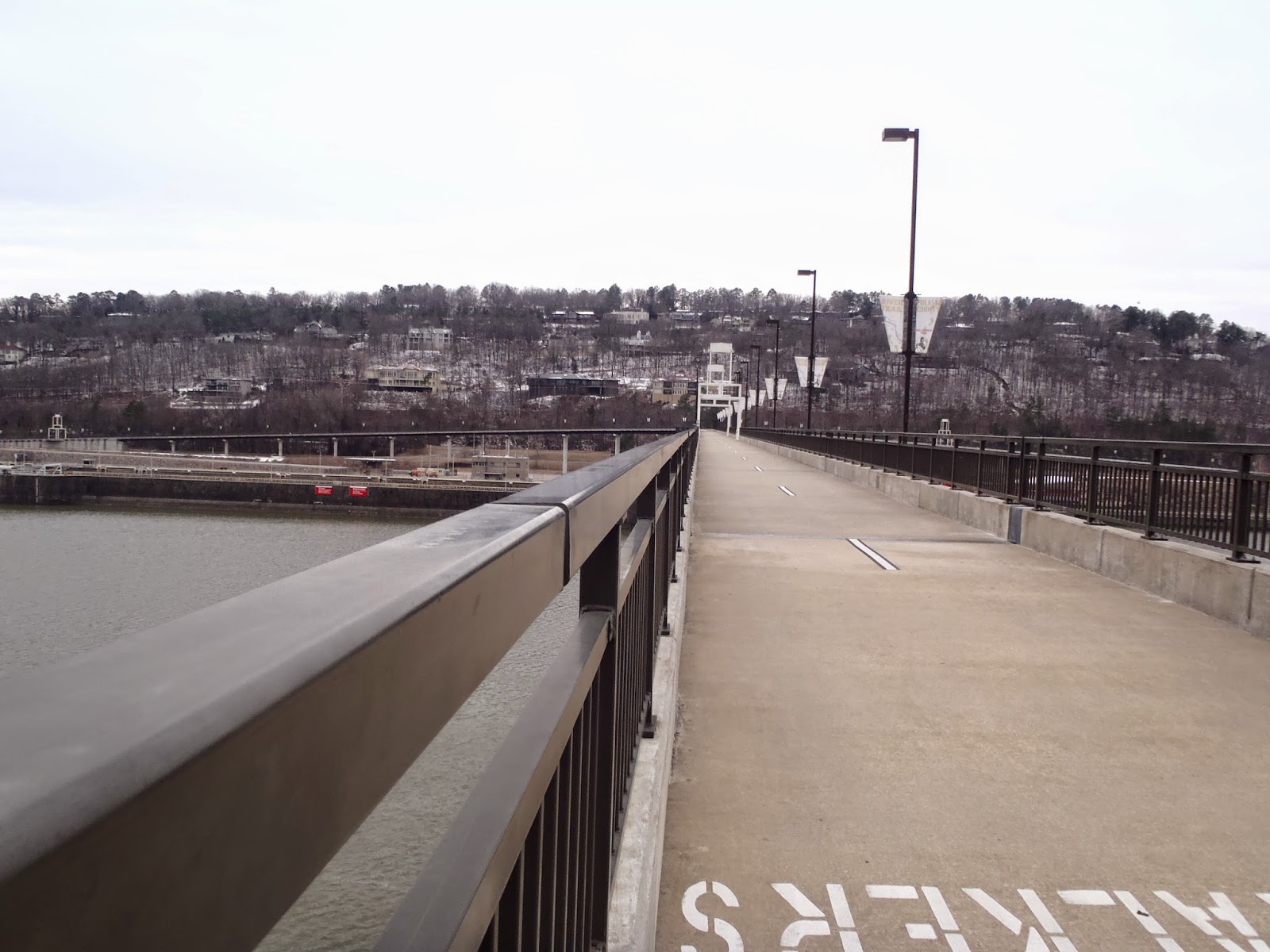 Weekend crowds have not been a problem on the BDB 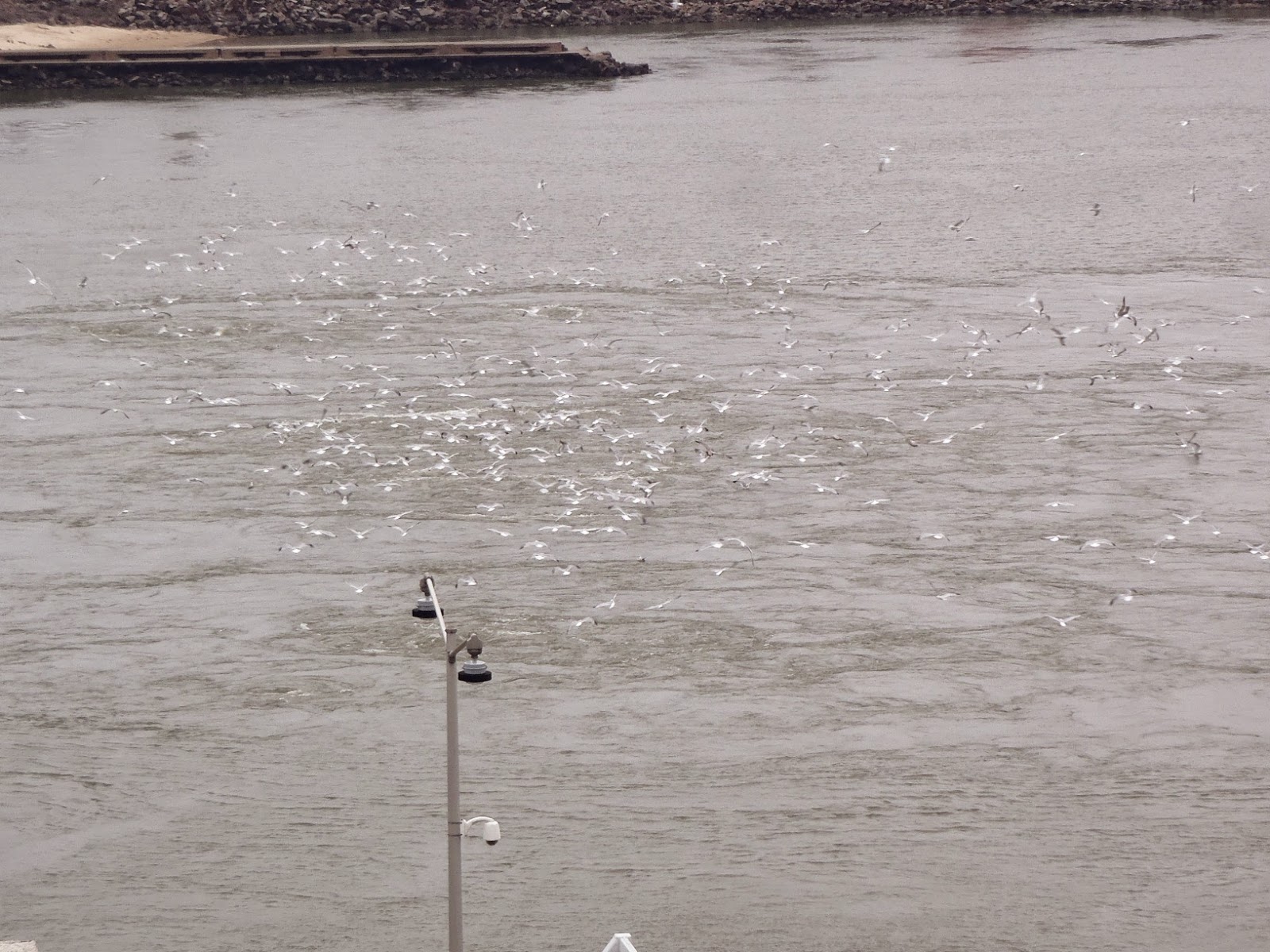 Below the BDB, things are a little more active as gulls and pelicans compete for stunned shad coming through the dam. 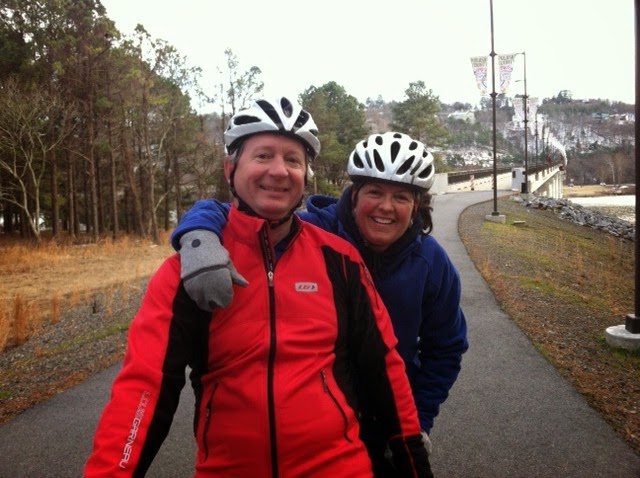 The trail was not totally devoid of tourists.

I ran into Shawn and Jill as they attempted a tandem selfie on the BDB last week, but they found their arms were too short to get the 2-seater in the frame. I offered to take the photo for them, and then dragged them up to Two Rivers Bridge before they turned back to try to get downtown before dark. He was from Texas and she from Wisconsin. They were headed north to her home, but were very impressed with what they found when they decided to take a ride here. I didn't hear what prompted them to get on the bike, as they had no information the bridges and trail system  but were delighted with what they found. they were already plotting a return trip. 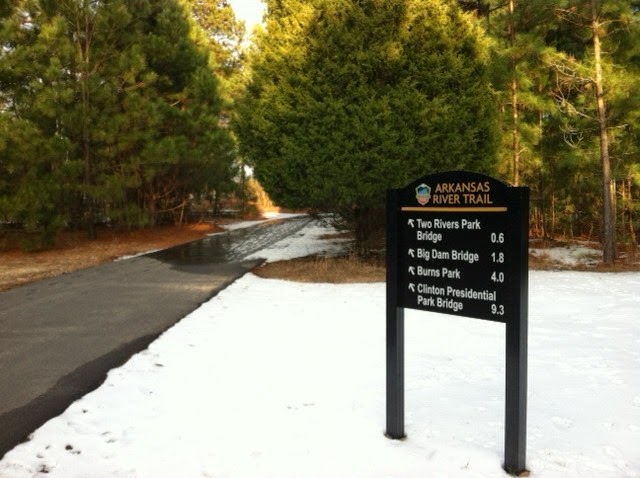 Snow and ice can linger for days on the bridges and shaded parts of the trail. Forecast rains should clear the remain snow just in time for the next round of winter weather. Hopefully, our last for the year.

The first week of March is usually full-on spring in Arkansas, but as we brace for yet another round of snow and ice, we can take some comfort in the fact that sunset will be after 7:00 PM starting Sunday and us working folks will have more evening ride opportunities. That is a good thing, but I'm not putting away my tights and shoe covers quite yet.

I've had a couple of e-mail exchanges with Gina Fullerton, one of the owners of the Pinnacle Valley Restaurant, which has opened at the corner of Beck Road and Pinnacle Valley. I had reported that their "soft opening" menu consisted of mostly burgers, catfish and barbecue. Good stuff, but not exactly ride fare. When I rode out last Sunday, I was pleased to see an extensive Sunday brunch menu, breakfast all day, and very reasonable prices. White tablecloths and a fresh interior gave the place a very nice feel. They will be opening a convenience store space, and plan to gear some of their offerings to the needs of the riding community. They will have some form of bike parking and will welcome cyclists.

They offer beer and wine, and though the place is adorned with Bud Light banners at this time, they are carrying craft brews from the Lost 40 and Lazy Magnolia breweries.Lazy Magnolia is located in Kiln, Mississippi.and they advertise as "Mississippi's oldest brewery" as they approach their 10th anniversary. Of course, Lost 40 is Little Rock's hottest new brew house and they are quickly earning a reputation for their fine beer.
I'm looking forward to dropping by for a weekend after-ride "second breakfast" and our occasional Wednesday evening brews cruise may have found a new destination. Gina assures me that we will be welcome, road grime and all.