Dear Counsellor, Thank you for your concern and the cool refrigerator magnet.....

Yes, the attorneys of our fair city and the surrounding area were quick to follow up on the filing of the accident report from my car encounter last week. Why, the Taylor King Law Firm of Arkadelphia was so concerned that they sent me four letters in a single day!!! Much to my disappointment, King was one of only a few firms that did not include a refrigerator magnet. He did, however, include the largest "post-it note with longhand script to look like a personal message". I'm glad know that he is "on my side and by my side", though if he is really by my side, that could be a little creepy. I don't know the guy, so why is he there? 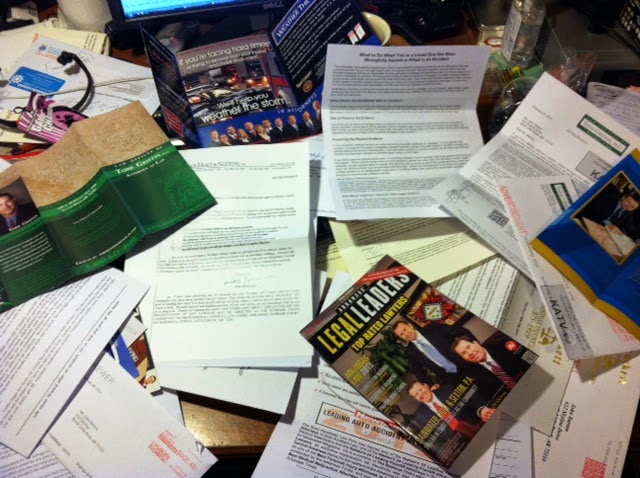 Traffic accidents are good for the printing business and the post office, and accident reports from the NLRPD cost 15.00 each, so personal injury lawyers have a cost associated with lead generation, along with stiff competition. Rainwater, Holt & Sexton handily won the battle of the lawyer refrigerator magnets with their Razorback football themed entry. The Minton Law Firm walked away with the "Mr. Practicality" award for including a calendar.

Thank goodness that Michael Crockett is there to "save me from a nightmare". I wish he'd been there the other night when I dreamed that I got a chance to play some music with Johnny Cash and my E string broke. And then Johnny told me that my best original tune sounded just like "Wagon Wheel". I was bummed. Double bummed. Perhaps Crockett could have either woken me up or quickly slapped on another string. Given the fact that the man in black has passed on, I feel like I missed my only crack at getting him to give my song a listen. Maybe that wasn't a full blown nightmare, falling into what I refer to as "frustration dreams", so I may have been out of luck even with Crockett on my side.

Some folks give ambulance chasers a bad name...

I'm glad that I don't need the services of these guys. They serve a purpose, but can also tempt honest people to go for some easy money and serve as a vehicle for dishonest folks to scam the insurance companies. I had a minor accident in my truck a few years ago while returning after dark from a ride along the river. In negotiating gridlock concert traffic near then-Alltel Arena, I had a 4 MPH fender brush with another vehicle. I was at fault, but the officer said, "I can't give you a ticket for this.", due to the conditions and the fact that the police were directing traffic. Unfortunately for the other driver, he was driving his girlfriend's car on a suspended license and with no proof of insurance. I thought the cops were going to have to cuff the young man as he threw a fit, stomping around the scene and raising hell after being told they would have to call a wrecker or have someone else drive the car home for him. I felt bad about his misfortune. That is, until I found that he had engaged a "personal injury consultant" who sent him to a chiropractor, where he was found to have "soft tissue injuries" and claimed several thousand dollars for treatment and "pain and suffering" from my insurance carrier.

There's an incredible new opportunity that is now available online.

This is available to anybody in the world!