Along The Trail-Sweeping The Desktop

"Along The Trail" is a catch-all title for this semi-regular feature that attempts to touch on just about anything of interest that I run across during the course of rides along the Arkansas River Trail. Sometimes, a couple of items are enough to provide adequate content. At other times, photos and minor news items pile up until I decide that it is time to sweep the desktop. Here we go with one ofthose scateershots!

Work and commerce
I'm always intrigued by the equipment and people that keep the river traffic flowing and the systems working along the river. Little boys are always excited by big machines and that excitement dims only slightly with age. Having grown up in North Little Rock, that Arkansas River has always been a part of daily life, even if only in crossing one of the bridges daily for work and play. The site of my office for several years on East Markham is now the approach to the Clinton Library. My window there offered a close up view of the wildlife, rail lines, and barges that occupy the river and its banks. When my company moved to an industrial district away from the river, I missed it greatly. Then came the Arkansas River Trail, along with my addiction to riding bikes, and I once again found myself close on the banks of the Arkansas on a regular basis. There have been a few nice ride days in the last couple of weeks and I've tried to take advantage of them! 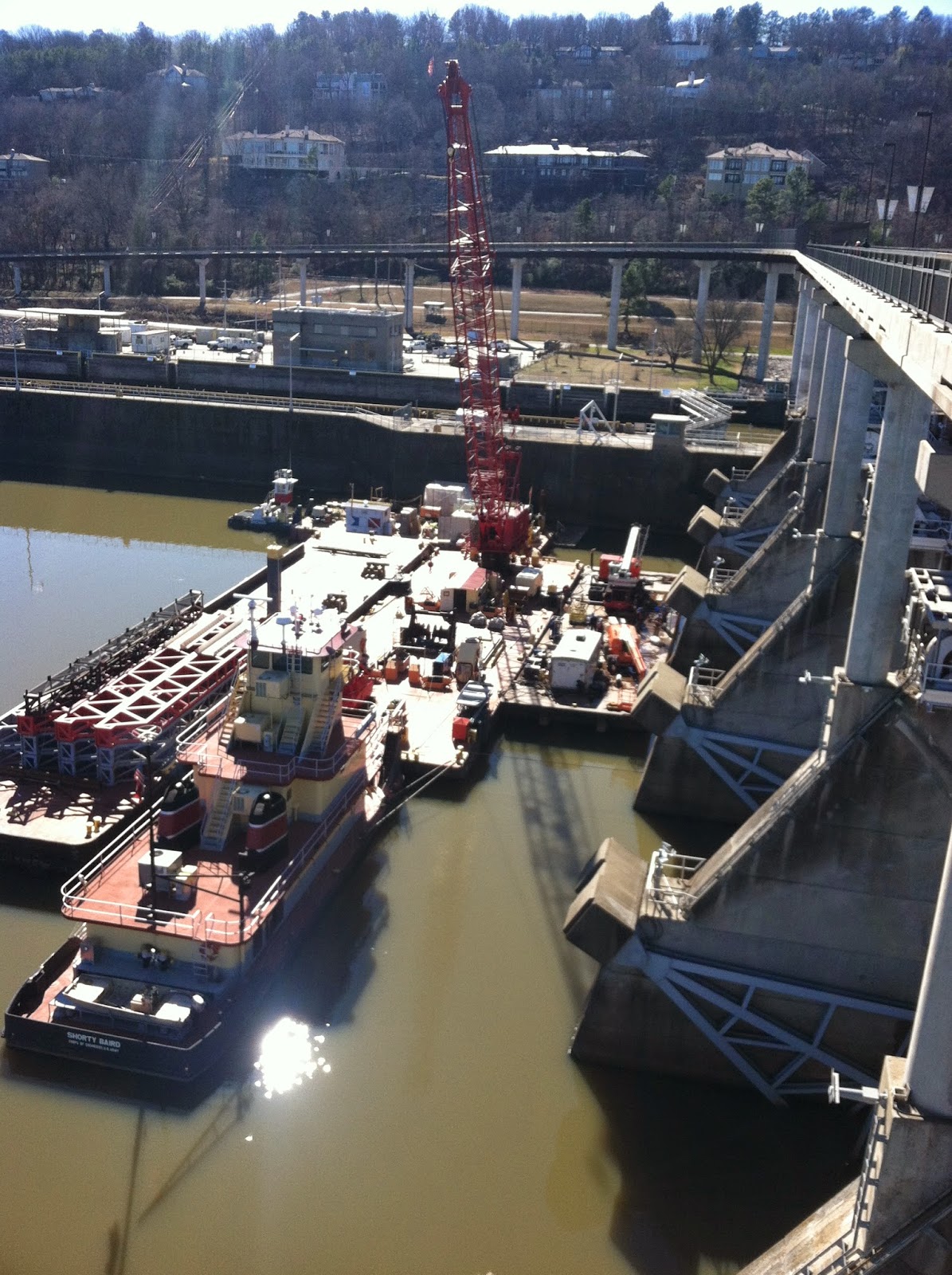 It is always interesting to see maintenance being perfomed on the dam gates. You rarely get to watch a large crane in operation from 90 feet up and only a few feet away. 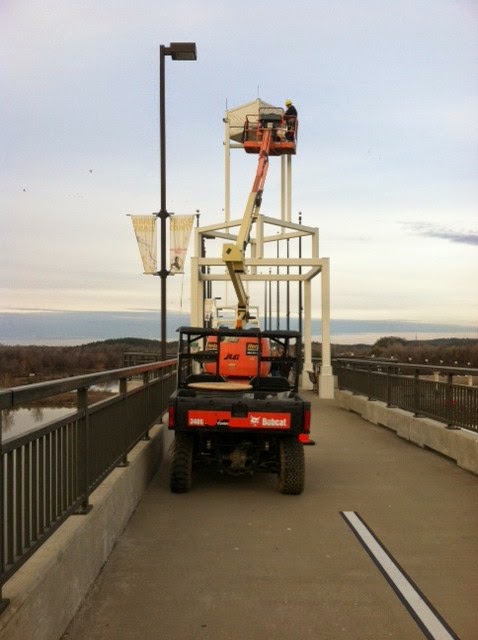 Technicians from Koontz Electric have been replacing the LED lights on the BDB. They finished the first phase and will be back soon to complete the job. 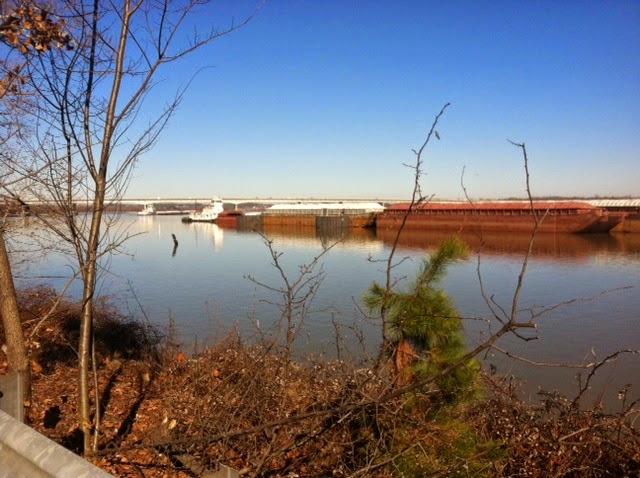 Even commercial barge traffic can create an inspiring scene on a day like this one. 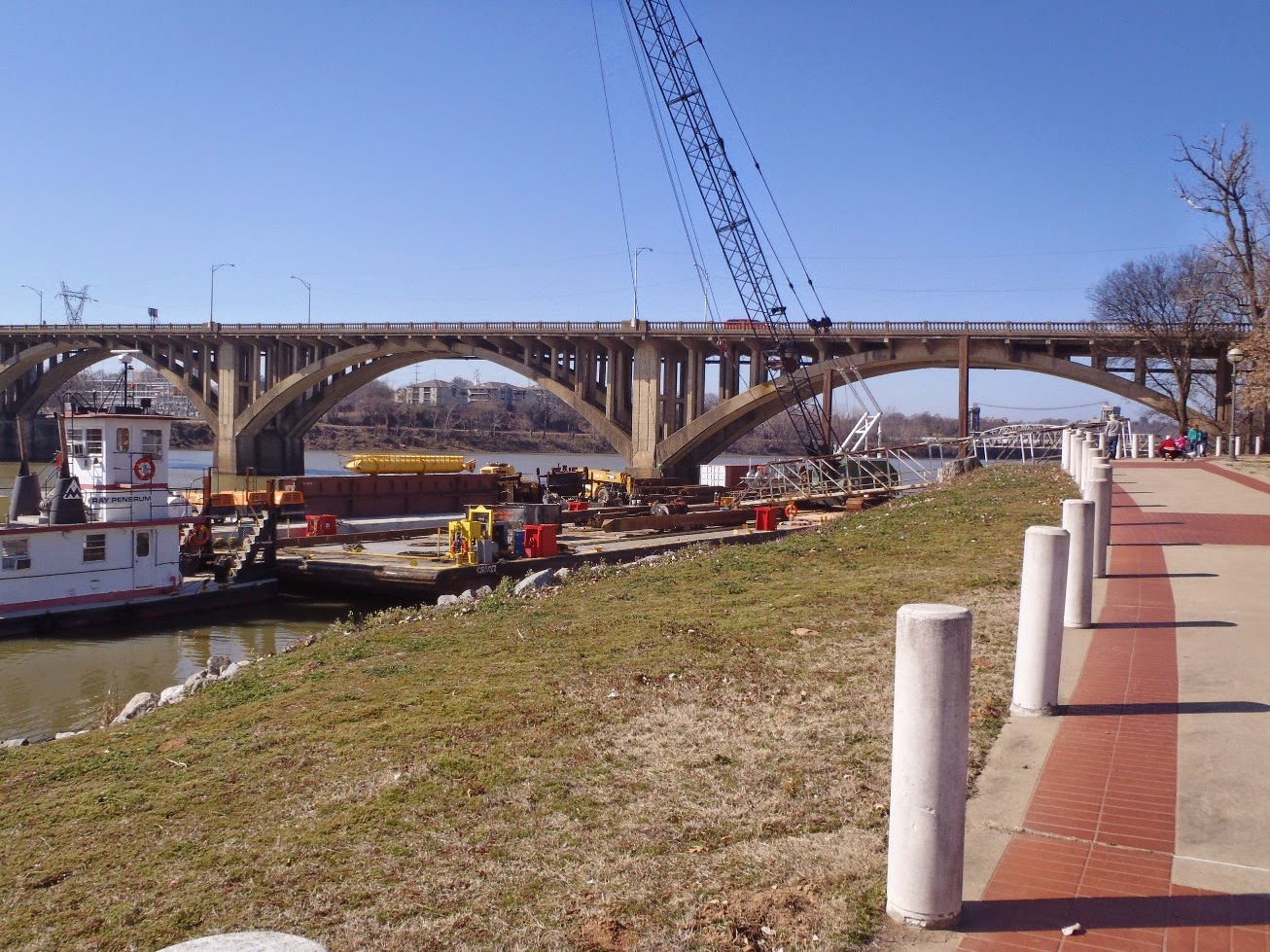 Aonther work barge has been moored at the North Little Rock Riverfront Park. 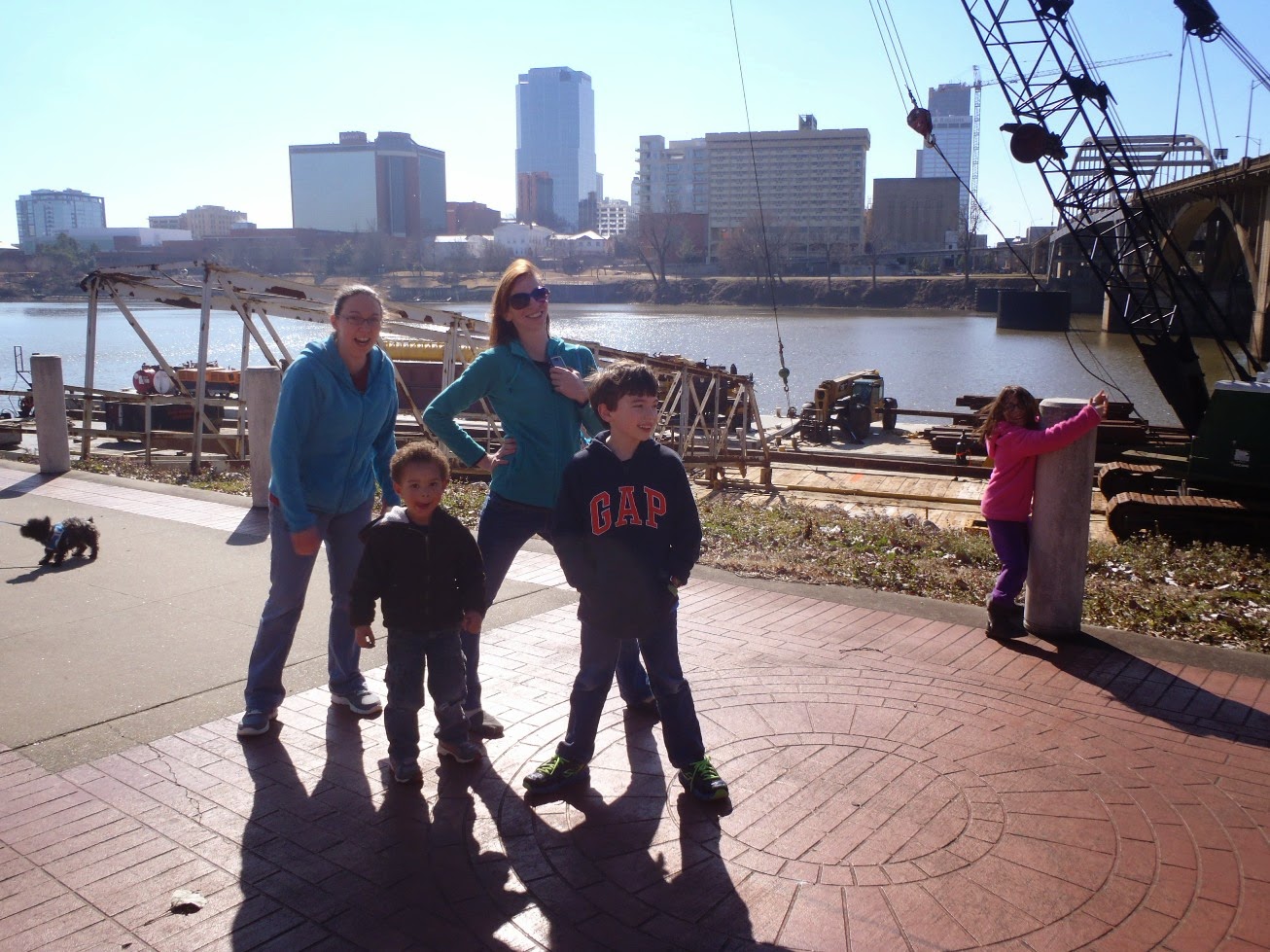 Posers.
I was trying to get a shot of three boys checking out the crane, but their mothers quickly snatched two of them up into a pose. The third and smallest of the boys managed to make a quick exit after giving his brother a swift kick to the crotch.
It was a windy day and it looks like the small dog is about to blow off of his leash as the little girl hangs on for dear life. OK, it wasn't quite that windy.


Trails and hanging out 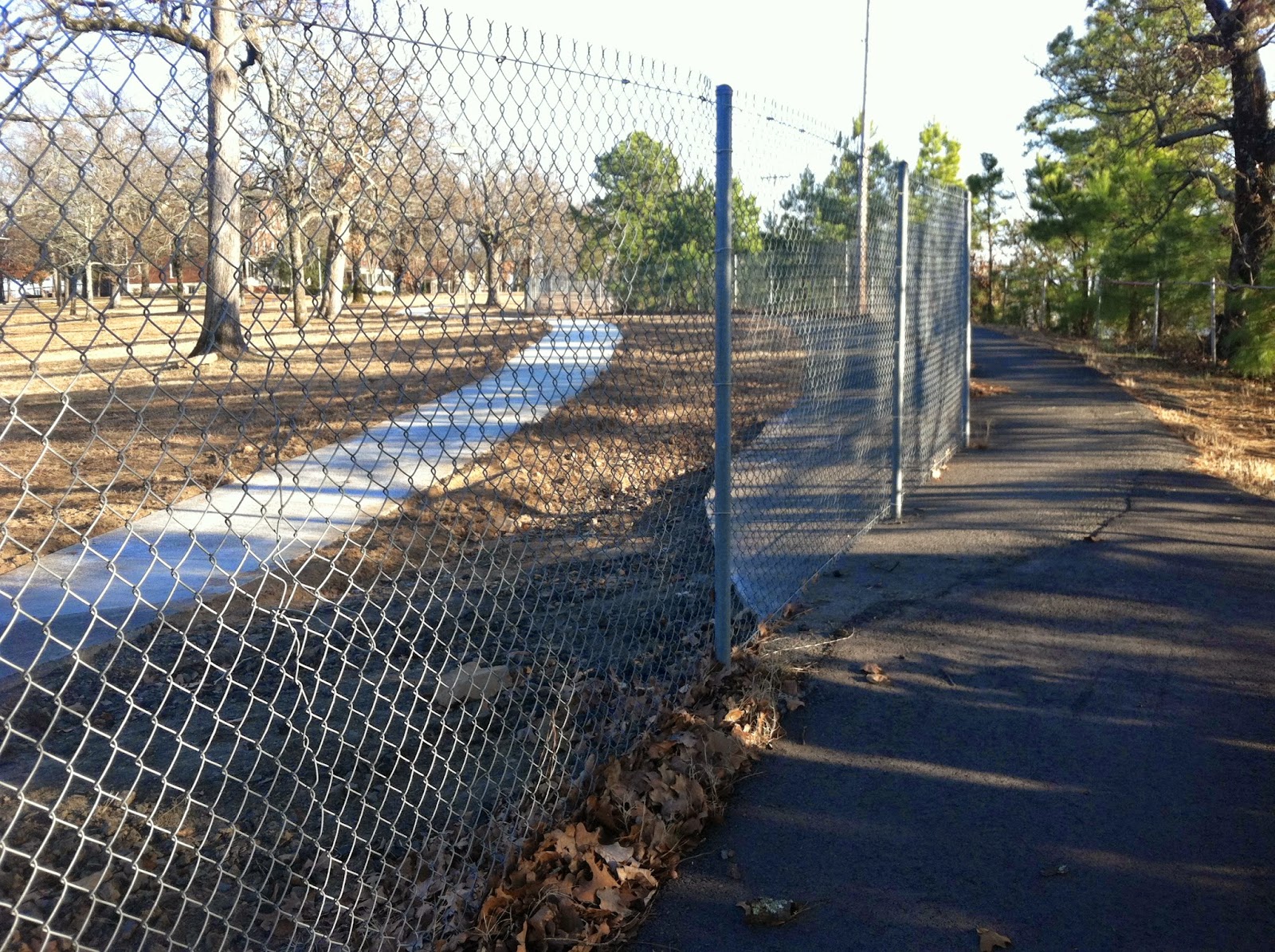 North Little Rock reached an agreement with Fort Roots to allow them to move the fence back far enough to widen a remaining unfinished stretch of the Highlands Trail along the bluff. Part of the project was a new walk inside the fence for patients and employees of the facility. It looks like things are progressing. I expect that at some point the trail will be closed for a few days. 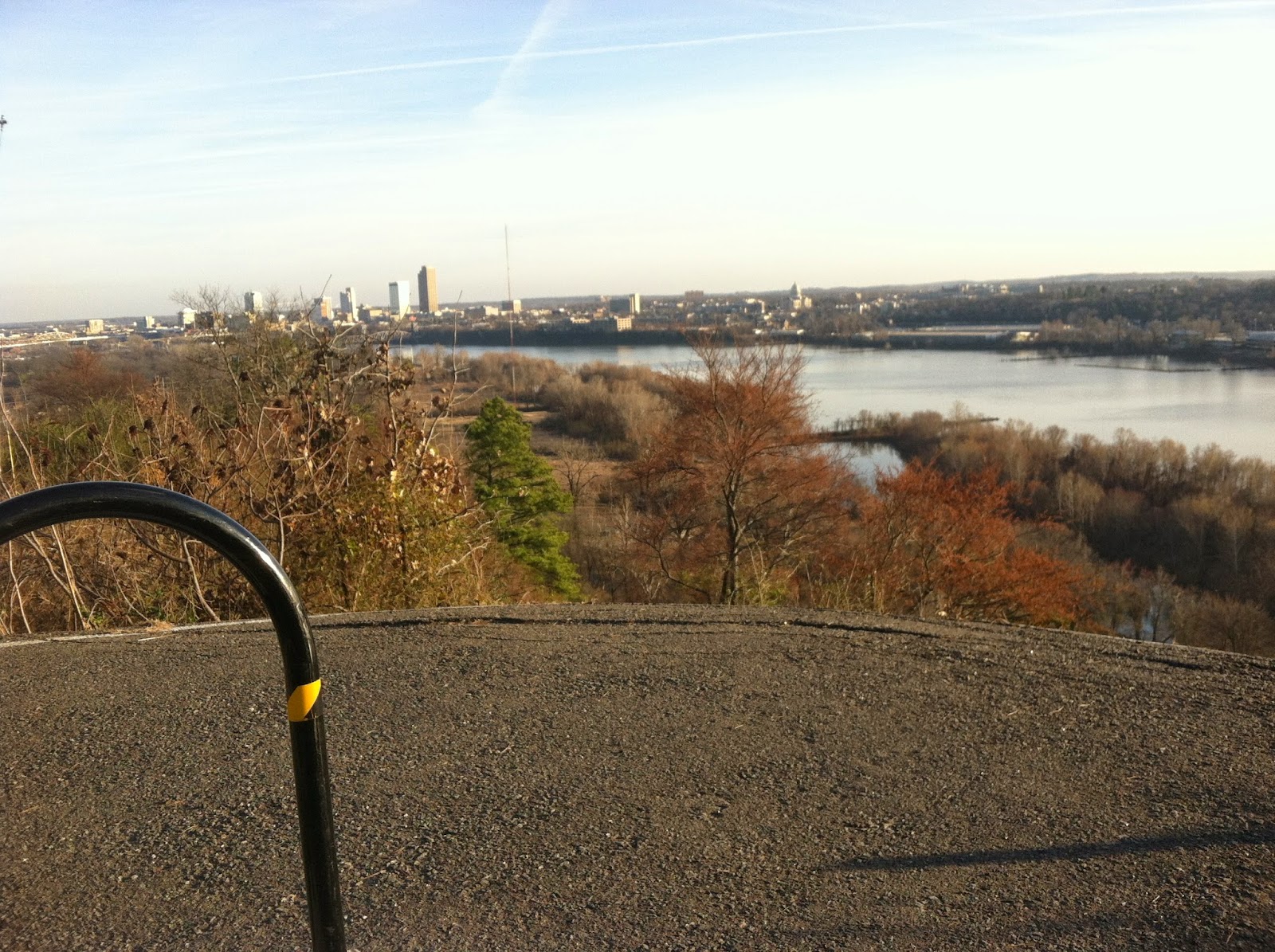 The Highlands Trail offers great views up and down the river. Access from River Road and Paul Duke Drive. 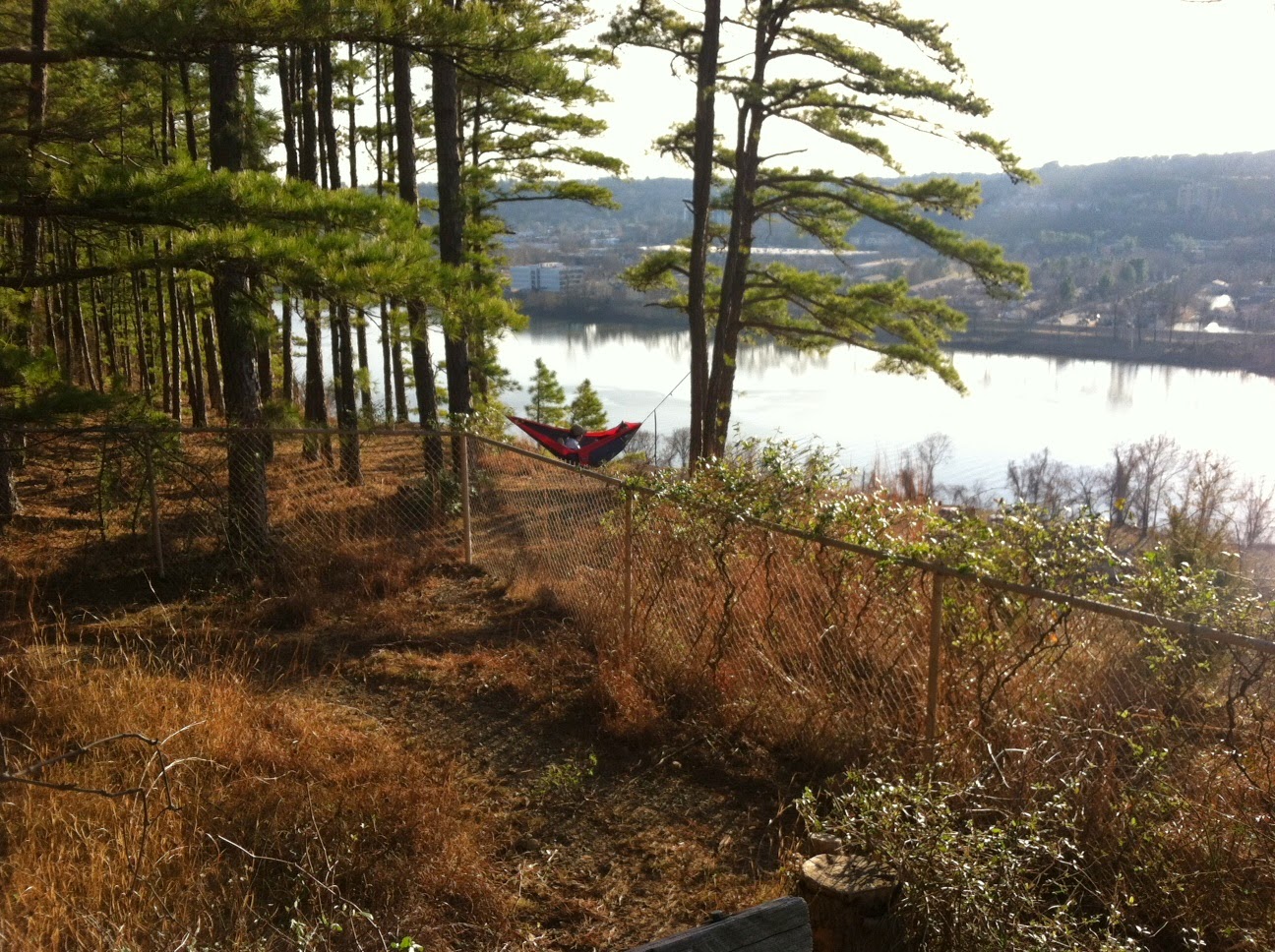 This couple found a great place to string up their hammock, soaking up some sunshine above Big Rock Quarry. 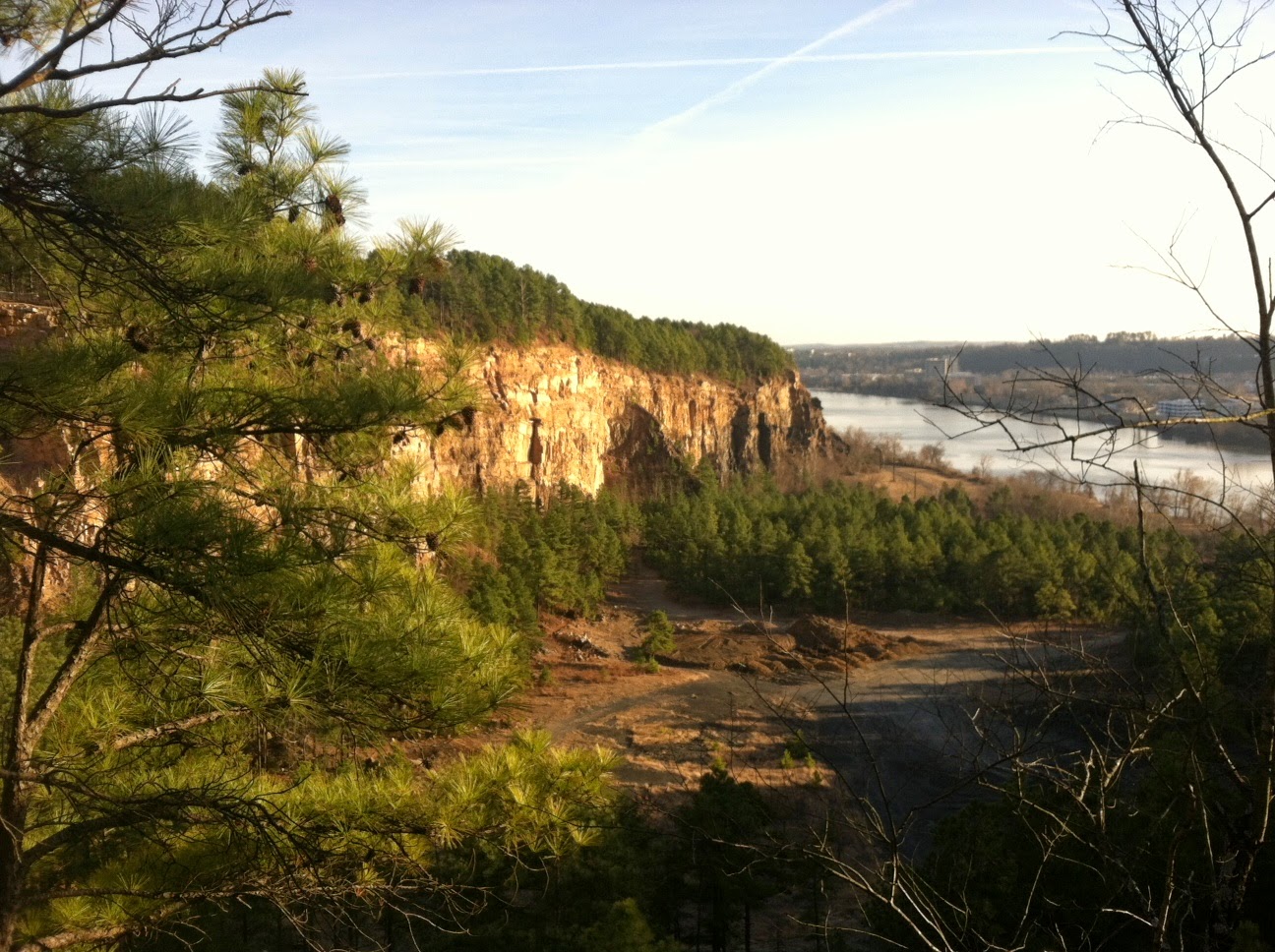 Big Rock Quarry, looking toward the hammock site from the Emerald Park gazebo. I didn't want to get the happy hammockers busted for hanging close to the edge and ruin their spot for them, but was assured it was a one time thing. 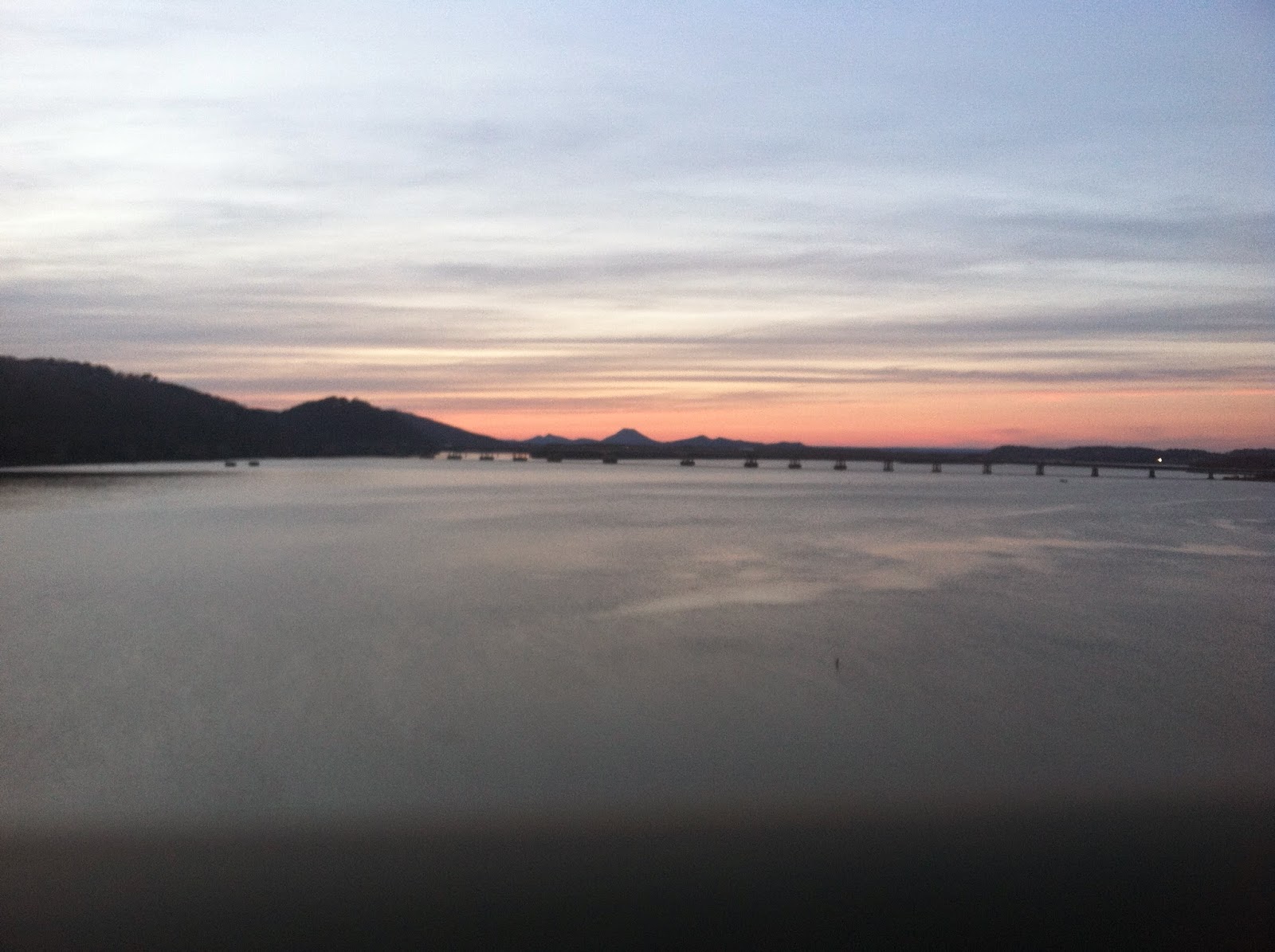 From the BDB, even a cell phone snapshot of the sunset is worthwhile.