I reported here back in August on sewer line work to be done in conjunction with the rebuilding of the force main station near the Episcopal Collegiate School on Cantrell. I've learned a little more about the project, and it will be more extensive than was my original impression. My current understanding is that the new sewer lines will run from the pump station, go under the ECS driveway to the east, then under the UP tracks and across LaHarpe to rejoin North Street near Chester. I don't have much more detail than that, so I'm unsure of the degree of above-grade disruption. It promises to be significant.
Plans call for the ART to be detoured from the light at ECS across to the north side of Cantrell. 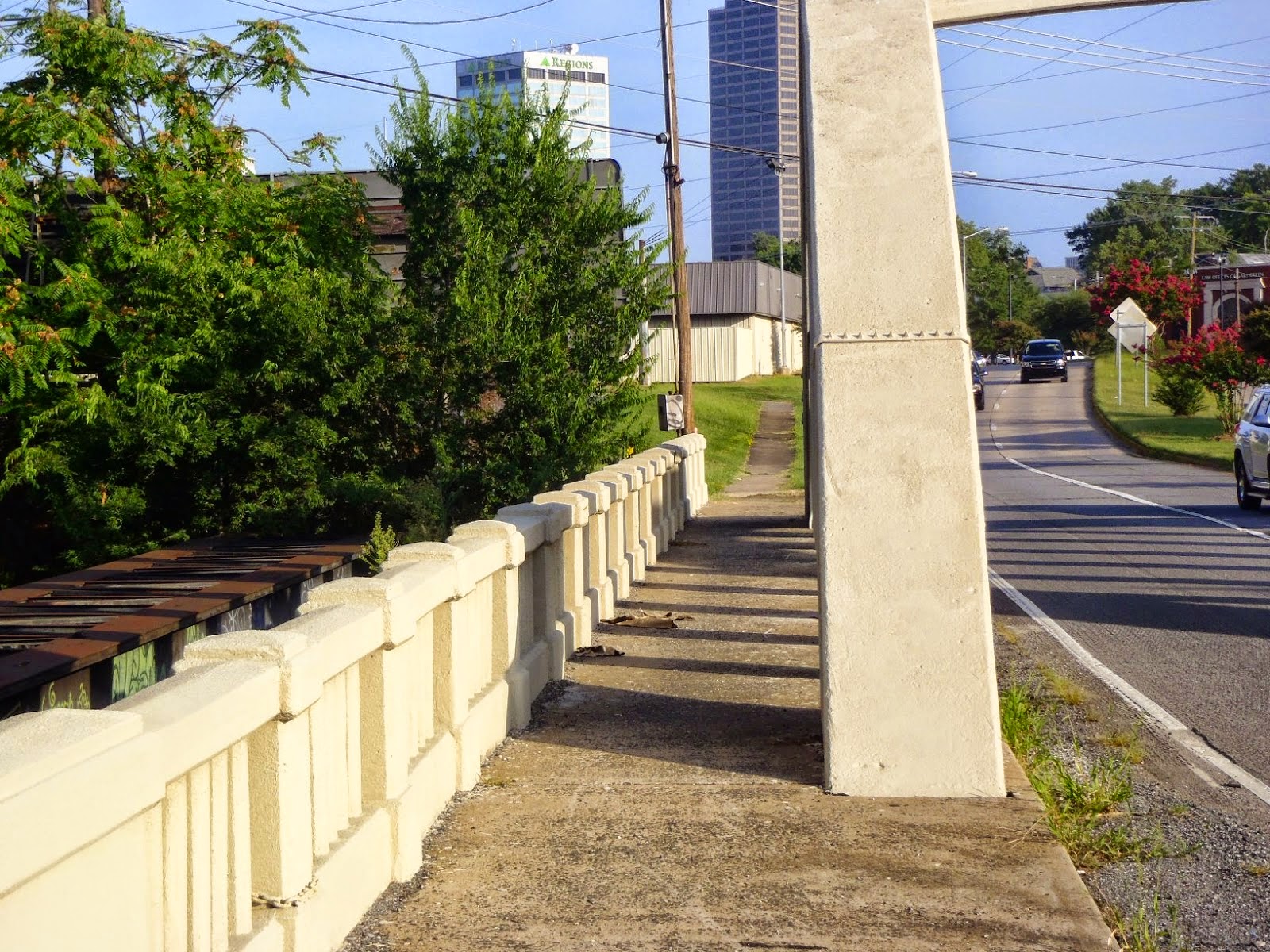 Where do we go from here?
The sidewalk there is to be widened to accommodate the detour. As noted in my earlier article, the temporary detour will be even more convoluted than the current seemingly permanent detour in front of ECS. That said, the options are few in this densely developed area and locals will manage. My sympathy goes to any visitors attempting to navigate the River Trail loop during this project.
My understanding is that work is to begin on November 10.

East and West Terminus Projects
As you may recall, projects are planned to build new approaches east and west of the Dillard's property to eventually tie into the proposed River Bluffs trail section. The Gill St. project to the west should begin in 2015 and be completed in 2016.
The project to cross the UP tracks to the east has run into a big snag as concerns about the geology of the bluff and the effect of required hillside cuts have come to light. As always, it is a matter of money.
The completion of the River Trail in this area continues to be a huge challenge, as evidenced by the fact that my article on the River Bluffs proposal was dated November 2011 and, though there has been some incremental progress, there is nothing on the ground in the form of concrete and steel. Go to the linked River Bluffs article above and watch the 5-minute video if you need to recharge your enthusiasm for what could be a spectacular addition to our community.

The challenges are aplenty...
Money is always the key, and the "red wave" of the recent election does not bode well for the funding of alternative transportation projects. Republican lawmakers are typically more beholden to oil and gas interests than to anything that could help reduce dependence on those fuels, and many of the current generation of anti-government far-right legislators see little role for government in improving lives through things like parks and trails. That said, the election of Barry Hyde, a Democrat and a cyclist, as county judge, and folks like Staci Medlock , an avowed supporter of the trails system, to the Quorum Court gives us some hope locally. The simple fact that they have experienced the River Trail and have seen the benefits, both to the local economy and to our health and well-being, should be helpful in driving decisions to continue the progress that we have seen under Judge Buddy Villines.


Public Meetings
Decisions on public policy are sometimes made as we might suspect-- over cocktails at the country club where someone with special interests bends the ear of an official of some sort, while picking up the tab and handing over a campaign contribution. Yes, that happens, but policy is often decided by those who show up.

Here are some chances for you to throw your political weight around:

I bet that crusty traffic columnist is a democrat.

No, he's a cold-hearted Republican. Not a compassionate Republican like yourself.