I usually try to vary my topics a bit, but this is timely.
I was invited to sit in on a meeting at the Little Rock Department of Public Works regarding the pipeline project that is getting underway near the Episcopal Collegiate School on Cantrell.

Representatives of Little Rock Wastewater, the City of LR, Arkansas River Trail Task Force, RJN Group (engineers), and S&J Contracting gathered to discuss how to best accommodate cyclists and pedestrians while the large sewer main that runs along the trail route is being replaced. 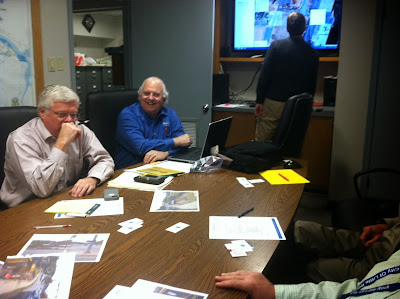 I've discussed this in some detail in previous articles, so I won't bore you with more specifics.
Here are the basics:
-S&J got "notice to proceed" on on Monday, November 10, on the project to replace a pipeline that roughly follows the "temporary" ART route from the pump station at the foot of the Cantrell viaduct east to the UP RR tracks and beyond.
-The project will require major excavations and boring to go under the ECS driveways and the UP tracks.
-Substantial completion is expected to take 170 days-until April 29, 2015, with the section around ECS being done, hopefully, by around the first of the year.

Initially, riders and pedestrians will continue to use the present route along the sidewalk in front of ECS, but there will be large bore pits next to the sidewalk from which dump trucks in the adjacent turn lane will be loaded across the walk.

The next phase will have riders and pedestrians crossing Cantrell and using the sidewalk on the north side. Some minor improvements will be made to that sidewalk to help in getting past utility poles and curbs between the traffic light at ECS and the connection to North Street heading east. (Clarification for those folks not familiar with the area, there are short sections of North Street on both sides of LaHarpe. )
Riders will then need to cross Cantrell again at State or Chester Streets to rejoin the bike route on Markham.

BOTTOM LINE
The area will be a big damn mess and will be best avoided for the foreseeable future, BUT it will remain open to cyclists. My suggestion is that you avoid it unless your transportation needs force you to use the route.
The contractors and the City are all trying to work with the cycling community to assure that the trail stays open and to help move pedestrians and cyclists through the area as safely as possible. Be patient and remember that the workers on site are not the bad guys. They're just doing their job.

Update: I just received a note from the contractor that they have placed some informational and warning signs at the request of the City. 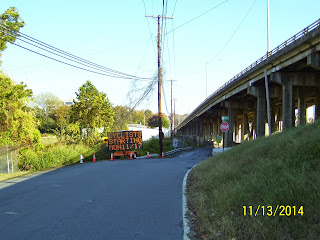 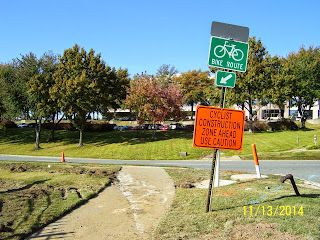 Everyone is doing their best here. The fact is that there just isn't much room along this stretch, so be patient and prudent.
Posted by JBar at 2:07 PM