Orbea Move- It Is Official

You read it here last week, but there was a news conference last night at the Capital Hotel letting the rest of the world in on what JBar Cycling readers knew. Well, you guys knew most of the story, anyway!

Tony Karlins confirmed the move to 119 S Main Street, and added some details. 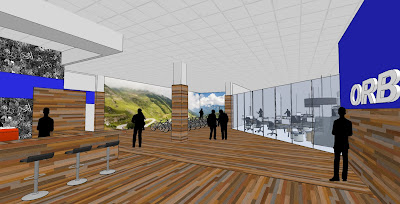 From the front entrance, visitors will see the coffee bar, display area, and a view of the private offices.
As reported, the new location will include a retail display area and coffee bar, which will be operated in partnership with local Orbea dealer Spokes. While Tony described the current location as prison-like with its razor wire and perimeter fence, the Main Street location will be very inviting to both the public and to visiting Orbea dealers and prospects. 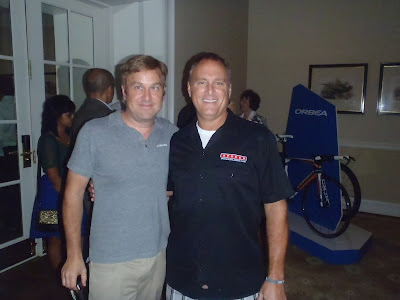 Tony Karklins of Orbea USA and Mat Seelinger of Spokes: International bike presence partnering with a local bike shop for an exciting business model.
Over the last few years, the needs of Orbea USA have shifted so that the operation is less focused on bike assembly and more focused on adding value to the product line and building on the dealer organization. Where the current model has sales reps calling on prospective dealers with a limited sampling of the product line, Karklins says, "Now, we'll send them a ticket, put them up in a first class hotel, and allow them to see the entire product range".
The bike business, particularly at the high end, has evolved from one in which frames were built up with component groups either at local bike shops or at distributors. Currently most bike builders like Orbea (and Trek, Specialized, Pinarello, etc) ship complete bikes with carefully matched groups and accessories. The modern model means more sales dollars for bike manufacturers, closer control of product offerings, and generally more value for consumers. Karklins said that their 20 local employees would be making the move, and some would be shifted to other positions to reflect the change in the profile of the operation. 4 to 5 "global" positions will also work from this location.
From the press release:
"Downtown Little Rock, was a natural choice. The re-development of Main Street is changing the face of Little Rock, and we are proud to be part of it. With quick access to the River Trail network, our new facility is easily connected to almost every neighborhood of central Arkansas. We look forward to hosting our dealers from around the country and showing them the outstanding cycling culture of central Arkansas," says Tony Karklins, Orbea's North American Managing Director.

The Main Street location will also include a new project dubbed "Orbea on Main", a joint venture between Orbea and local retailer, Spokes. The 3,500 square foot Orbea on Main will be a retail showroom for all products distributed by Orbea plus a select few items from our favorite partners. "We look forward to pioneering retail in the Main Street re-development and expanding the Spokes brand in central Arkansas," says Mat Seelinger, owner of Spokes.
The Orbea on Main showroom will also be used by Orbea for product launches, media interactions, dealer events and video creation. "We are working hard to make Orbea on Main, one of the best bicycle retail environments in the industry," says Karklins.
We're delighted that the decision was made to keep Orbea USA here in our community. Central Arkansas has a robust and growing cycling culture. Folks like Tony Karklins, Mat Seelinger, and  Michael Chaffin of the Capital Hotel  are building on cycling as a dynamic for economic growth.

Little Rock has been named recently by publications as diverse as Kiplinger's and Outside Magazine as a top destination for living and for recreation--and both named the River Trail and cycling as  key quality-of-life components of the positive ratings.
Posted by JBar at 6:10 PM

If the warranty is like Steve S. says below, I will be looking into Orbea. Anyone one else have any feedback to share on their Warranty support? Thanks.

"I can vouch for Cervelo and Orbea honoring their lifetime warranties. While helping out at a local bike shop, I saw some well-used bikes come in with frame problems. In all cases the frames were replaced by the company. In at least two cases (one Cervelo and one Orbea) the model was no longer in production. Both owners received a current model as a replacement. "