As many of you may know, Orbea USA recently sold their headquarters building on North Broadway in North Little Rock to Diamond Bear Brewery. Diamond Bear has long outgrown their Little Rock space and will be moving the brewery and tasting room to the NLR location. It will be a convenient stop from the nearby River Trail! Thirsty riders will likely be appreciative of having a nearby and, hopefully, bike friendly place to enjoy a post-ride cold one. The move left open the question of what Orbea was going to do next.

I have been gently badgering Tony Karklins of Orbea over recent weeks for detailed information about their plans, but Tony has maintained silence as Orbea's plans are being finalized. If I ever need somebody to keep a secret, Karklins could be the guy! What Tony has shared is that the new location will be 119 S. Main in Little Rock, and that there will be a media event next week to detail the plans. 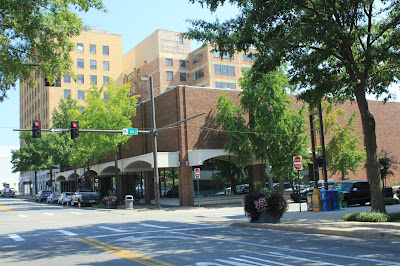 This downtown location at 2nd and Main will house the new Orbea location.
While Tony has been keeping the code of silence, I've been picking up enough bits and pieces of facts and speculation to put together a picture with only a few missing pieces.
I've heard some indications of a retail presence representing the "complete Orbea line", a product demonstration center for dealers, and a possible relocation of most warehousing and actual bike distribution to locations closer to key markets.
The store would be exclusively Orbea and would be associated with a current Orbea dealer, so that nobody is getting thrown under the bus. It would include a coffee bar. Hmm..that sounds familiar. All Orbea models will be stocked in depth to support both local retailers and others in the region.
One thing I heard that intrigued me was the reference to the "complete Orbea line". I've never really though of Orbea beyond bikes, but a visit to their website let me know that they offer a line of wetsuits and tri gear under the Orca trade name, bike kit and helmets, and international cycling travel packages, including some to Arkansas. Hey, we're international if you happen to live in Girona! Trek has what appears to be a very successful travel offering, so there is no reason that it should not be a fit for Orbea, as well.
Orbea recently introduced their 2014 models and all of the buzz that I have seen is very positive, especially regarding the mountain bike models. Orbea bikes have enjoyed good market share in Central Arkansas and the expanded presence should only increase that.
I look forward to hearing the official announcements next week,  My quasi-journalist credentials may not get me an invitation to the press conference, so I could not resist the temptation to get a little jump on the mainstream media!