We've been doing a little traveling and quite a bit of riding in recent weeks. The weather in Central Arkansas has been nothing short of spectacular and the crowds have returned to the River Trail. Behind the scenes, the work of bike advocacy and the associated politics goes on full time!

There have been interesting developments coming out of the various groups working on our behalf, but one of the more interesting tidbits came in the appearance of mayor mark Stodola at the most recent Little Rock Bike Friendly Community Committee meeting. I've noticed that the mayor usually makes a personal appearance when he either A) Has good news, or, B) Is seeking support.  As has been previously noted, projects for both the east and west ends of the River Bluffs trail section , aka Dillard's trail section, are in some stage of planning, with at least some funding in place, virtually assuring the these projects will go forward. Both will come to a practical dead end as they will rely on the sidewalk on the north side of Cantrell Road to connect to one another. That sidewalk crosses 6 driveways and has numerous other impediments that would strike fear into the hearts of the most confident cyclists during peak traffic times. 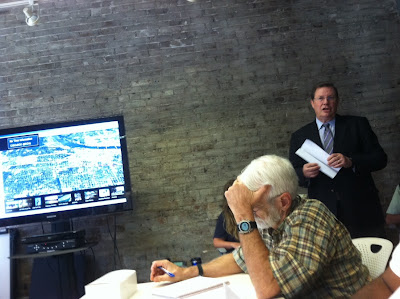 Mayor Stodola taking part in the LRBFCC discussion.
While Mayor Stodola did not make any firm promises, he said "some progress" had been made in conversations with Dillard's and then related a casual conversation at a social function at which he says he was assured that "something can be worked out" to accommodate the construction of the dramatic River Bluffs section. I'll be cautious in my attributions, but will say that I understood that remark to have come from the one person in the most likely position to make that happen. This isn't headline news, but it is certainly whisper-worthy. The Broadway Bridge construction and associated trail closures may serve to give the issue of "closing the loop" some practical breathing room, but it would also be a great time to begin construction of another major project along the trail.
I've been critical of Stodola at times, but he is a pragmatic politician with many factions to please. It may just be that the stars are aligning in the our favor.
LRBFCC: More inclusive and seemingly making progress
The mission of the LRBFCC is nominally to guide the City as it seeks "Bike Friendly Community" status from the League of American Bicyclists. Things can get pretty complex as that process requires changes in city policy, construction of infrastructure, and the allocation of resources. You can boil all of that down to "politics and money".
Committee chair and LR Bike-Ped Coordinator Jeremy Lewno is doing a good job of identifying problems and opportunities and of involving a diverse range of participants in the process.
I was particularly pleased to see LR City Director Erma Hendrix at the meeting and taking an active role. Hendrix has been critical of the South Main project in Ward 1, which she represents, and of other city commitments to bike infrastructure. Follow the link and read the article and you'll get a good feel for her tone on such things as of May 15. I won't go so far as to say that she has totally changed her mind, but I think that she has listened to the facts and has spoken to her constituents, many of whom see a benefit in improved bike and pedestrian safety, and has become active in the process rather than firing shots at the results. I commend Jeremy for reaching out to someone who could be regarded as adversarial and I commend Hendrix for being open to change.
A few bullet points from the BFCC meeting:
-A contract has been let for Kavanuagh Blvd, sharrows project
-The South Main project was bid September 11 by the AHTD. Once contracts are in place completion should take 30-60 days
-A design contract is in place for the reconstruction of Pinnacle Valley Road from Highway 10 to the rail crossing to the north.
-Lewno laid out some goals for the next couple of years to coincide with the city's 3-year street resurfacing plan. The short version is that he hopes to provide east-west and north-south corridors to connect much of the city and the River Trail with bikable streets and/or lanes.
ART System Signage
By way of the ART Task Force, Metroplan obtained a grant to provide uniform signage throughout much of the Arkansas River Trail System. If you've been our riding the trail, you've likely started seeing the product of those efforts. 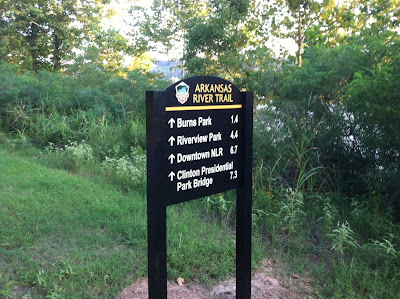 This sign is located near the Big Dam Bridge in North Little Rock.
In addition to the way finding signs like the one shown above, there are simpler directional and mile marker signs along the trail. The real beneficiaries of the signs will be visitors, along with new or occasional  trail users. There are few confusing twists and turns along the RT and it will be comforting to those folks to know the distance to their destination and that they are still on the righteous path. Thanks to task force chair Rob Stephens for driving this effort. It took input and coordination from many entities and the grant required quick execution.
ALS Bike and Hike
This is a out of the realm of bike politics, but deserves a call-out! 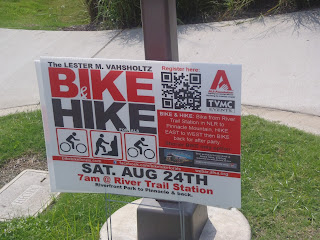 Link for complete information and registration
This cool event is organized by Tim Vahsholtz as a tribute to his father and to raise awareness of ALS. Last year, severe weather put a literal and figurative damper on the event, but this Saturday looks like sunshine and blue skies for a ride to a hike at Pinnacle State Park.
From the website:
REGISTRATION:

Thanks for taking the time to write all this up to share with everyone.

Thanks for reading. I've been really busy with everything except writing.I've been slow in posting, but there is a lot going on, so I
'll try to keep up!