Back To The Ozarks: The Pull of Push Mountain

I wrote just last week about riding Push Mountain Road with my friend and frequent ride partner Sam Ledbetter. Sam and I were discussing the opportunity to take advantage of some unseasonably cool July weather to perhaps make the ride again when Sam upped the ante.

He had been laying out what he referred to as "an epic ride" of 96 miles that would take us from Highway 14 near Harriet, down to and across the Buffalo River, north through Yellville, over the White River at Cotter, and then would wind through the back roads south of Mountain Home before joining Highway 201 to the junction of Highway 341, or Push Mountain Road. From there, we would cross the White River once again and begin climbing back toward Big Flat. I am usually pretty conservative when it comes to biting off more than I can chew and I was uncertain that I could manage this ride. Yep, I was chicken, fearing failure, so I said, "OK".

That was followed by some negotiation, as I was concerned not only about the distance and the fact that I assumed there is not a flat place to be found on this route, but that Highway 14 is narrow, curvy, and can be busy on a holiday weekend as folks make their way to enjoy the White and the Buffalo. The previous week's tragedy at McCrory was fresh on my mind and I knew that Sam had some concerns about traffic, as well. In the end, we elected to ride from the Rock Creek Cemetery northwest of Harriet and finish at the soon-to-be-operational Gravity BrewWorks at Big Flat. Sam's neighbor, Doug, agreed to meet us at the brewery at the end of our ride.
We got an early start and soon found ourselves descending to the Buffalo River, giving up 600-700 feet of altitude that we knew we would earn back soon enough. The climb out of the Buffalo was gradual and the following miles up to Yellville and Summit were surprisingly easy going. 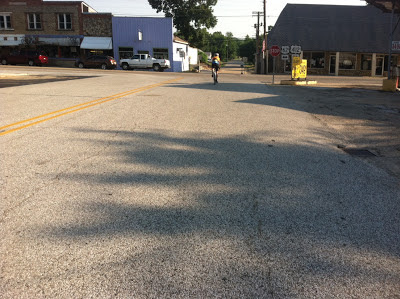 Things were quiet in Yellville early on a Saturday morning. As we passed, I spotted a storefront with a number of bikes mounted on the awning in front. Bike shop in Yellville? Nope, just a pawn shop but might be worth a stop sometime.
As it turned out, the traffic was remarkably light on Hwy 14 and the drivers were unfailingly polite in passing. We made our way east through Flippin and then made our first crossing of the White River at the historic old Cotter Bridge before heading on to Gassville. Considering the geography, the ride had been relatively flat, even as we left Gassville and rode out Buford Cutoff to Highway 201 to Highway 341, aka: Push Mountain Road.

EDIT: Fact versus perception- Sam's Garmin disagreed with my Google Earth assessment of any part of this route being flat! 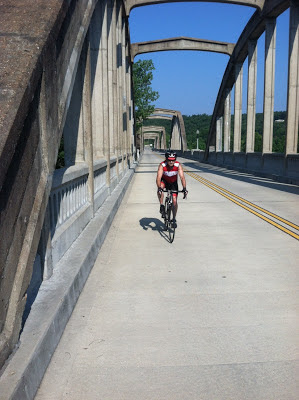 Crossing the Cotter bridge on Highway 345
As I'm writing this and rolling over our route on Google earth, I'm surprised at how little the elevation changes over much of our ride. The area north of the White is a bit of a plateau. There are some long rollers and gains of 50-100' but it was the kind of up-and-down that allows you to maintain some momentum. 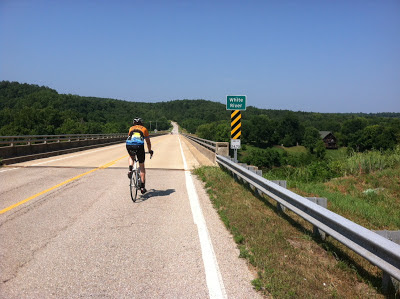 Sam heading across the White River at the Hwy. 341 Bridge. This was the line of demarcation for pain as far as I was concerned. 25 miles on Push Mountain Road starts here.


I was already wearing bit thin, and we got over any possible disappointment at the lack of gravitational challenges as we crossed the White for the second time of the day. I had forgotten that the climb out of the White was actually two long steps with a false flat in between, and it was painful when I realized that I was only halfway up the first big climb on this leg of the ride. We knew what lay in store for us from there and marched on to Big Flat. On our last Push Mountain ride, we at least got to enjoy the big descents before having to engage the big climbs, and my legs were not anywhere close to fresh as we were 50 miles into the ride. I suffered over the last miles and found Sam waiting for me at the Highway 14 junction as I finished the final climb on 341, which seems to be strategically placed just to let you know that the road isn't done with you, yet.

From there, it was just 3 miles to Gravity BrewWorks. We were a few minutes behind our ETA and Doug was pulling out of the driveway to look for us as we rolled in. It had turned out to be a hot day in the Ozarks and we were salt-encrusted and tired, but this ride had been a beauty! I can't think of many better ways to spend a Saturday morning than riding in and out of a half-dozen river and creek valleys, along ridges and through small hill towns in the heart of the Ozarks.  The ride was 80 miles and had 5650 feet of climbing, much of it concentrated in the last third of the distance. This, for me, was a challenging, quality ride.

No, I won't bore you with weekly trip reports, but...
I know this report is a little redundent to the earlier Push Mountain write-up, but, hey, I don't get out much! Over the years, I've wanted to do some road rides in the Ozarks and often envison myself on the bike as I drive to this area on business or for boating, but I've been put off by the distance of driving to the ride and, as much as anything else, fear of the traffic on unfamiliar roads. As it turned out, our concerns about the traffic on Highway 14 in the early morning hours were overblown and Sam had done a good job of putting us on little-traveled back roads when he could. To our surprise, we encountered two other cyclists along the way, one riding locally near Rim Shoals along the White, and another lone rider heading north as we rode south on Push Mountain Road.

The experience reminds me that as cyclists we have thousands of miles of rural Arkansas roads waiting on us to find them.

A note about Gravity BrewWorks

Billy Riffle and Tony Guinn are in the process of building a microbrewery in the small burg of Big Flat. Billy and Tony live in the Mountain View area, where Tony does her career thing with the USDA Forest Service. It is an interesting proposition, but the word is the Billy makes very good beer. Big Flat is in the corner of Baxter County, which is wet, so we look forward to visiting the tap room when Billy and Tony get things up and running.
Posted by JBar at 8:10 AM