Along The Trail: Progress Report and Backward Driver

Many of you may have noticed an announcement a couple of months ago that funding had been approved to add lighting to the Junction and Clinton Park Bridges. That work is about to get underway and an immediate result will be Monday-Thursday daytime closures of the bridges. 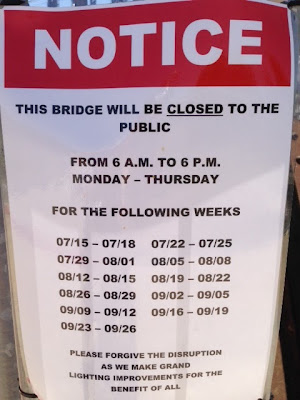 These signs have appeared on the Junction and Clinton Park Bridges.
Photo provided by Diane Barton
As noted in the sign copy, the lighting improvements will be grand. Basing my judgement on the effect of the lighting on the Big Dam Bridge and the Two Rivers Bridge, if the plans for the downtown bridges are similar, the improvements will indeed be grand.
Medical Mile Washout Repairs and Bridging The UP Tracks 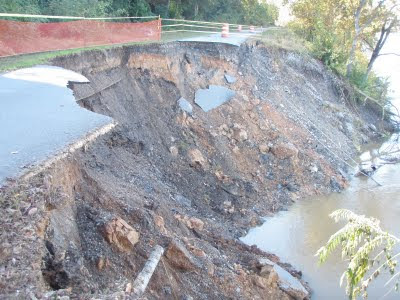 Medical Mile washout in 2009
Way back in the fall of 2009, flooding rains caused a washout of a portion of the Medical Mile of the Arkansas River Trail. Given that the trail section ended with a dead end at the Union Pacific RR line, not many trail users really noticed or cared. The event was more of a curiosity than an inconvenience for riders, and there was little pressure to make the expensive repairs. Well, repairs are now underway. Little Rock received some grant money and a contractor is at work.
LR Board of Directors Approves Trail Improvement Project
What I called the "Trail to Nowhere" in November of '09 will now have a western counterpart. The Little Rock Board of Directors approved a resolution to allow construction of a trail segment on the north side of the Cantrell Road viaduct through the Cantrell Marine property to Cantrell Road in front of Dillard's HQ.
SYNOPSIS
A resolution to authorize the City Manager or his
designated representative to execute all appropriate
agreements and contracts necessary to expedite the
construction of the River Trail River Bluffs Connector
Improvements Project (west termini).
FISCAL IMPACT
Funding for this project will be from the Transportation
Alternatives Program (80%) and City Match Funds from
the grant match account. The total estimated project cost
is $487,500.00.
BACKGROUND
This project authorizes the City Manager to sign grant
award documents and to execute agreements with
Metroplan and the Arkansas Highway and Transportation
Department for funding a portion of Arkansas River Trail
Improvements near Cantrell Road at the western termini
of the River Bluffs segment of the trail consisting of a
trail connection from North Cantrell Road at Gill Street
eastward through the Cantrell Marine property.
This project may not make a lot of sense in the immediate scheme of things, but it gets the Arkansas River Trail two steps closer to the mythical "closing of the loop". I don't pretend to know where negotiations stand to allow for the construction of the ambitious River Bluffs Trail along the river behind Dillard's, but the connectors will be in place when that bright day finally arrives.
Arkansas River Trail System Makes Google Earth
As you may recall, the ART System includes 88 miles of trail and highways in Central Arkansas. I was using Google Earth to scout a ride recently when I noticed that Arkansas Highway 365 is designated Arkansas River Trail! I follow up and found that the map guys at Metroplan got the designation added for to Google Earth for the system.
Signs Are Meant To Be Read
I was finishing a ride last week and as I pulled into the parking lot near Victory Lake in Burns Park, I noticed a black sedan cruising along the River Trail toward me with two women inside. It takes a little bit of effort and a whole lot of ignorance to get on the trail at this point, but here they came, driving along at 20-25 MPH.
I responded by pulling out my phone to take a photo, as I am always on the alert for blog material. When the young lady driving saw me taking that action, she stopped, put the car in reverse and started backing furiously in the direction from which she had come. 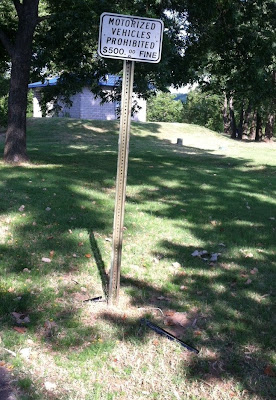 Reading the sign is less costly than hitting it. Note the door trim in the grass.
Some folks can drive fast in reverse and some can't. Her level of expertise at "mirror driving" was at the "can't" end of the scale, as she veered off of the trail and into a post on which was mounted a sign carrying the message "Motorized Vehicles Prohibited". Both passenger side doors of the car were damaged and they left a small debris field at the base of the sign as a warning to others. As they drove away, I noticed that the car still had temporary tags, and the repairs will likely exceed the promised $500.00 fine.
Posted by JBar at 4:17 PM

Clearly, the camera phone, like the pen, is mightier than the sword. In other news, I saw a pack of segways on the BDB and then rolling down the river trail itself. Could have been a couple thousand dollars toward some trail improvements. Do you know if there is someone we can call when we see these things?

Sorry to just have seen this. The Segway tour operator asked and was denied permission to use the RT on the NLR side (per Kate Finefield, former NLR park ranger). I saw a gaggle of them one day and asked kate bout the motorized vehicles. They told her they had permission to use them in 2RP from Pulaski County. I have not confirmed that, nor do I know where LR stands.
I see no place for a motorazed vehicle weighing a couple of hundred pounds parading on a multiuse trail. And, what could look goofier? If you go to segway sites, among the FAQs you'll likely see questions about multiuse trail. They try to put Segways in the same category as motorized wheelchairs to say it's OK. Most of the time, it's not.