The collapsed culvert at the base of River Mountain Road has been a pain in the ass for cyclists, walkers, and baby carriage carriers alike, but work is finally underway to make repairs. 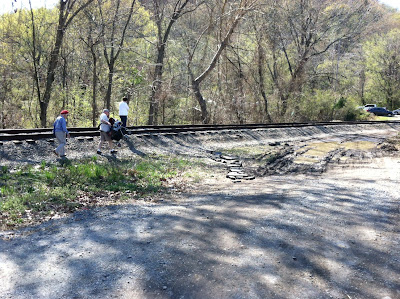 Muddy conditions have made bypassing the area of a collapsed culvert difficult. Users created a path from broken up asphalt, but it was not "wheel friendly". 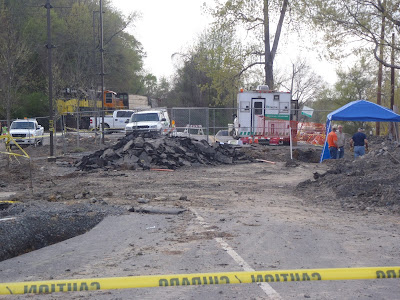 I was preparing to call out the city on the lack of action last week, but a crew showed up on Saturday to start moving a fiber optic cable to allow for installation of the new culvert.
This project has seemed to be excruciatingly slow, but progress is finally being seen. The parking and access limitations, along with bad weather, have cut down on the use of Two Rivers Park, though traffic from the west end of the park seems to be up appreciably. Folks love the park and will not be denied!
Tuesday Night ACF Rides
I have been advised that Arkansas Cycling and Fitness will not be holding the popular Tuesday night group rides from the submarine parking lot this year. Thanks to Dan Lysk and Addie Teo for their support of this ride. I'm sure that riders will still show up as these things tend to take on a life of their own. Having been involved in the evolution of the Fast Girls Slow Guys rides a few years back, I would advise that participants in this ride be aware of the scrutiny that groups get on the River Trail and stick with the practice of taking it easy on the trail and saving the speed for the open road areas.
Motorized Vehicles On The Trail
On two of my last three rides, I've encountered motorized vehicles on the River Trail in North Little Rock. On Sunday, it was a car full of young men on the closed portion of River Road, and on Monday, I crossed paths with a couple on a scooter on the trail at Big Rock Quarry. 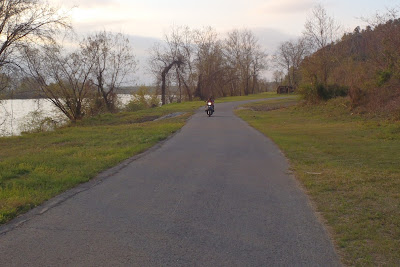 I'm not sure if sign reading is a lost art or if people just think that the signs prohibiting motorized vehicles apply only to others. This lovely couple was enjoying a spin on the River Trail.
Small Concession on Cantrell 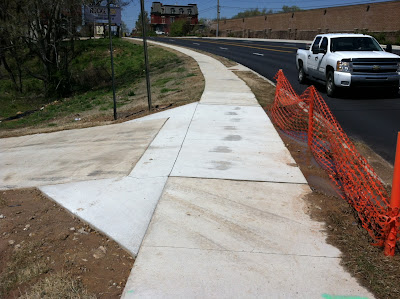 The AHTD followed through with this modification of the sidewalk junction near the Collegiate School /North St. trail patch at Cantrell. Thanks to BACA for extracting this promised bit of action.
Snakes On The Trail
They're back! While shifting my attention to a scattering bunch of pedestrians in Two Rivers park last night, I ran right over the subject of their aversion---a good-sized and very angry cottonmouth, seeing him in time to look right down into his (or her?)  wide-open mouth, but not in time to avoid him. I hold no malice towards snakes, but this species is to be avoided. Cottonmouths are prevalent in Two Rivers, while drier wooded areas of Burns Park seem to have cottonmouths and copperheads in near-equal numbers. The copperheads are prettier and less aggressive but are still not to be trifled with! With warm days and cool evenings, snakes are attracted to the retained heat of the asphalt trails as the sun goes down. Be careful out there!
Posted by JBar at 9:23 AM