Along The Trail: Dry Holes and Unfinished Business

Once again, the weather has tossed Central Arkansas riders a curve in the form of a day in the high 80's, followed by severe storms, followed by temperatures in the 30's on this Saturday morning. It's late April and we should be well past mornings in the 30's, but the day warmed quickly and riding conditions were perfect by midday!
On the sprinkling of nice days that we have had to date, the trail system has been busy with the usual uptick of occasional users mixing with the regular trail crowd. There is seldom any conflict among the folks who are frequently on the trail; however, when the weather gets good, it is accompanied by larger crowds, many of whom have no idea of the notion of trail etiquette. The result is a marked increase in the volume of dog feces littering the BDB, many unattended children allowed to run unfettered, and oblivious meandering walkers. There are many sub-categories within these groups but one of my favorites is " the backing photographer". You'll see them as they pose their subjects against the BDB or Two Rivers Bridge rail, with a sunset and Pinnacle Mountain serving as a fine backdrop for a photo. Then, they plug the viewfinder to their eye and start backing across the width of the bridge as they frame that perfect shot. Their concentration is often such that their hearing seems to be turned off, as they become deaf to warnings from approaching riders and runners. They then seem baffled when they return to reality and see that they have stopped traffic.
Comments of this nature are often followed by complaints about rude riders, etc, etc.
There are a'holes in every crowd, of course, but I'm speaking in general terms here, and there seem to be fewer rider-caused issues these days. It is likely a function of enhanced riding opportunities out west and peer pressure from within the riding community, but I just have not seen much in the way of bad behavior from the road rider crowd.

BE ALERT, BE POLITE, STAY RIGHT
I developed this little mantra as an easily remembered catch-all for trail behavior. It pretty much covers every situation and is something that kids can teach their parents. 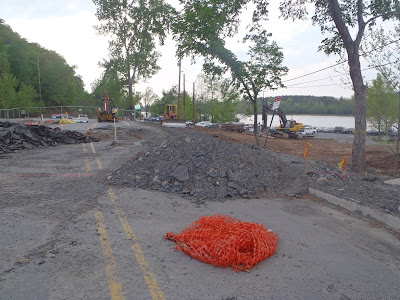 The equipment is in place, but the operators were AWOL when I stopped by on Wednesday. Reports indicate that they were at work on Saturday.
I contacted city officials a couple of weeks ago about the schedule for completion of repairs to the blown out drainage culvert that cuts off easy access to two Rivers park from River Mountain Road. I was informed that a fiber optic lines was to be moved and then repairs would take a week to 10-days. The fiber optic line was moved right on time and heavy equipment appeared on the site. I checked the area on Wednesday, but the machines sat unmoved. It's kind of amazing that within a matter of days  Exxon can get a high volume (high profit!) pipeline repaired in the midst of an environmental and human disaster in Mayflower while the City of LR still cannot seem to get a culvert repaired after 3 full months. The collapse of the culvert was reported here on January 15 and, at the time, it was predicted that repairs would take 6-8 weeks. That was deemed a ridiculously long time for a fairly simple project that has now dragged on for over 12 weeks, but it appears that the end is in sight.
Dry Holes: Water, water....I need...water The water fountain near the BDB on the Little Rock side has been turned off for the last couple of weeks, as has a fountain on the trail near the Burns Park dog park. I contacted Jeff Caplinger in NLR and bike-ped coordinator Jeremy Lewno in Little Rock. Both promised to look into the problem. As of Saturday, the fountain at the BDB was on, but the NLR fixture remains dry.  Riders, runners, and walkers count on these places to refresh and resupply, increasingly so as the weather warms up.
Slackers
You will occasionally see slack-line walkers around parks and campsites. My understanding is that the activity grew out of the climbing community as a means of enhancing balance, showing off, and killing down time around base camps. Most of the lines I've seen are maybe 10 yards long. A couple of weeks ago, I noticed that some guys had strung up the longest slack line that I have ever seen---100 yards long!! They were enthusiastic, but limited by their hardware; they just didn't have enough mechanical advantage to pull the line tight enough to mount and to keep it off the ground. 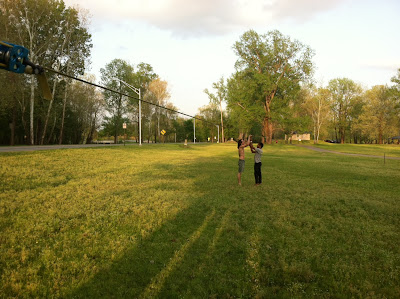 I encountered the guys on their second attempt at the 100-yard slack line. Additional blocks and pulleys allowed them to get the line taut enough, though the wind kept the webbing vibrating and bucking. 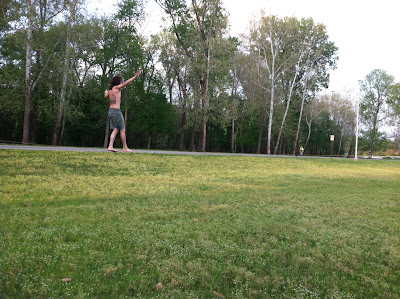 Success! I didn't stick around after the initial walk, nor did I accept the offer of giving it a try!
One of the many things that I enjoy about the trail system is that you never know what or who you will encounter, though it is almost always someone enjoying something that they love and are willing to explain or share.﻿
Posted by JBar at 3:19 PM