Trail Link Near BDB: Closed By The Corps 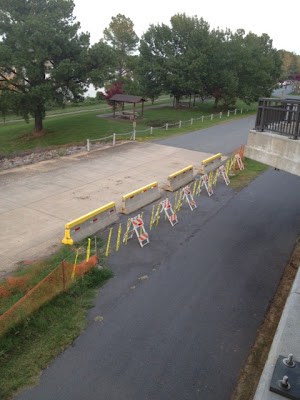 Sharp-eyed reader Chuck Hitt sent me this photo taken from the BDB east ramp, along with an inquiry asking, "What the hell?!"  Well, I paraphrased that, but I appreciate Chuck's sending the photo. This little strip of asphalt allowed riders to avoid the congested area at the foot of the BDB and to jump between the dead-end road serving the dam and the River Trail. While some of us have poked fun at its size as a measure of Little Rock's commitment to trail improvement, in reality, it was a very good thing and greatly enhanced the safety of the trail intersection. There has been some temporary fencing across the road, which I assumed was there to accommodate construction traffic for the west BDB ramp, but on Wednesday, we noticed these more substantial barriers. An inquiry to Bryan Day, Asst City Manager, resulted in this information from Mark Webre:


"Corps of Engineers’ staff at Lock and Dam #7 has had numerous close calls with cyclists.  Corps management has decided to minimize their exposure to this liability and have moved those barriers to that passage way.  They further requested that that passage way be removed and a fence be put up to prohibit cyclists taking access off the trail onto their drive way.  Eventually, they will be building a gate just west of the BDB congestion area to ensure no further access onto their drive way.

I did point out that vehicle/cyclist collisions still exist east of this, but their response was at least they are minimizing their risks to some degree.

I can try to improve access around congested area by working with Corps in moving the gate location back some to the west.  I will keep you all posted on that progress."

So, don't blame Little Rock for this deal. They are trying to support us and will work with the Corps to try to retain a similar crossover a little further to the east. It appears that LR's options will be dependent upon the C of E's cooperation.

Thanks again to Chuck, Bryan, and Mark.
Posted by JBar at 9:47 PM