As almost all of you are certainly aware, there has been a great deal of discussion about the replacement of the Broadway Bridge spanning the Arkansas River between the downtown areas of Little Rock and North Little Rock. There was a proposal backed by the mayors of both cities to build a new bridge at a location upstream in order to avoid the traffic mayhem of an extended bridge closure. There have been public comment periods, meetings, design contests, and letters-to-the-editor waxing eloquently about the values of a creative design and the opportunity to create an iconic structure that would help define our city. After all of the chit-chat we're pretty much back to the original proposal- a utilitarian plate girder bridge. While I hesitate to say that such a design defines our city, it does pretty much define the role of the Arkansas Highway and transportation Department, the controlling entity in this project. The AHTD's focus is on building a functional structure designed to move as many motor vehicles possible as rapidly as possible, with the shortest disruption of traffic and at the least cost. 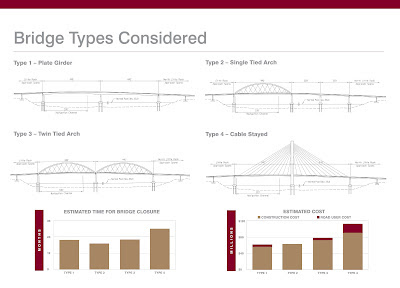 We won't be getting anything like the Golden Gate Bridge here in Central Arkansas. AHTD

The time has passed for influencing the basic design of the bridge. The AHTD has steadfastly stood by its original plans with little flexibility and the federal dollars allocated to the project require a timely start. i won't attempt to revisit that discussion, but the plans are pretty much complete for construction to begin in 2013.

The new bridge does include a mixed use lane for cyclists and pedestrians. I will describe it as "better than nothing", and it is the minimum width allowed by federal standards. It will be 16' wide and will be intended to carry cyclists and pedestrians traveling in both directions. As our center-city attracts population and the demand for alternative transportation grows, this accommodation will hopefully become woefully inadequate. The design of the entry and exit ramps for the new bridge are designed for a high speed flow and merging of traffic. Likely good for cars traveling at 40+ MPH, but that same arrangement has been referred to as a "kill zone" for cyclists attempting to avoid mixed traffic in the bike-ped lane and navigate the traffic lanes of the new bridge. 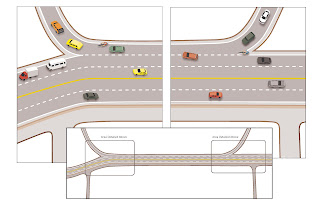 The transportation planners at Metroplan have requested that the AHTD expand that lane to a minimum cross-section of 20' or, preferably, a 25' cross-section. Metroplan 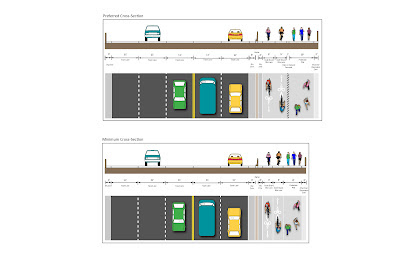 The added width to the bike-ped lane is likely to cost a couple of million dollars; not chump change, but it should not be a deal-breaker for a key transportation link that should serve us for a half-century or more. Central Arkansas should have at least one viable bicycle-pedestrian link crossing the river downtown if we are ever reach the goal of being bike-friendly. This is about transportation and the AHTD plan lacks vision when it comes to non-motorized modes of transport. Look at most of the great cities of the world and you will see cities that embrace cycling, walking, and public transportation as an alternative to driving across town to Walmart.

Here's where you come in....
There is a public comment period on the AHTD's website that will accept your comments until September 25. Click here to access the form. Most of the questions on the form have been settled, but you can scroll down and check Pedestrian/Bicycle Facilities and then have your say.
Here are some key talking points from Metroplan:

·         -Cycling commuting will become more popular in the future with the development of more urban housing and trail systems.

·        - Serious cyclists and commuters will avoid this mixed use corridor and ride in the vehicle traffic lanes.

·         -The new proposed bridge will have wider lanes and wider turning lanes that will facilitate faster vehicular traffic (>40 mph) and cause more vehicle/cyclists accidents.

·         -A 25’ divided pedestrian/cycling section is the best solution because it physically separates wheels and heels. This will allow for cyclists to travel safer and reduce user conflicts with non cyclists.

·         -A minimum of 20’ pedestrian/cycling section is an alternative, but does not segregate cyclists from pedestrians and will create conflicts during peak usage.

·        -The bridge design should allow for pedestrians and cyclists to access the ART easily.

If I'm being a bit of a shill for Metroplan here, it is because I feel that they are better representing the interests of the cycling community than the AHTD. The AHTD is a constitutionally independent agency; a status that insulates them from undue political pressure but one that can also make them aloof and insulated from the will of the people.
Let's at least let them hear from us. It is not beyond the realm of imagination to believe that we can be a voice of change. Let them hear from you.
Posted by JBar at 9:41 PM

I live and work downtown and choose to bike to work.

Would there be a problem using your car to drive over the Scott Street bridge? Then we wouldn't even need a new bridge. That would save us alot of money and would allow for me to have a Broadway bike bridge with easy access to the places I need to go. But I'm assuming the answer is no to that question.

Think about bikes as transportation, not just as recreation.

This bridge will serve the city for many decades to come. It is short-sighted to ignore the opportunity to create a viable bike-ped transportation artery in downtown. It is likely a once-in-a-generation opportunity. While I don't mind riding the Main Street Bridges or Broadway at off-peak hours, riding either at rush-hour is something that I don't have the courage for. As for riding to the Clinton Park Bridge, few commuters, either drivers or cyclists, would choose to add 15-20 minutes to their daily drive. The AHTD is currently spending close to 40 million dollars of taxpayer money to ease the commute of those folks who choose to live in Conway and work in Little Rock. The cost of enhancing the Broadway Bridge design is roughly equal to 1 mile of interstate lane-widening, and unlike interstate highways, bike-ped ways seldom if ever need resurfacing or maintenance.