Note the word system. Several weeks ago, I noticed a reference to the Arkansas River Trail Task Force, chaired be a gentleman named Rob Stephens. I was unaware of the task force or its purpose so I set about making contact with Rob, introduced myself and asked for a bit of his time. He kindly agreed and we met for a cup of coffee. 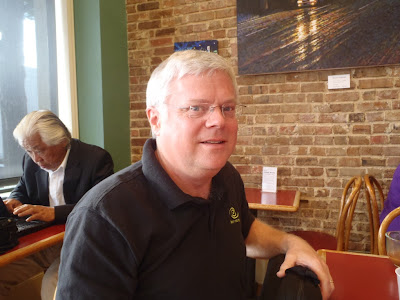 As it turned out, Rob is a long-time volunteer and has been very involved with the Boy Scouts and, in addition to the River Trail Task force, he wanted to talk about Leave No Trace. I had always associated Leave No Trace with outdoor ethics as applied to the camping, hiking and boating in forests and wilderness areas, but had never really associated  the movement with an urban system. That's where their Front Country program comes in.  The front country guidelines as I understand are primarily concerned with day-use areas like parks and trails, though the principles apply anywhere. Here are some guidelines taught by LNT:
Plan Ahead
Stick to Trails
Manage Your Pet
Leave What You Find
Respect Other Visitors


Trash Your Trash
Rob is passionate about applying these principles to our trail systems. I'm not doing his efforts justice here, but the links will provide you better information.

So, what has the task force done? A lot, as I found out at a recent meeting to which I was invited. They have, working with Metroplan, hammered out an agreement to create the Arkansas River Trail System that covers several counties and municipalities to expand the current system to include 88 miles of connected roads and trails. The goal is to have uniform recognizable signage and, to the extent possible, uniform policies of use.

While at the meeting, I sat with Marsha Guffey of Metroplan, whom I had met at the LR Bike Friendly Committee. Marsha offered to share  information regarding the plan and the upcoming signing of a Memorandum of Agreement to make the system a reality. Here is the information provided by Metroplan: 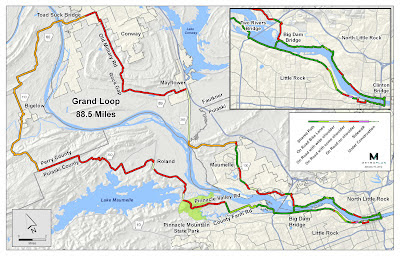 On June 1, the local officials will meet to sign the Memorandum of Understanding.  Secretary of Interior Ken Salazar has been invited to attend and the public is most cordially asked to attend. (Note: Location of the signing is yet to be confirmed. Originally slated for the BDB, it was decided that the crowd would likely be better accommodated elsewhere, possibly at the Clinton Library.)

Signatories to the MOU include:

The MOU will be supplemented by additional agreements, still being drafted, to cover law enforcement/safety, minimum trail standards, maintenance standards, signage and wayfinding, and trail etiquette. A logo has been adopted by the group (to be copyrighted), and consultants will be hired to develop a new website and mobile website  at www.arkansasrivertrail.org..

Folks, that's some exciting stuff and shows what can happen when communities have broad support from the public and pull together toward a common goal. I've been slow to get this article out and there will likely be some updated information to follow soon.

The idea is pretty darn cool isn't it? I'm looking forward to having a system that ties such a long stretch together. I hope it goes a long way toward the acceptance of the typical "users" of such a system, on foot or by pedal.

88 miles very impressive. We are so lucky to have these hard working folks in our city.

Cool Plan, but let's work on closing the current Loop first. As safe as riding road bikes down sidewalks with pedestrian is.

Closing the loop would be nice, but it is a huge hurdle (it shouldn't be, but the political reality is that LR is not going to take on the Stephens/Collegiate School interests) to solve a medium problem. It won't and should not be a show stopper for the rest of the system. The is some vision behind this system plan and it can be a nationally attractive asset to our state. The bigger the Trail System, the more pressure to fix the Cantrell Road stretch.