On a Saturday morning at the Truck Centers of Arkansas Galloway exit location, the trucks were stacked up as usual, thanks to the number of major truck stops located here. There were big rigs lined up wherever you might look, coming and going from every direction. Just as I was about to decide that this was no place for a bike race, I pulled past a lot full of trailers to see before my eyes a veritable swarm of cyclists. Sponsored by CARVE, presented by Dr. Feelgood, the Cross Winds Classic saw perfect weather and drew impressively large fields, with CAT 5 being split into age groups when the field surpassed 50 riders. 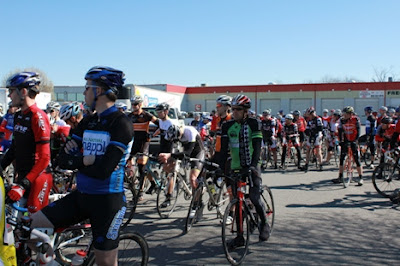 Many races struggle to attract enough riders to fill out all of the scheduled fields. That was not a problem at the Crosswinds Classic.

I wanted to go out to see some racing and was undecided on my approach until I saw that my friend Chris Randle post that he was driving the Spokes bicycle shop team van as a wheel vehicle. I got in touch with Chris and we met at the start area to put placards on the bus and load wheels for the Master 40+ and 50+ riders. Our job was to follow the main field around four laps of the 13 mile circuit and stand ready to provide a quick wheel change or any other assistance that might be required. The riders were led out of the truck center and through a neutral zone by police officers in marked cars and on-course officials on motorcycles. The neutral zone, in which riders are paced and the racing has yet to start, got the riders past the truck zone and on to the very lightly travelled race course, where the escorts pulled off and it was "game on". 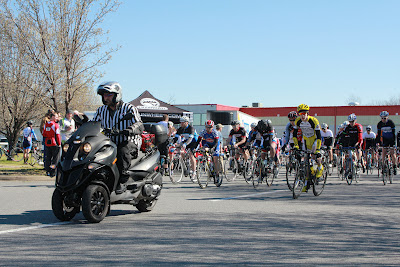 The Cat 3's heading out to the course. Conditions could not have been better, with temperatures in the high 50's, sunny skies, and light wind. 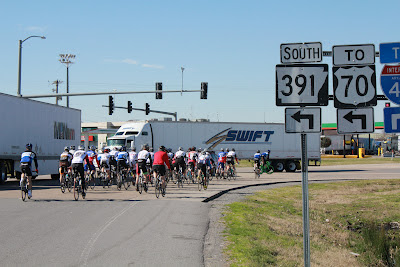 We followed our pack out through the neutral zone, having been joined in the van by Stephen and Randi Lynn Durham. The area around the Galloway exit is pretty much one big truck stop.

The course is flat, but the area is known for punishing winds, particularly this time of year, which could have created tactical racing, big gaps, and more crashes. As it was, many of the fields stayed pretty much intact or broke into a couple of packs. There was some grumbling from experienced riders in the Cat 5's that nobody was interested in racing. I think that is largely a result of the lack of team structure among the 5's so that none of the individual riders were willing to throw down work at the front in efforts that would ultimately only benefit their rivals. A couple of strong riders reported that they attacked only to find themselves alone off the front too early in the race with no interested chasers with whom to work. Note to Cat 5's: Find some buddies at the start and agree to work together.  Our Masters class saw a group of 8-10 riders go off the front fairly early and stay away. The efforts of a few other riders failed in attempting to bridge the growing gap and the front group was soon out of sight. 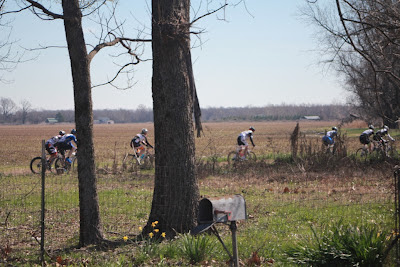 After three laps in the Spokesmobile, I asked Chris to drop me at the finish line/feed zone so that I could see some of the finishing sprints and try to get a different perspective on the race. There was a nice crowd of supporters along the road with Steve Shepherd and Ian Hope, along with promoter Fred Phillips, maintaining the organization and keeping track of status and the finishing order of the several races still on the course. This is a daunting task, but the crew was well-organized and had a lot of help, including a finish line camera operator, to track the finishing orders. 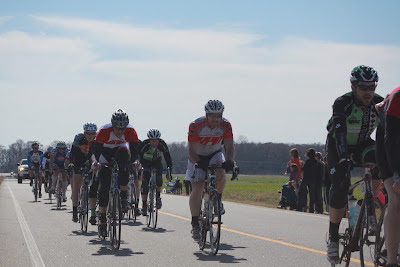 There were some large field sprints, like this bunch of Cat 4's, which made things exciting for the supporters lining the road near the finish line. 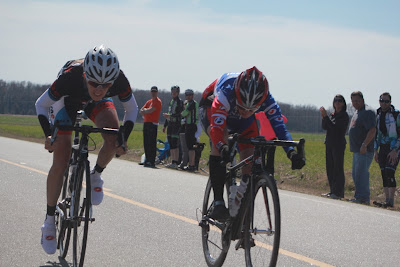 This women's finish came down to a hard fought two-up sprint. 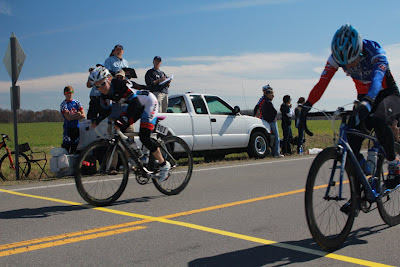 And it doesn't get much closer than this as Tammy Bray pips her rival at the line. 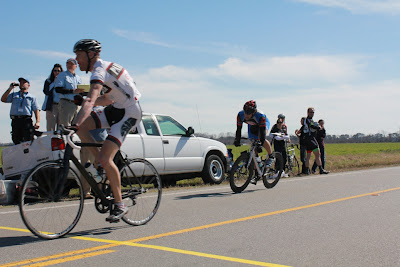 Kris French celebrating the win in the Cat 1-2 sprint.

The Cross Winds Classic was a huge success by any measure. I've talked to quite a few riders who are already laying down strategy for their next road race opportunity, and the huge turnout confirms that there is a certainly an appetite for more road racing locally and around the state. The organization was good, all the fields were big enough to race, unlike some events that combine classes to have enough folks to compete, and many were really huge with 40-50 riders, the race course was well monitored and safe, and the racing was good.Throw in perfect weather for good measure. I've got to give CARVE a nod for bringing road racing back to central Arkansas. The current club leadership group is doing a great job in not only promoting race events like the Fourth of July Star Spangled Criterium  and the Cross Winds Classic, but also in promoting mountain bike and juniors cycling, holding beginner rides, raising money for causes like Teen Challenge and CARTI, and directly supporting local cyclists with the River Trail work station. CARVE has an ambitious agenda and I look for more good things from them. I'd be remiss if I failed to also give a shout-out to Dr. Feelgood himself, longtime cycling supporter Dr. Steve Tilley. Thanks, Doc.

Check here to see race results when posted by DLT.

Great writeup for a great race. Just wanted to mention the bad crash in the 4s - I hope everyone is ok!

Good write up JBar! and Good job DLT and everyone else involved with the race. I'm trying to think of critiques, I wish there was a hill or something to divide the men from the boys, yellowline rule always sucks but whatever and $35 was DAMN pricey...but it was a fun cool event and a good location choice.

Awesome race! And BTW, going on the attack is what separates the men from the boys.

How did you get your bike? your food? your clothes? by a truck... Thank a trucker ... he brought you your shit!