This is for all of us losers that did not attend the Full Moon Walk on the BDB Sunday night and for those folks who did attend only to find that there was no moon in sight. I'm sure it was still a wonderful evening and there appeared to have been a great turn-out. 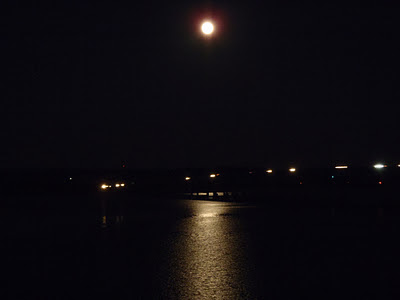 The full moon, as seen from Two Rivers Bridge.
OK, I missed the Big Dam Bridge Moon Walk after planning to attend and even confirming my plans with a prominent BDB Foundation board member as late as Sunday afternoon. My responsibilities at home got in the way, as I had promised Diane that I would cook a pot roast, a commitment that I did not take lightly! The Moon Walk date was a bit like President's Day; not really the date of an actual event, but close enough for a convenient compromise. This lunar cycle was not a complete bust for me, however, as I was out on the bike Thursday evening to enjoy the moon when it was actually full, and it made for a spectacular evening along the river.
I was determined to get some photos, but with a hand-held pocket camera, shooting at night is hit or miss, usually miss, but this shot from the BDB of the moon rising came out remarkably well. 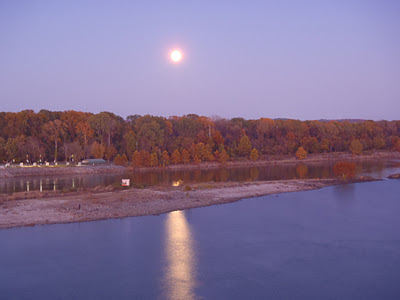 I was surprised by the colors of the trees in this long exposure, as they were not nearly so distinct to the eye. It was about 6:30 when this was taken, well after dark. 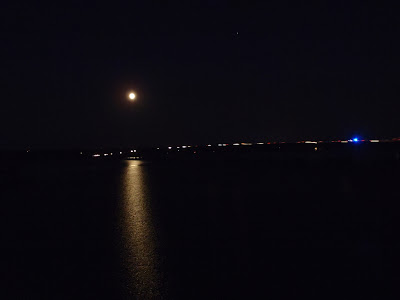 This view of the moon over the I-430 bridge is a better approximation of being there. Jupiter appears above and to the right of the moon, while a state trooper's blue light to
the right completes the triangle.
Riding the trail at night is a lot of fun, but does require lights and close attention to deer, skunks, and invisible walkers in dark clothes. Even the most drably dressed runners are usually given away by Scotchlite on their shoes.

Your pics are beautiful.